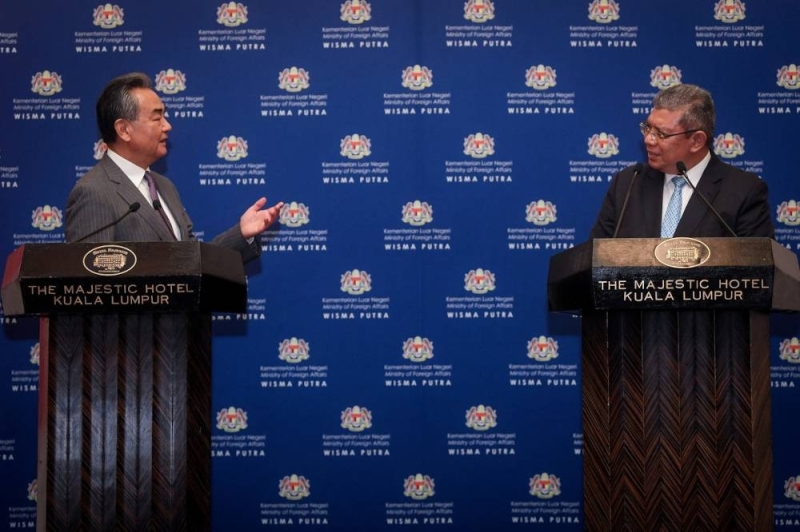 Wang who is on his two-day official visit to Malaysia starting yesterday, said China will also make an early arrangement for the first group of Malaysian students to return to China and resume their study at an early date to help them achieve a dream of their life.

He said both sides also planned for significant increase in the number of direct flights between China and Malaysia that is consistent with the aspiration of the people of both countries.

“We’re confident as the Covid-19 situation continues to be managed, the people of our two countries can visit each other as often as possible, as members and relatives of the families,” Wang said of the efforts in enhancing all spheres of bilateral ties and people-to-people contact.

He said this during a joint press conference with his Malaysian conterpart Datuk Seri Saifuddin Abdullah which was held after their bilateral meeting, here, today.

Wang said both countries will also leverage on the opportunities offered by the 10th Anniversary of the Establishment of China-Malaysia Qinzhou Industrial Park, to put in place a pilot zone for innovative economic and trade cooperation as well as a demonstration of production capacity cooperation of the Belt and Road Initiative.

“We will foster new growth point in digital economy and other areas so that we can jointly improve our competitiveness and level of development,” he said.

Wang said he and Saifuddin also discussed Malaysia-China Blueprints for connectivity and will redouble efforts to advance the East Coast Rail Link (ECRL) project and the development of areas along the line.

“We will stay in communication on the construction of the Singapore-Malaysia railway,” he added.

He said both countries also looked forward to the completion of the central line of the Pan-Asian railway link to achieve interconnected development and speed up the process of regional integration through the connectivity of China, Laos and Thailand railways.

On a lighter note, Wang said he was impressed with the Musang King cheesecake served during his meeting with Prime Minister Datuk Seri Ismail Sabri Yaakob earlier today.

“Well, this morning I had a working lunch. The prime minister served Musang King cheesecake as dessert, which is so delicious. And I’m so impressed,” he said. — Bernama