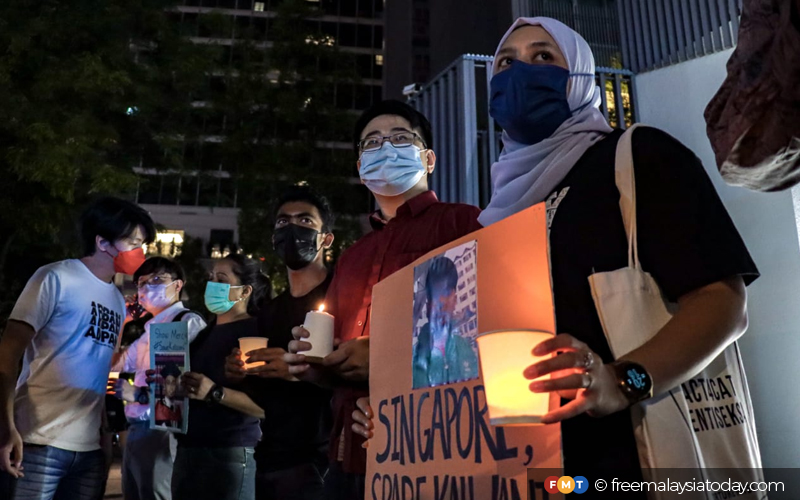 KUALA LUMPUR: A human rights group says it will continue to protest the death penalty, even as another Malaysian is scheduled to be hanged in Singapore tomorrow.

Kalwant Singh will be hanged in the city-state after the Singapore Court of Appeal dismissed his final appeal for a stay of execution.

The 32-year-old was convicted of possession of 60.15gm of diamorphine and trafficking 120.9gm of the drug.

He was arrested when he was 23 and had spent the last nine years in prison.

Amnesty International Malaysia’s Brian Yap said the continued executions were untenable and did not solve any problem.

“(Even) if we are unable to halt the execution tomorrow, we will continue to protest.

“We will not be silent, we will continue to raise our voices against the death penalty,” he said at a candlelight vigil for Kalwant outside the Singapore High Commission here.

Yap reiterated calls for the Singapore government to repeal the death sentence, adding that those who were sent to the gallows had been victimised or were in desperate situations.

The vigil saw a group of 15 representatives from the Anti-Death Penalty Asia Network, Lawyers for Liberty, Suara Rakyat Malaysia and Amnesty International holding placards and candles in a show of support for Kalwant.

Gathering for 30 minutes, they chanted “Singapore stop the killing” and “save, save Kalwant” while holding placards which read “stop the execution of Kalwant Singh”, “Putrajaya save Kalwant” and “Singapore don’t kill again”.

Malaysian Nagaenthran K Dharmalingam was sent to the gallows in Singapore on April 27 for trafficking heroin.