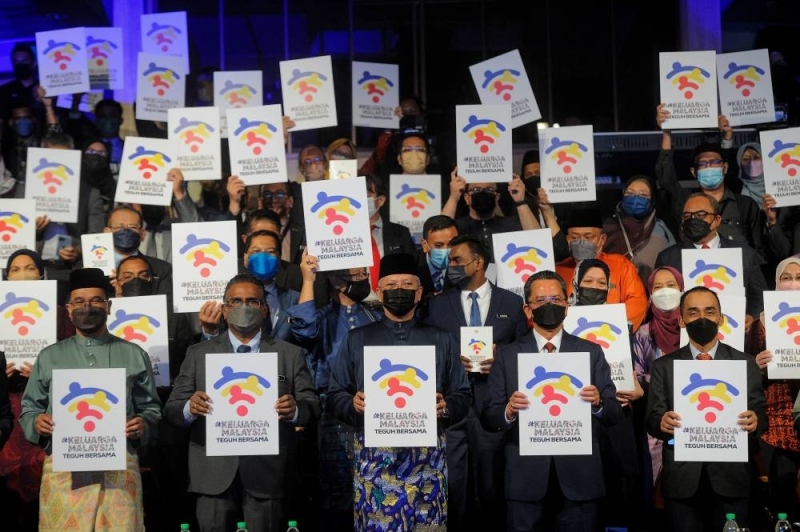 KUALA LUMPUR, July 1 — Communications and Multimedia Minister Tan Sri Annuar Musa has officially launched the logo and theme for this year’s National Day celebration. For 2022, the theme is Teguh Bersama which translates to staying firm together, and the logo selected to represent the occasion is the WiFi symbol.

According to the presentation, the National Day logo is based on the concept of internet coverage to represent the development of communications infrastructure and digitalisation for the convenience of the people. It consists of three bands coloured in blue, yellow and red which represents Keluarga Malaysia consisting of different races and backgrounds living in harmony.

The alternating red dots on each band is said to represent the openness to celebrate diversity and differences for the sake of mutual progress. Meanwhile, the red dot at the bottom stands for identity and the patriotic spirit which forms a foundation for a sovereign and visionary nation.

National Day which is also known as Merdeka Day locally is celebrated on 31st August and this year marks the 65th year of independence from British rule in 1957. Another important date is the 16th September for Malaysia Day, to celebrate the formation of Malaysia which consists of Malaya, Sabah, Sarawak and Singapore in 1963. Singapore left the federation in 1965 to become an independent island republic.

Connectivity has been a contentious point in Malaysia especially with the delay of mass 5G adoption.While Malaysia currently ranks #2 for fastest 5G download speeds by Opensignal, it lags behind other Asean countries when it comes to coverage and service availability.

At the moment, YTL Communications’ Yes 5G remains the only telco to offer 5G services in the country. The other major players such as Celcom, Digi, Maxis and U Mobile have been holding back from signing commercial 5G wholesale agreements due to pricing and transparency concerns. Unlike other countries, Malaysia has decided to roll out 5G through a state-owned single wholesale network called Digital Nasional Berhad.

Yesterday, Annuar Musa revealed that the sale of 70 per cent of DNB to six telcos is expected to be finalised by 8th July 2022. He told reporters that everything is going according to plan after negotiations, and they have reached a certain understanding. According to an earlier report by The Straits Times, DNB will be offering discounted rates for 5G wholesale services until 80 per cent coverage is achieved and there will be a price review that will be overseen by the Malaysian Communications and Multimedia Commission (MCMC) every three years.

The last Jendela report states that Malaysia currently has 95.5 per cent 4G population coverage with average mobile download speeds above 40Mbps. More than 7 million premises in Malaysia have been passed by fibre while 798 Orang Asli villages were provided with high-speed broadband access.

Although Jendela has been some notable improvements, there are still complaints from users, especially from rural areas. Annuar Musa has ordered the MCMC to conduct their own audit and mapping to ensure that the telcos deliver its services according to expectations. Last week, the MCMC has reprimanded Celcom, Digi and U Mobile for not meeting mandatory standards for quality of service. — SoyaCincau