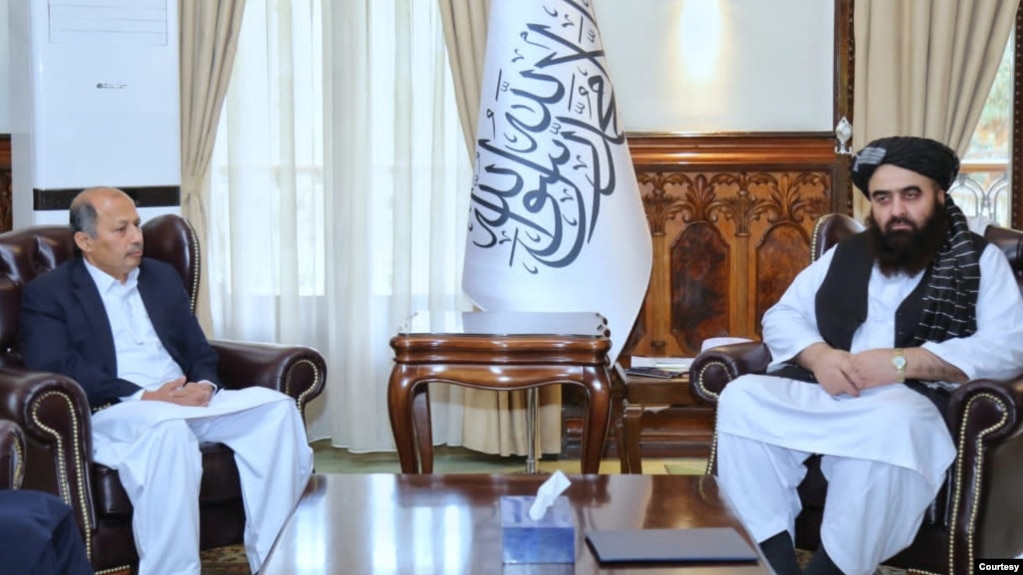 Local Taliban officials confirmed to VOA on condition of anonymity that Pakistani jets on Saturday bombed several villages in the border province of Khost, killing “at least 30 civilians, including women and children.”

The claims could not be immediately verified by independent sources. Hundreds of residents in Khost were in the streets Saturday to protest the deadly airstrikes, chanting “Death to Pakistan.”

A provincial government spokesman, Mawlawi Najibullah, told VOA the shelling killed at least six residents in the Shultan District. He did not confirm reports of Pakistani airstrikes taking place in Kunar.

Officials said the military actions prompted Taliban Foreign Minister Amir Khan Muttaqi to summon the Pakistani ambassador in Kabul, Mansoor Ahmad Khan, to his office Saturday and give a “strong démarche” or official protest note to him.

“The Afghan side condemned the recent attacks on Khost and Kunar provinces, stressing prevention of such acts,” Muttaqi’s office said in a statement.

It quoted the foreign minister as warning the military violations by Pakistan would deteriorate bilateral ties and allow “antagonists to misuse the situation leading to undesired consequences.”

The statement did not mention, however, whether the raids had caused any casualties.

“IEA calls on the Pakistani side not to test the patience of Afghans on such issues and not repeat the same mistake again, otherwise it will have bad consequences,” Mujahid warned. He used the official name for the Taliban government, the Islamic Emirate of Afghanistan (IEA).

Officials in Islamabad have not commented on the allegations that their forces were behind Saturday’s attacks.

The United Nations Assistance Mission in Afghanistan (UNAMA) said it was working to establish facts on the ground and verify the extent of losses.

“UNAMA is deeply concerned by reports of civilian casualties, including women and children … Civilians are never a target,” the mission tweeted.

The border regions of Afghanistan are known for harboring fugitive leaders and fighters of the banned Pakistani Taliban militant outfit, known by its acronym, TTP, waging deadly terrorist attacks in Pakistan.

Islamabad says the TTP, which is designated as a global terrorist organization by the United States and the United Nations, is plotting terrorism against the country from its Afghan sanctuaries.

Pakistani officials have acknowledged a recent spike in TTP attacks, particularly in northwestern districts on the Afghan border, which reportedly have killed and wounded dozens of soldiers.

The Pakistan government has repeatedly urged the Taliban rulers to rein in TTP activities since the Taliban seized control of Afghanistan last August, days before U.S.-led foreign troops withdrew from the country after 20 years.

It is widely known that the TTP provided recruits and sheltered Afghan Taliban commanders on the Pakistani side of the porous border between the two countries to launch insurgent attacks against the then-Western-backed government in Kabul and international troops inside Afghanistan.

In recent years, the Pakistani military undertook major offensives against TTP bases in Waziristan and adjoining districts, forcing thousands of militants to flee into Afghanistan. The crackdown had significantly reduced terrorism in Pakistan, but the return of the Taliban to power in Kabul eight months ago has resulted in a dramatic spike in TTP-led militant violence.