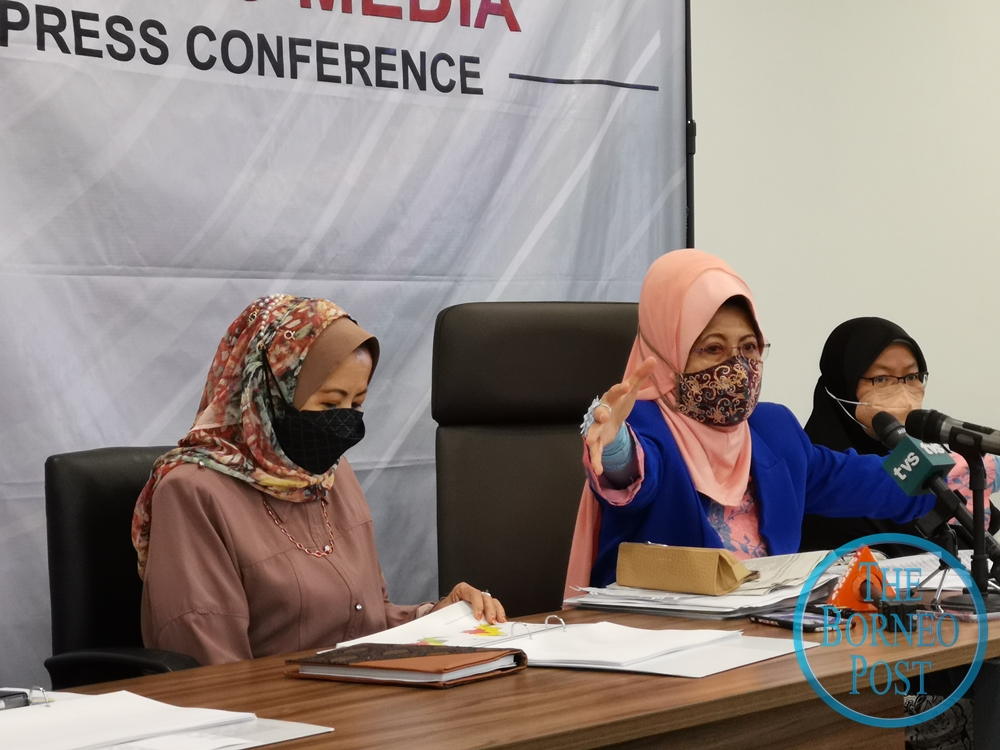 Fatimah gesturing as she stresses a point during the press conference.

The Women, Childhood and Community Wellbeing Development Minister said such decrease is the highest since 2014 while the state recorded 2,099 teenage pregnancy cases in 2020.

“Sarawak saw a decrease of 22.6 per cent or 476 teenage pregnancy cases last year, compared to the figure in 2020. Since the setting up of the One Stop Teenage Pregnancy Committee (OSTPC), one of our objectives is to see a yearly reduction of 10 per cent in the number of cases.

“We are happy to see the drop and hope this trend will continue,” she told a press conference after chairing the state-level OSTPC meeting at her office at Bangunan Baitulmakmur 2 in Petra Jaya here today.

Up to last month, she said Sarawak had reported a total of 323 teenage pregnancy cases.

Fatimah pointed out that 63 per cent or 1,023 cases out of the total cases reported last year did not register for marriage.

She said 70 per cent of last year’s total cases involved dropouts, meaning, their pregnancy happened after they stopped schooling.

“Now that we are at the endemic stage with a lot of physical programmes being allowed to be held. We will get permission from the Ministry of Education to do intervention programmes in schools.

She added that the agencies included the Social Development Council, Ministry of Health, Sarawak Welfare Department as well as non-governmental organisations (NGOs) such as Sarawak Women for Women Society (SWWS).

Fatimah said a total of 24 Sarawak Social Development Randau Programmes will be organised statewide this year.

She said they will heighten the community awareness of teenage pregnancy to not just reduce the cases but also avoid seeing baby-dumping cases.

“If there is a need, pregnant teenagers will be offered a support system at Taman Sri Puteri where they will be provided shelter and counselling as well as others,” she added.