Malaysia also has been reporting the second-highest Covid-19 deaths per million people in Asean since March 3, behind Brunei. 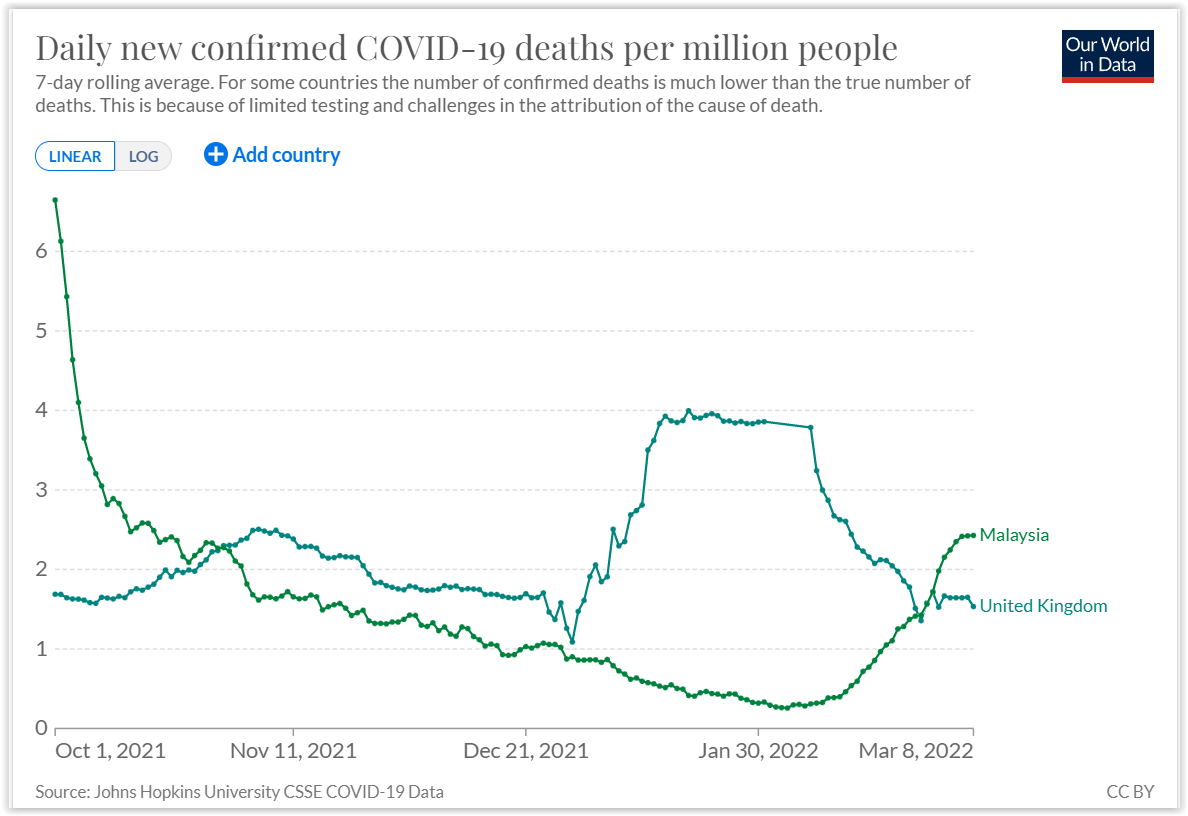 KUALA LUMPUR, March 10 – Daily new Covid-19 fatalities in Malaysia have exceeded the United Kingdom’s, relative to the population, since the start of this month.

According to global tracker Our World In Data, Malaysia reported 1.72 new Covid deaths per million people on March 1, slightly higher than the UK’s 1.71 on in rolling seven-day averages.

The UK’s Covid-19 mortality trend has been declining for more than a month since its peak this year on January 18 with four deaths per million people, while Malaysia’s trajectory has been rising since February 4 with 0.26 fatalities per million population.

Our World In Data notes that the death figures on a given date do not necessarily show the number of new deaths on that day, but fatalities reported on that day. Hence, Our World In Data uses a seven-day rolling average of daily figures to even out reporting variations.

The UK’s Covid-19 mortality rate was consistently higher than Malaysia per capita from October 30 to February 28, except for February 27 when Malaysia reported 1.43 Covid-19 deaths per million population to the UK’s 1.35.

When looking at absolute figures, based on a rolling seven-day average, the UK only reported about 105 coronavirus-related deaths on March 8 compared to 80 fatalities reported in Malaysia.

According to the New York Times’ global Covid-19 vaccination tracker, Malaysia’s vaccine coverage is 16th highest in the world at 81 per cent of its population fully vaccinated, behind Asean countries Brunei (93 per cent), Singapore (86 per cent), and Cambodia (84 per cent).

Malaysia’s booster coverage is the 30th highest globally at 47 per cent of its population having received an additional vaccine dose, behind Singapore (64 per cent) and Cambodia (51 per cent).

Yesterday, Health Minister Khairy Jamaluddin maintained that Malaysia’s Covid-19 epidemic is under control, saying health care capacity is still adequate despite surging infections as the country prepares to reopen borders and relax domestic Covid restrictions on April 1. He also said only 12 per cent of people who died from Covid-19 had received a booster vaccine.

The health minister noted that the vast majority of Covid-19 victims aged above 80, with a case fatality rate (CFR) of seven per cent compared to the current 0.2 per cent rate in the general population, had comorbidities at 91 per cent.

A significant portion of the Malaysian population suffers from chronic diseases. Veteran physician Dr Milton Lum, citing the National Health and Morbidity Survey 2019, noted that 20 per cent, 30 per cent, and 40 per cent of Malaysian adults have diabetes, hypertension and high cholesterol respectively.

An estimated 1.7 million and 3.4 million people have three and two of these risk factors respectively. He noted that Covid-19 has a worse impact on senior citizens and people with comorbidities.