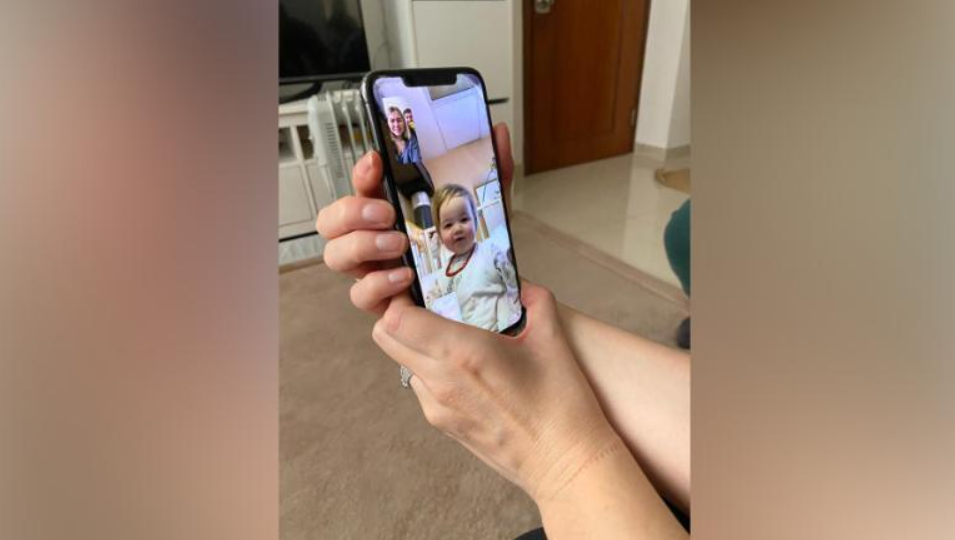 Hong Kong (CNN)Fighting back tears, Laura and Nick struggle to comfort their sobbing 11-month-old daughter, Ava, through a phone screen.

“Bubba, we love you…we’re going to come and get you darling. We will,” Laura says, in a video of a phone call with their child the parents shared with CNN.
They’re in the same city, but Laura and Nick aren’t allowed to visit Ava at Hong Kong’s Queen Mary Hospital, where the infant is recovering from Covid-19 after testing positive on Monday. They’ve asked CNN not to publish their full names for privacy reasons.
Hong Kong’s strict rules ban contact between Covid-19 patients and their immediate families who do not test positive, even the youngest patients like Ava.
The city’s not in full lockdown, but authorities are tightening measures to combat its fifth and most serious wave of Covid-19, including rolling out mandatory mass testing of its more than 7 million residents. 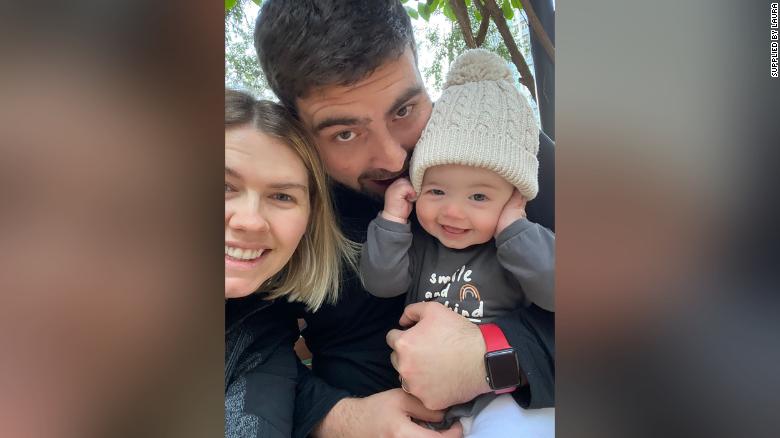 Laura, Nick and Ava.
The mandatory testing drive has led to widespread fears throughout the city that, as more positive cases are identified, more families could be separated — with children placed in isolation.
Enter your email to sign up for CNN’s “Meanwhile in China” Newsletter.
close dialog
On the video, Laura breaks down as Ava sobs. “I can’t bear it,” she says, as her husband makes a desperate appeal to a nurse, who appears to be holding the phone.
“Nurse, just give her some comfort please,” Nick begs, as a nurse wearing a full hazmat suit appears on the screen, her face covered with a shield.
Under Hong Kong policy, Ava can only be discharged if she tests negative seven days after her admission. Laura and Nick are planning to take a Covid test; they say they hope it will be positive, so they have a chance of being reunited with their daughter in a government-run quarantine camp.
“We’re just helpless. We are really helpless,” Laura told CNN. “This is not in the best interest of her that she’s without us. She needs us and we need her.”

For almost two years, Hong Kong relied on a combination of stringent quarantines and track-and-trace efforts to isolate positive cases, keeping the city comparatively virus-free.
But those measures no longer appear sufficient in the face of thelatest wave, which officials have described as a “tsunami.”
Hong Kong has reported about five times more cases in the past three weeks than the entire pandemic combined. On Wednesday,the city reported a record 8,674 new cases — the vast majority the highly contagious Omicron variant.
Still, Hong Kong continues to adhere to China’s strict zero-Covid policy, and in an effort to combat the surging fifth wave — predicted to peak in the next three weeks — the city’s leader, Carrie Lam, on Tuesday announced its toughest restrictions yet. 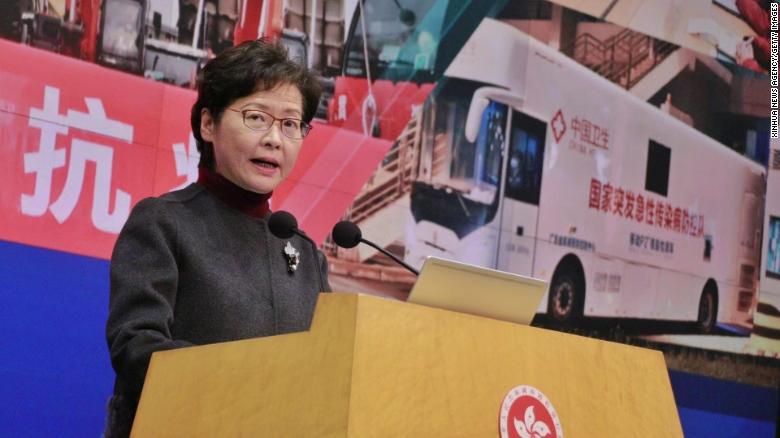 Hong Kong leader Carrie Lam speaks during a press conference on February 22, 2022.
All Hong Kong residents — about 7.4 million people — will have to undergo three rounds of compulsory Covid-19 testing in March, Lam said during a news conference. In between those tests, residents will have to take daily rapid antigen tests, Lam added.
Public and international schools — which are already conducting online classes — will break early for the summer to freetheirpremises for use as temporary isolation, testing and vaccination facilities. An existing ban on in-person dining past 6 p.m., the closure of gyms and entertainment venues, and flight bans from nine countries, willbe extended until at least April 20.
In a bid to keep Hong Kong strictly in line with its zero-Covid strategy, China announced last week that it will send health experts and medical supplies to Hong Kong and help build new quarantine and isolation facilities.
“With central government’s support and the Hong Kong people’s unity, we will certainly triumph over this pandemic. After the storm we will see a rainbow again,” Lam said Tuesday. 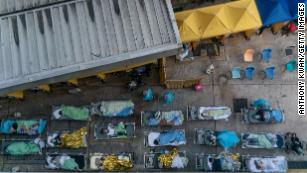 Hong Kong is sticking to zero-Covid, no matter what the cost
But even Beijing’s help might not be enough.
Modeling by experts at the University of Hong Kong (HKU) predicts the number of confirmed casesto peak at around 183,000 a day in early to mid-March.
Dr. Edwin Tsui, the controller of the Centre for Health Protection, said mass testing is likely to confirm a large number of positive cases the city would then have to manage.
He said the city’s health system may need to “handle thousands or tens of thousands of cases…in a very short period of time.” 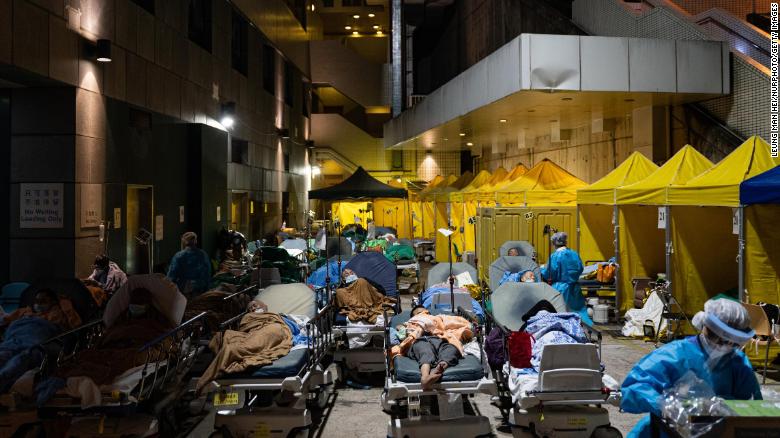 Covid patients wait for medical treatment at a temporary shelter in Hong Kong on February 16, 2022.

Laura and Nick are not the first Hong Kong parents to be separated from their children. During an outbreak last year, reports emerged of children being sent to hospital, even if they were asymptomatic.
Ava’s worried parents took her to hospital on Monday after she came down with a fever and had difficulty breathing. When Ava’s Covid test came back positive, her parents were told to leave, Laura said.
The family’s story was posted on a popular Facebook group and has since spread, prompting panicked discussions between Hong Kong parents about what could happen if their children test positive and they test negative, like Laura and Nick. 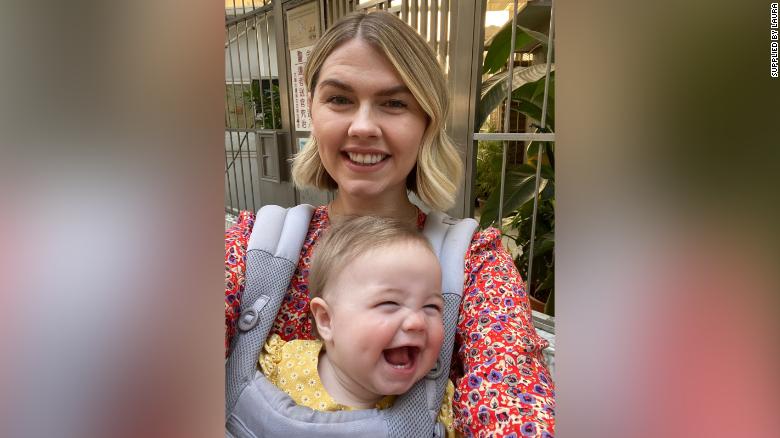 Laura with her daughter, Ava.
CNN reached out to Lam’s office about the family’s case but has not received a response. When asked about separating children from theirparents in April last year, Lam reiterated that Hong Kong was a “compassionate government.”
“We have been applying this exceptional treatment…instead of sending the very young kids on their own to a quarantine center…we will exceptionally accept the admission of the children into the hospital as well,” Lam said.
But as cases soar and Hong Kong insists on sending most positive cases to hospital or government-run quarantine facilities, officials’ stance on family separation seems less clear.
The chief manager of Hong Kong’s Hospital Authority, Dr. Lau Ka-hin, said Tuesday officials would “try our best” to treat parents and children who have tested positive in the same hospital.
Ava’s father, Nick, said they were living “a real-life nightmare.”
“If she’s in stable condition, why can’t we just take her home?” he said.
Laura added; “We’re not asking for a spare bed at the hospital. I would stand next to her bed. I will sit on a chair next to her for the remaining five days. I just I need to be with her.” 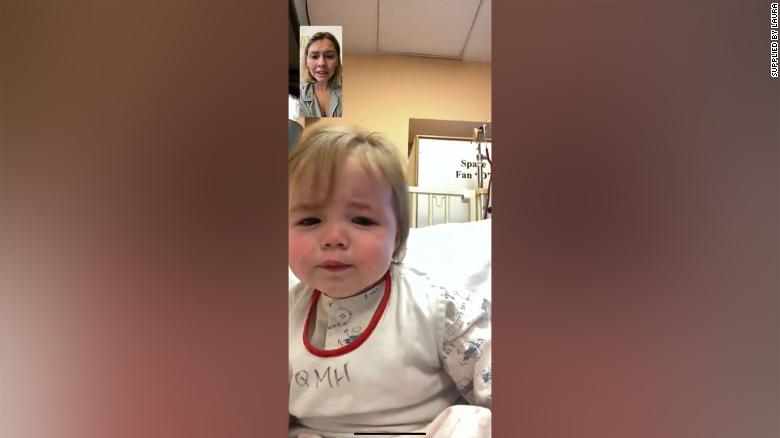 Laura comforts Ava over a video call.
A Hospital Authority spokesperson told CNN that as they had not tested positive it was “not advisable” for Ava’s parents to stay in the hospital’s isolation facilities.
If in due course they are confirmed as having Covid-19, “the hospital will try to facilitate and arrange them to stay in the same ward if situation allows,” the spokesperson said.
The spokesperson added that when Ava was in respiratory distress, her parents were not allowed to visit as she was receiving one-on-one care in the intensive care unit.
“The hospital understands the stress of the parents for not being able to accompany their child, therefore (a) video call would be arranged up to three times a day,” the spokesperson said.
According to Odile Thiang, a clinical adviser for mental health NGO Mind HK, family separation “is incredibly taxing for both the parents and the child.”
“In both cases, there’s experiences of anxiety, depression, and of course, PTSD (post traumatic stress disorder),” Thiang said. “And these impacts are felt long after the actual traumatic event.”
For Laura, this is more than just her own family’s ordeal.
“The worry is that you have to make an agonizing choice whether to take your child to get the medical care that they need or to keep them at home so you’re not separated,” she said.
“And that is the situation that so many parents are going to find themselves in Hong Kong. That is going to have a devastating impact. And no parents should have to make that choice.”
Source: https://edition.cnn.com/2022/02/23/asia/hong-kong-family-separated-covid-intl-hnk/index.html