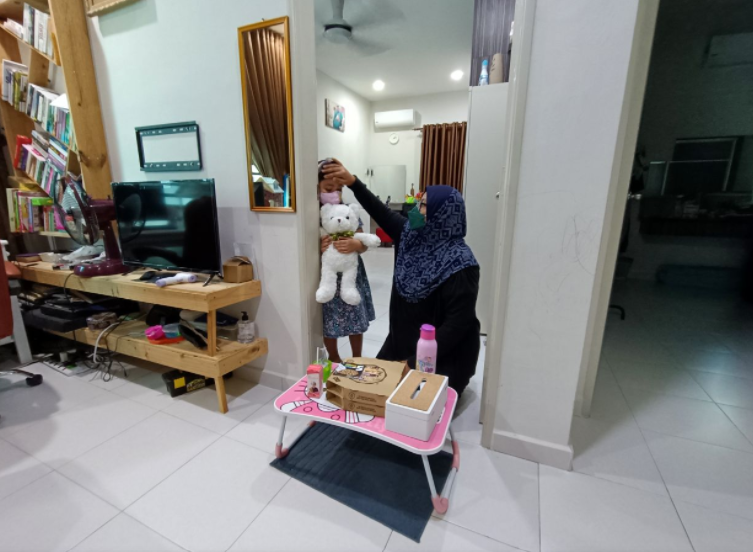 PETALING JAYA: Imagine having to explain to an eight-year-old boy that he has to be “home alone” in his room for seven days.

Civil servant Azizah Ahmad, 32, said she kept her son in a separate room after he tested positive for Covid-19 when he returned home from school.

“He always asked me to hug me, but since we cannot do that, I told him to get well first,” she said, adding that her son felt sad as he had to be alone in his room.

His diagnosis came after he developed a fever and a sore throat.

Azizah said that her son was vaccinated a week before his Covid-19 infection.

“We left food outside the room and he collected it himself.

“After he used the toilet, we sanitised it as well to prevent the virus from spreading,” she added.

Her situation is becoming more familiar among Malaysian families as more children are found to be Covid-19 positive.

This means that parents have to find ways to cope with their sick children.

The Health Ministry’s statistics showed that about 50,000 children below the age of 12 had been infected since last month.

A mother in her 40s, who only wanted to be known as Chong, said her husband and her four children aged two, six, 11 and 13 all tested positive for the virus.

Her children, she said, were “lethargic and tired”.

“They had low energy and a lack of appetite and were mostly resting or sleeping,” she said.

Chong noted that her two-year-old son also had trouble sleeping through the night due to his persistent fever.

“We had to be alert to regularly check on him. It was difficult administering the liquid paracetamol because he would spit it out. We gave him the suppository when it was required,” she said.

After her two younger kids recovered, her two oldest then developed a slight fever, sore throat and cough.

However, she said these symptoms only lasted for a day or two as they recovered by the third day.

“Based on our observation, our younger kids’ innate immunity is very capable of fighting off the virus which builds their natural immunity. They recovered quickly even though our three younger kids have yet to be vaccinated,” she said.

Chong and her husband have received their booster dose while her eldest child has been fully vaccinated.

IT manager Nick Lim, 41, said his youngest child, who is two years old, constantly cried and needed to be held most of the time.

“I did not isolate myself because my baby is too small and cries when she is not held. So I have to comfort her,” he said, adding that his eldest child, seven, was also not as energetic as before and was fatigued most of the time.

“She was obedient and listened to what I wanted her to do. I made sure I gave her a lot of water too to ensure that she was constantly hydrated,” he said.

He said the only medication he gave his family was paracetamol to ease their fever.