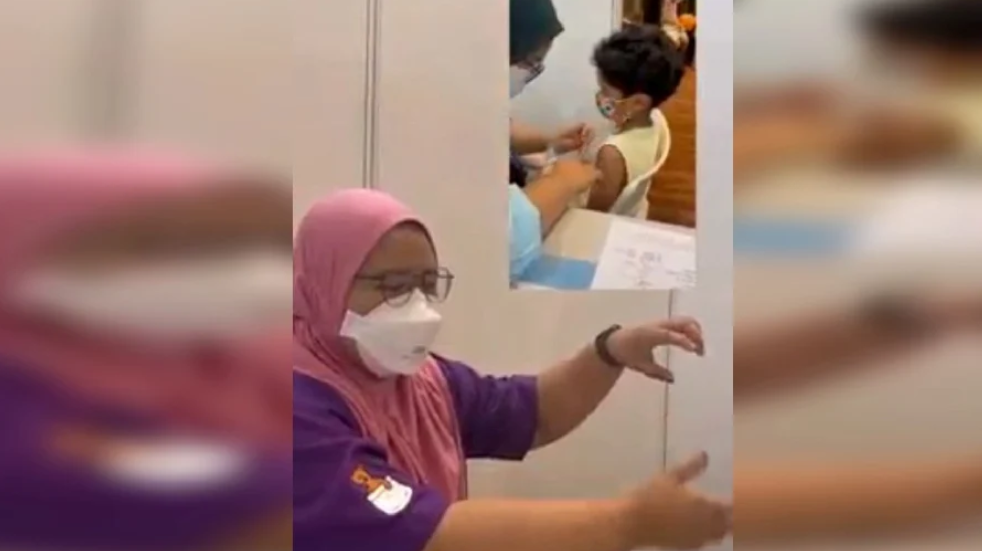 In a social media posting that accompanied the clip, it urged irresponsible quarters to stop making baseless accusations against such healthcare workers.

It said the ministry was carrying out its responsibilities to protect the people from suffering severe symptoms associated to Covid-19.

“Demi Allah (I swear to God), I did not empty the vaccines (from the syringe) that were supposed to be administered on the children,” she said in the four-minute video.

At the beginning of the clip, the nurse said she carried out the procedures involved before administering the Pfizer’s Covid-19 vaccine.

This included showing the vial containing the vaccine and the volume of vaccine to be used to the parents who accompany children at the vaccination centre.

Under the Covid-19 National Immunisation Programme for Children (PICKids) for children aged between five and 11, 0.2ml of the vaccine will be administered to a vaccine recipient.

“Since we are dealing with children, we have to interact and distract them since we know they will become afraid after seeing the needle (of the syringe).

“I had to also stand near the child to ensure that they are sitting still before administering the injection,” she said.

To do this, the nurse said her dominant hand which is holding the syringe containing the vaccine was lower to prevent the children from panicking upon seeing the needle.

In recounting the moment when Khairy’s son was inoculated, she said she had asked the boy to count from one to 10 before proceeding to do the injection into his right upper arm.

After the needle pierce has been inserted into the skin, the nurse said that she had to slightly draw back the plunger to see if any blood returns to the syringe.

This is to ensure that the needle is in the muscle and not in the blood vessel, she said.

After noticing that there were signs of bloods returning to the syringe, she proceeded to inject the vaccine.

“You can google it. This are the steps taken during IM (intramuscular) injection,” she said.

The nurse hoped detractors do not simply jump the gun and make accusations before investigating the matter.

“During each procedure, I will try my best to ensure that the child has a comfortable experience. Please stop (accusations) and do not simply make accusation against others,” she said.

“Even though, there are those who spread slander that my son was administered with an empty syringe, more parents are confident with the vaccine,” he said.

The comments from the nurse and minister followed criticism from netizens, who claimed that Khairy’s son was administered with an empty syringe during the boy’s inoculation.

He said the ministry would investigate a 13-second video that went viral on social media claiming otherwise.

“I can confirm today that the Health Minister’s son was vaccinated recently and not as claimed by certain quarters that went viral recently. I will meet the minister tomorrow to get a better picture of the issue.

“We will investigate the claims as well as the video,” he told a Press conference after visiting the Raja Perempuan Zainab II Hospital here today.