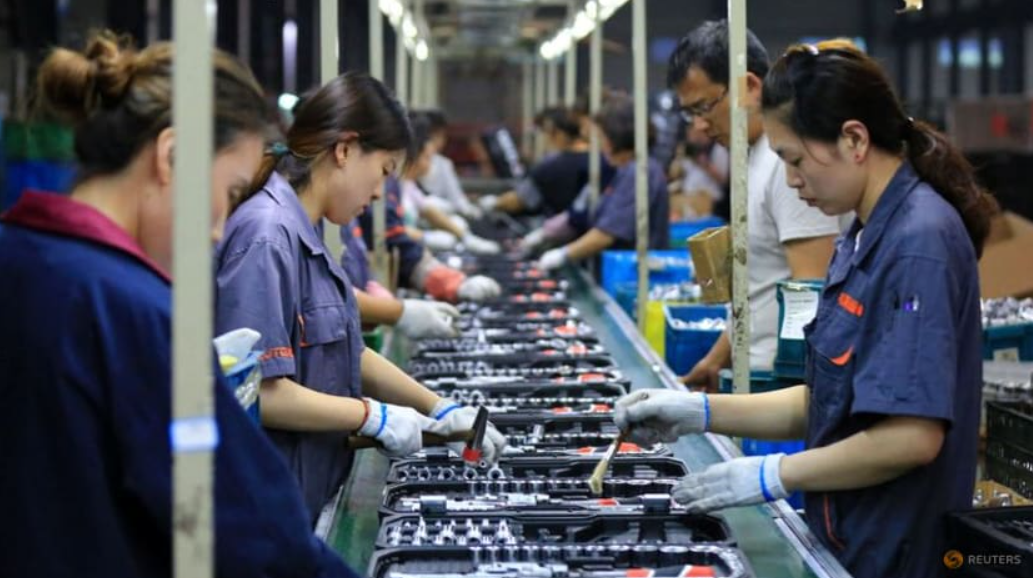 BEIJING: Growth in China’s factory activity slowed in January as a resurgence of COVID-19 cases and tough lockdowns hit production and demand, but the slight expansion offered some signs of resilience as the world’s second-largest economy enters a likely bumpy new year.

The official manufacturing Purchasing Manager’s Index (PMI) registered 50.1 in January, remaining above the 50-point mark that separates growth from contraction, but slowing from 50.3 in December, data from the National Bureau of Statistics (NBS) showed on Sunday (Jan 30).

Analysts had expected the PMI to fall to 50.

The official results contrasted with those in a private survey of mostly small manufacturers in coastal regions, which showed activity fell at the fastest rate in 23 months.

China’s economy started last year strong, reviving from a sharp pandemic-induced slump, but it started losing momentum in the summer, weighed down by debt problems in the property market and strict anti-virus measures that hit consumer confidence and spending.

Rising raw material costs and soft demand have also eroded corporate profit margins. Profits at industrial firms rose at their slowest pace in December for more than a year and a half.

With the real estate slump expected to drag on through at least the first half of this year and the emergence of more infectious COVID-19 variants, China’s central bank has started cutting interest rates and pumping more cash into the financial system to lower borrowing costs. Further modest easing steps are expected in coming weeks.

Stability will trump everything ahead of a once-in-five-years Communist Party congress this year, with policymakers looking to ward off a sharper slowdown that could undermine job creation.

But such easing carries risks, as other global central banks like the US Federal Reserve are preparing to raise interest rates, which could spur potentially destabilising capital outflows from emerging markets like China.

The International Monetary Fund on Wednesday cut its China 2022 growth forecast to 4.8 per cent, from 5.6 per cent previously, reflecting the property woes and the hit to consumption from strict COVID-19 curbs.

“Industrial activity slowed due to weak domestic demand,” said Zhang Zhiwei, chief economist at Pinpoint Asset Management. “The service sector is also affected adversely by the outbreaks in many cities.”

“The weak PMI indicates the policy easing measures from the government have not yet been passed to the real economy … We expect the government will step up policy supports in coming months, particularly through more fiscal spending.”

While China’s new COVID-19 cases have been low compared with many other countries, a surge of infections since late December in the manufacturing hub of Xi’an forced many auto and chip makers to shut operations. Production has gradually returned to normal as the city emerged from a lockdown.

Samsung Electronics last month temporarily adjusted operations at its Xi’an manufacturing facilities for NAND flash memory chips, but it said on Wednesday that production has returned to normal.

Output in Tianjin, which battled an outbreak of the highly transmissible Omicron variant, was also affected.

At the same time, the government is trying to limit industrial air pollution levels ahead of the Beijing Winter Olympics, starting on Friday. China has told steel mills in northern regions to cut production until mid-March.

China’s official composite PMI, which combined manufacturing and services, stood at 50.1 in January compared with 52.2 in December.

China’s economy grew 4.0 per cent in the fourth quarter from a year earlier, its weakest expansion in one and a half years.