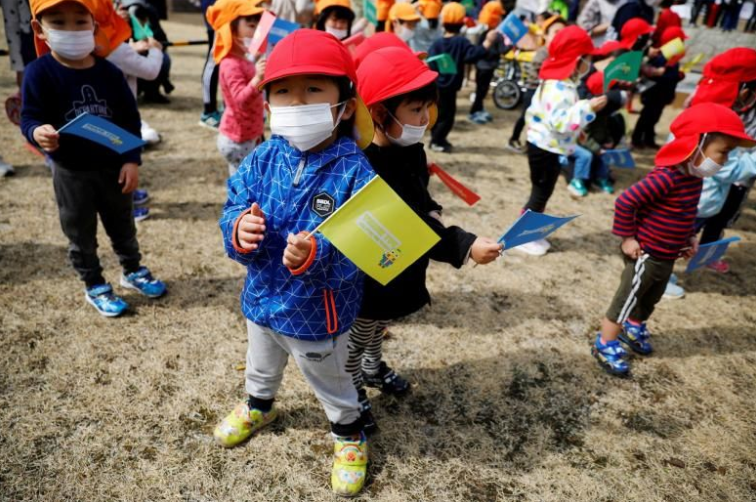 Particularly notable amid the current spread of the Omicron variant is the rapid rise in infections among children under 10 years old, and the spread among family members.

Although 90 per cent of infected children are asymptomatic or have only mild symptoms, municipalities and experts are concerned about the increased risk of serious illness if the virus spreads to elderly people.

“We’ve seen an increase in the number of child patients since around last week,” said the director of Hosaka Kodomo Clinic in Tokyo’s Bunkyo Ward.

Since the second week of this month, when the number of suspected infections began increasing sharply, the clinic has tested up to about 20 patients a day.

Of the 12 people who tested positive this month at the clinic, eight were aged under 10. Their symptoms have tended to be mild, such as a fever and runny nose.

“Up until the fifth wave of the infection, children who came in with a fever rarely tested positive in an antigen test,” the director said. “But now, there’s a good chance that an examinee will test positive.”

Infections among children aged under 10 are on the rise. About half of new patients confirmed over the week to Sunday in Tokyo were in their 20s and 30s, and those under 10 accounted for 6 per cent.

The number of patients under age 10 was 6.3 times that in the previous week, and those in their 20s and 30s numbered 3.8 times the level in the week before.

The increase in child patients has led to a proportional rise in the number of nursery school closings.

The Health, Labour and Welfare Ministry said 86 facilities in 14 prefectures were closed as at Jan 13, more than 10 times the level in the previous week.

Experts say a lack of vaccinations could be behind the rise in child infections, as well as the fact that the Omicron variant is highly contagious, making it difficult to prevent infections at home.

According to the Tokyo metropolitan government, household infections accounted for half the infections confirmed from Jan 4 to 10, more than workplace or facility infections.

Among people infected outside the home, between 31 per cent and 45 per cent of those infected with Omicron passed it to family members in the same household, according to a National Institute of Infectious Diseases (NIID) survey.

This compared with 11 per cent to 12 per cent of those infected with the variant that was dominant in 2020.

“We suspect that infections first spread among people in their 20s and 30s at Christmas and other year-end and New Year events, were transmitted to children at home, and then spread among children since the start of the new school year,” said Kansai University Professor Toshio Takatorige, who specialises in public health.

Many Omicron-infected patients are either asymptomatic or have mild symptoms.

Nine people had moderate symptoms, and one was in serious condition.

However, the older patients are, the higher the risk of serious illness.

In Okinawa Prefecture, the area where Omicron first began spreading rapidly in the nation, the percentage of Covid-19 patients aged 70 or older rose from 3.5 per cent on Jan 4 to 8.3 per cent on Tuesday.

The number of patients requiring ventilators, which had remained at zero since November last year, increased to one on Monday and three more on Tuesday, bringing the total to four.

“We’re worried about more infections occurring among the elderly, who are more likely to develop severe symptoms,” said Dr Koji Wada, a professor of public health at the International University of Health and Welfare.

“People living with grandparents are urged to take preventive measures, such as wearing masks at home, if they have symptoms.”

Source: Japan sees jump in Covid-19 cases among children under 10 amid Omicron spread | The Star