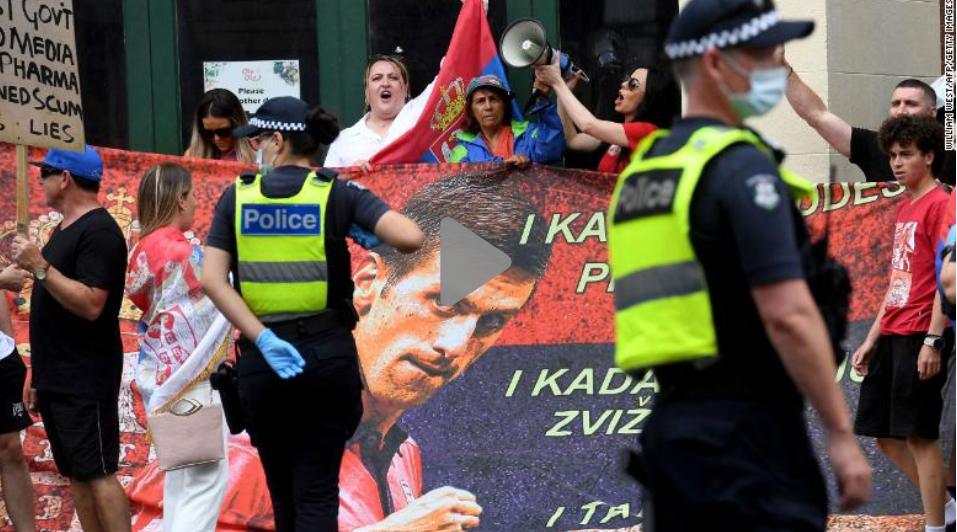 Melbourne, Australia (CNN)Novak Djokovic was granted a medical exemption to compete in the Australian Open as he had recently recovered from Covid-19, documents published on Saturday by Australia’s Federal Circuit Court show.

The development comes as the tennis World No. 1 is confined to a temporary detention facility in Melbourne as he mounts a desperate legal challenge against the cancellation of his visa ahead of the tournament.
“Mr Djokovic had received, on 30 December 2021, a letter from the Chief Medical Officer of Tennis Australia recording that he had been provided with a ‘Medical exemption from COVID vaccination’ on the grounds that he had recently recovered from COVID,” the document said.
Djokovic’s first Covid-positive PCR test was recorded on December 16, 2021, and after not showing signs of a fever or “respiratory symptoms” he later applied for a medical exemption to compete in the Australian Open, according to the court filing.
In a letter dated December 7, which was leaked to journalists Friday and cannot be independently verified by CNN, it appears tournament organizers wrongly informed unvaccinated players they could enter Australia to take part in the grand slam.
The letter advises that a confirmed Covid-19 infection in the last six months along with an accompanying letter from a doctor or public health authority would be considered as valid documentation for a medical exemption. Players were urged to submit their applications no later than December 10, the document states.
The guidance appears to contradict advice in a widely reported letter sent by Australia’s Health Minister Greg Hunt to tournament director Craig Tiley in November stressing that a Covid-19 infection in the past six months did not meet the requirements for quarantine-free entry.
Djokovic’s detention in Australia sheds light on refugee crisis 03:40
Saturday’s published court documents, which have been submitted to the court ahead of Djokovic’s hearing Monday, confirmed the 34-year-old — who has previously voiced opposition to Covid-19 vaccines and vaccines mandates — was unvaccinated when he arrived in Australia on January 5.
After being questioned by the Australian Border Force, the submission states that Djokovic’s exemption was determined to be invalid under Australia’s BioSecurity Act because his “previous infection with COVID-19 is not considered a medical contraindication for Covid-19 vaccination in Australia.”
A “medical contraindication” is granted in specific situations where a drug, procedure, vaccine, or surgery should not be used because it may be harmful to a person’s health.
Djokovic’s visa was then canceled on January 6 at 4:11 am local time, under Section 116(1)(e) of the Migration Act, which “allows for the cancellation of a visa where the holder poses a risk to the health, safety or good order of the Australian community, or to an individual within the Australian community.”
Djokovic’s lawyers argued in the submission that the nine-time Australian Open champion had every reason to believe he would be granted entry into the country as he “held a visa unqualified by any relevant condition … had received certification of a medical exemption from vaccination from the tournament organizer … and had received from the Department of Home Affairs a document informing him that he met the requirements for quarantine-free arrival.”
‘A disgrace’: See how some Australians are reacting to Djokovic visa row 01:42
The “document from the Department of Home Affairs” referenced by Djokovic’s lawyers concerns the Australian Travel Declaration (ATD) form, which must be filled in by all passengers arriving in the country at least 72 hours before departure.
According to the Australian Technical Advisory Group on Immunisation’s Expanded Guidance on temporary medical exemptions for Covid-19 vaccines, an exemption can be granted for visa holders in some cases involving a “PCR-confirmed SARS-CoV-2 infection, where vaccination can be deferred until 6 months after the infection.”
However, Prime Minister Scott Morrison told reporters Thursday that Tennis Australia was advised in a letter as far back as November 2021 that unvaccinated players with a recent Covid-19 infection would not be allowed to enter the country.
Speaking at a news conference on Thursday, Morrison said the 34-year-old “didn’t have a valid medical exemption” to avoid the vaccination requirement for arrivals into the country.
Djokovic’s legal team sought an urgent injunction against the Australian Border Forces’ decision to revoke his visa. The country’s Federal Circuit Court has adjourned the decision until Monday on whether he will be allowed to remain in Australia or be deported.

Multiple images posted by the Novak Foundation’s official social media accounts show Djokovic, who wasn’t wearing a mask, participating in a panel discussion in front of an audience.
The images are dated December 16, which is the same date Australian court documents show he tested positive for Covid-19. None of the other participants were wearing masks.
On December 17, the Belgrade Tennis Association’s Facebook page posted various photos of Djokovic posing with a group of young people at a tennis awards ceremony. One photo shows at least 26 mostly young people posing with him. Local Serbian media widely reported that Djokovic participated in the youth awards event.
On the same day, Djokovic posted a photograph of himself with a plaque on his official Instagram account.
The caption reads: “An honor to receive my very own Serbian stamp. Thank you to my generous country for this rare gift! I’m humbled!! Excited to share we’ll partner with the Serbian National Postal Service on @novakfoundation projects for every child to have the opportunity to attend preschool 🙏🏼. Gratitude for everyone that brought this together. Now @jelenadjokovicndf and I will take some stamps home for the kids to write to Santa.”
It is unclear if Djokovic was aware of his test results before appearing at any of these events. CNN has reached out to Djokovic’s representatives for comment
A number of fellow players have lent their support to Djokovic while the visa saga remains ongoing, including Australia’s Nick Kyrgios and the USA’s John Isner.
In his native Serbia, meanwhile, the Djokovic family staged a protest in front of the country’s National Assembly in Belgrade earlier this week. Djokovic’s father, Srdan, said authorities were holding his son as a “captive” — a claim Australia’s home affairs minister Karen Andrews denied.
“He is free to leave at any time that he chooses to do so, and Border Force will actually facilitate that,” Andrews told ABC on Friday.
“It is the individual traveler’s responsibility to make sure that they have in place all the necessary documentation that is needed to enter Australia.” Covid-19 vaccine boosters are ‘immoral’ and ‘unfair’, says WHO chiefAfrica