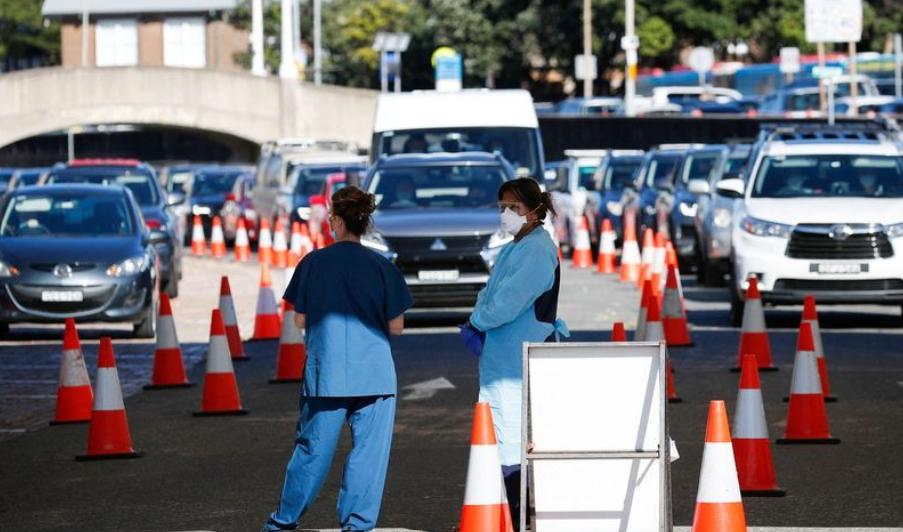 SYDNEY (Reuters) -Australian COVID-19 cases soared to a pandemic record on Tuesday as the Omicron variant ripped through most of the country, driving up hospitalisation rates as the once-formidable testing regime buckled under lengthy wait times and stock shortages.

The country which for a year and half used a system of constant testing, contact tracing and lockdowns to squash most outbreaks, clocked 47,799 new infections, up nearly a third on Monday’s number which was also a record.

Political leaders have pointed to a largely successful, if slow, vaccination rollout and few deaths, relative to new case numbers – four on Tuesday. But hospitalisations, another closely watched measure, are higher than at any other time in the pandemic: 1,344 in the most populous state New South Wales.

In Victoria, the second state, the authorities said one in four people showing up for a swab test was returning a positive result. Almost everyone in that state’s intensive care units was unvaccinated, the authorities said. Victoria had 14,020 new cases, nearly double the previous day’s count.

Other states which had spent much of the pandemic with domestic borders closed and long stretches without a new case, showed similar numbers. A month ago, Queensland reported a day with six new cases; on Tuesday it recorded 5,699.

Across the country, political leaders have been re-shaping their messaging for a population that is more than 90% vaccinated and a variant that some medical experts say is more transmissable but less virulent than previous strains.

After nearly two years of campaigning for widespread testing, the authorities want asymptomatic people to bypass government-funded clinics, where high volumes have blown out turnaround times to several days, and take their own rapid antigen tests.

But that has brought a new pressure point: an explosion in sales of home testing kits, resulting in reports of stockpiling, empty shelves and inflated prices on the few kits which have not yet been sold. Prime Minister Scott Morrison has ruled out subsidising the personal testing kits, citing a heightened role for “personal responsibility”.

“The problem at the moment is that the lack of (rapid antigen tests) is completely hampering ‘personal responsibility’ and it is a frustration that is a glaring hole in the current management of COVID,” Chris Moy, vice president of the Australian Medical Association, told ABC Radio on Tuesday, using Morrison’s phrase.

Opposition leader Anthony Albanese, who most polls suggest will defeat Morrison at an election due within months, said that “when it comes to healthcare, and rapid antigen testing, the prime minister has said that you are on your own”.

The country’s competition regulator said it would set up a team to look into complaints about allegations of price gouging https://www.reuters.com/business/healthcare-pharmaceuticals/australian-regulator-review-price-hike-covid-19-antigen-tests-2022-01-04 for the at-home rapid antigen tests.

Despite the spike in infections fuelled by Omicron, dual-dose vaccination levels of nearly 92% in people above 16 have helped Australia to keep the death rate lower than the previous virus outbreaks.

Authorities do not specify the coronavirus variant that caused the deaths, although New South Wales officials said 74% of patients in the state’s intensive care units since Dec. 16 were infected with the Delta variant.

The record spike in infections and hospitalisations comes as 2 million more Australians became eligible for their COVID-19 booster shots from Tuesday after authorities shortened the wait time between second and third shots to four months.

Just over 2.5 million Australians have so far received their booster shot, which health officials hope will keep rates of death and serious illness low.

Australia crossed half a million coronavirus cases since the pandemic began, with nearly 50% in the last two weeks. Still, its 547,160 cases and 2,270 deaths, from a population of 25 million, are lower than numbers seen in many developed countries.