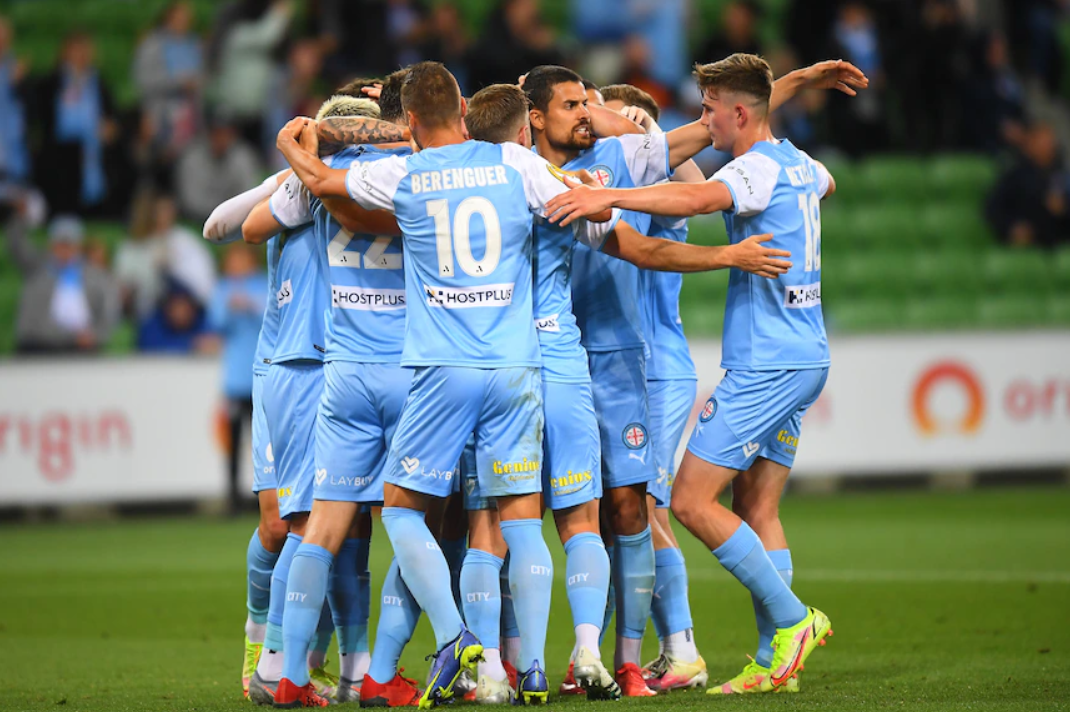 Six players from the A-League Men’s champions Melbourne City have tested positive for COVID-19, prompting the postponement of one league match and two FFA Cup games.

City’s FFA Cup quarter-final against Wellington on Wednesday night was postponed, along with their A-League Men’s away game against Brisbane Roar on December 27.

In addition, Melbourne Victory’s FFA Cup round of 16 trip to face Gold Coast Knights was postponed after Victory players were potentially exposed to COVID-19 in Saturday’s Melbourne derby against City.

“The A-Leagues can confirm that six players from Melbourne City FC’s A-League Men’s football department have tested positive for COVID-19 and are currently in isolation and all report to be currently feeling well,” the A-Leagues said in a statement.

“The case involves double-vaccinated individuals who tested positive to a PCR test on 21 December enacted after their daily rapid tests earlier in the day.

“As a result of the number of cases, the A-Leagues have determined that Melbourne City’s scheduled round six away match against Brisbane Roar has been postponed.

“The club’s primary concern is for the health and safety of all players, staff and their families. All positive cases and those close to them are adhering to relevant state government health directives.”

Wellington on Wednesday morning had announced they had no cases or players considered close or casual contacts.

Victory players and staff have all tested negative since the derby, as part of their cross-border travel requirements for their planned trip to the Gold Coast for Wednesday’s now-postponed match.

The club did not want to take the risk of their squad travelling to Queensland for the FFA Cup fixture and potentially facing Christmas in hotel quarantine.

A COVID-19 case at the Glory last week had resulted in the club’s entire travelling party being considered close contacts and thrown into hotel quarantine in Brisbane for two weeks, due to Queensland’s strict rules.

On Wednesday, the Glory confirmed their travelling party, bar the positive case, would be able to take a charter flight to Perth on Thursday and complete the remaining seven days of their quarantine period at home, after an agreement was struck with Queensland Health and WA Health.

The player who tested positive is required to remain in Brisbane to complete his 14-day isolation period in hard quarantine.

Perth are expected to return to play in January, dependent on their conditioning.

On Boxing Day, Victory are next in action against Western United, who had three COVID-19 cases of their own last week.

Meanwhile, AFLW games will go ahead, even if almost half a club’s squad are ruled out of playing because of COVID-19.

Games will continue to be played if 16 of each club’s 30 primary-listed players are available for selection, plus five train-on players.

If the minimum 21 players aren’t available, AFLW officials will seek to reschedule the game for another time in that round or later in the season.

In a worst-case scenario of a game unable to be rescheduled, the match would be cancelled.

The AFL’s general manager of competition management Laura Kane says the the protocols have been introduced to mitigate risk.

“In a national sport played across many states and territories, we need to be able to adapt, and adapt quickly, to the COVID conditions,” Kane said in a statement on Wednesday,

“These guidelines help us achieve this.

“Over the last two seasons the AFL … have planned for every possible contingency and circumstance.

“It is an approach that has successfully helped us navigate both our competitions through a really uncertain time.”

All AFLW players and staffers must be vaccinated while at least three AFLW clubs — GWS, Western Bulldogs and Richmond — have already had pre-season training interrupted after positive COVID-19 tests among their respective groups.