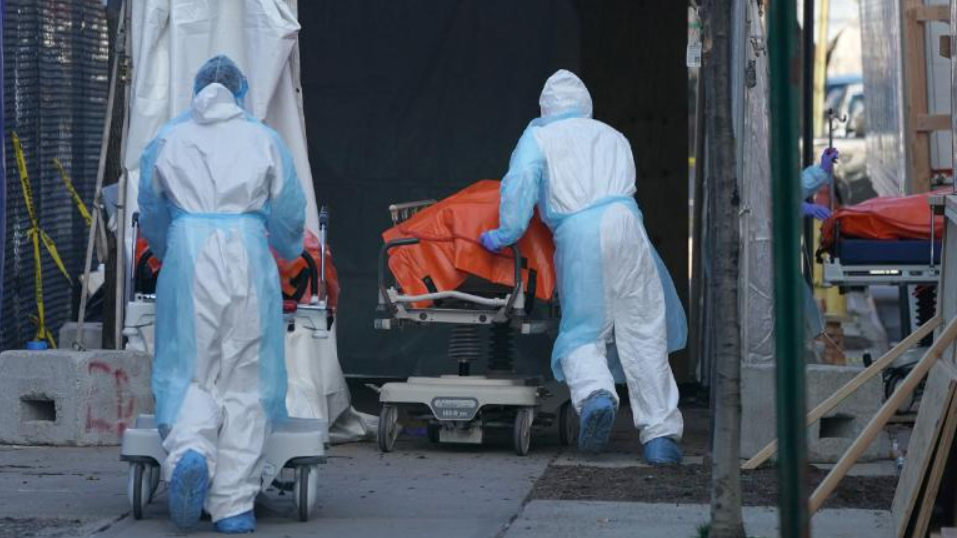 (CNN)Covid-19 claimed hundreds of thousands of lives in the United States in 2020, driving a record increase in the death rate and a drop in life expectancy of nearly two years, according to final 2020 death data from the US Centers for Disease Control and Prevention’s National Center for Health Statistics.

Life expectancy at birth fell 1.8 years in 2020, from 78.8 years in 2019 to 77 years, the largest single-year decline in more than 75 years, since World War II.
The death rate — about 835 deaths per 100,000 people — jumped nearly 17% from 2019, the sharpest increase in more than a century since the CDC has been tracking this data.
The year-over-year increase was even starker among racial and ethnic minorities, with death rates for Hispanic people going up about three times as much as for White people and death rates for Black people increasing about twice as much as for White people. The death rate for Hispanic males rose nearly 43%, and the death rate for Black males increased 28%, while the death rate for White males increased about 13% from 2019.
In 2020, death rates for Black males — 1,399 deaths per 100,000 people — were higher than any other group, while death rates for Hispanic females — 570 per 100,000 people — were the lowest.
Overall, the difference in life expectancy between men and women grew in 2020, with women expected to live nearly six years longer than men: 79.9 years, compared with 74.2 years.
Covid-19 was the third leading cause of death overall, accounting for more than 10% of all deaths in 2020. Final death data from the CDC shows that Covid-19 was the underlying cause of death for 350,831 people in 2020.
Experts say the racial and ethnic disparities in death rate increases reflect those seen in Covid-19 outcomes.
For Dr. Steven Woolf, director emeritus of Virginia Commonwealth University’s Center on Society and Health, who has published research on recent life expectancy trends, the inequity is “jolting.”
“We see it time and time again, one generation after the next,” Woolf told CNN. “As a doctor, there’s no logical reason a person should be more likely to die from a virus because of their skin color. It’s totally a product of what society has done.”
Breakouts of life expectancy data for racial and ethnic groups will be available soon, once records are more completely linked, Bob Anderson, chief mortality statistician for the CDC, told CNN. But Covid-19 disproportionately affected a much younger group of people in the Hispanic and Black population, which will have an outsized effect on life expectancy for those groups.
“Changes in mortality at a younger age have a larger impact on life expectancy. There’s so much more potential life to be lived at younger ages,” Anderson said.
Heart disease and cancer remained the top causes of death in 2020 and, together with Covid-19, accounted for about half of all deaths in the US for the year.
Other leading causes include unintentional injuries, stroke, chronic lower respiratory diseases, Alzheimer’s disease, diabetes, influenza and pneumonia, and kidney disease.
Death rates for most of these top causes were higher in 2020 than in 2019, with a nearly 15% increase in death rates for diabetes and nearly 17% for unintentional injuries, which includes drug overdose deaths.
Preliminary data published by the CDC showed that drug overdose deaths topped 100,000 annually for the first time ever during the 12-month period ending April 2021.
And while diabetes deaths have been increasing slightly over the past decade, it hasn’t been nearly as dramatic as the latest increase.
Anderson said it’s hard to know exactly what’s driving that, but it’s likely that Covid-19 played a role.
“We know people with diabetes are more susceptible to more severe disease, and some of that increase could be Covid deaths that weren’t detected,” he said. “More likely with diabetes, though, the increase is probably more from foregone care: people not seeing their doctors or getting the care they need during pandemic.”
In fact, Woolf says that a large portion of 2020’s elevated death rate was related directly or indirectly to Covid-19.
Some deaths may have been attributed to conditions that Covid-19 exacerbated, and many others were due to limited access to health care during the pandemic, he said — like those situations in which patients were fearful to call 911 during an emergency such as a heart attack or stroke, those where maintenance of chronic illnesses like diabetes lapsed or those where mental health crisis were exacerbated by stress or isolation.
“As large as that share was in 2020, (it’s) going to be larger in 2021,” Woolf said. “The share of deaths that could have been prevented in 2021 is going to be enormous.”
Death rates increased for each age group 15 years and older in 2020, according to the CDC data, and life expectancy was revised down from preliminary estimates.
But infant mortality rates reached a record low. There were about 542 deaths per 100,000 live births in 2020, down about 3% from 2019.
Source: Covid-19 was the third leading cause of death in 2020, driving a record increase in death rate and nearly two-year drop in life expectancy – CNN