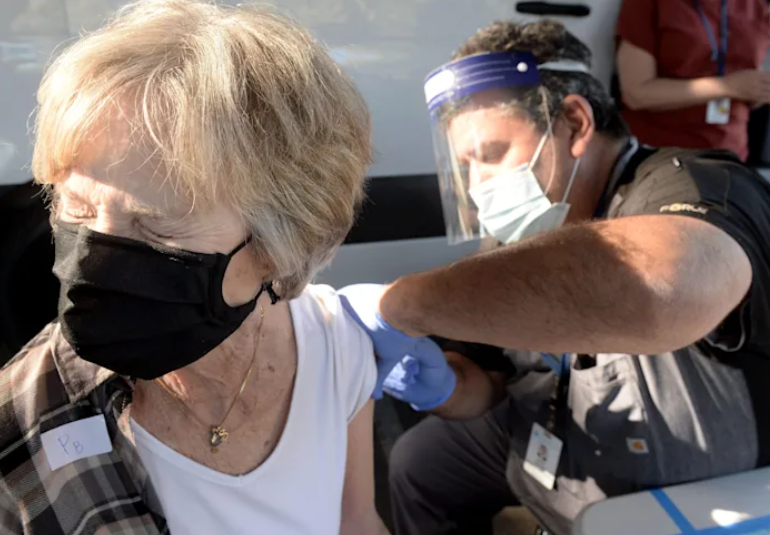 All adults vaccinated against COVID-19 should get a booster shot to help fight a winter surge expected to emerge over the next few weeks, Ventura County public health officials said Tuesday.

The booster shots had been reserved mostly for individuals at greater risk for infection or serious illness, including seniors, people with preexisting health conditions and workers in jobs that expose them to the general public. California Department of Public Health officials opened the door wider last week, telling doctors and pharmacists they shouldn’t turn down fully vaccinated adults who want boosters.

Ventura County is following the advice.

“We are recommending boosters for everyone,” Public Health Director Rigoberto Vargas said Tuesday at a board of supervisors meeting. “Right now we’re just opening it up in order for there to be further protection for everyone, especially as we head into the holidays.”

The concern over immunity levels arises partly from holiday gatherings, colder weather that pushes people indoors and infection rates driven by the still-dominant delta variant of COVID-19. Dr. Robert Levin, the county health officer, also pointed to an offshoot of the delta variant that has emerged in England and is considered at least 10% more contagious than delta though no more deadly.

“I’m concerned that through the first of the year we’re going to be faced with another possible surge,” Levin said. “I’m hoping it’s not as great as the previous one.”

Other public health experts in California have expressed similar fears but predict the surge won’t reach nearly the level it was a year ago, overwhelming hospitals, because many more people are now vaccinated.

Vargas said a slight increase in infections is likely within a month. Levin worries the surge could grow larger, noting the pandemic of nearly two years has proven COVID-19 is impossible to predict.

“This virus has not read the textbooks,” he said. “I won’t predict with any kind of comfort what this virus is capable of doing.”

The county’s COVID-19 daily infection rate of 9.8 infections per 100,000 people has been hovering at a high plateau that carries substantial risks, Vargas said. Hospitalization rates have improved but the decline has leveled off with 38 people admitted for care countywide as of Monday. At least 10 people were in the intensive care and four were on ventilators.

Vargas urged people to get their shots, saying the infection rate is five times higher for unvaccinated people compared with the vaccinated. He also encouraged holding gatherings outdoors, masking indoors and urged people who have symptoms not to attend get-togethers and to get tested.

Levin said people in high-risk categories remain the priority for boosters but said the new guidance means the shots are available for any adults who want them.

Supervisors voted 4-1 Tuesday to continue the pandemic precaution of holding their meetings online for another 30 days. Supervisor Kelly Long voted against the proposal, urging the board to allow community members to wear masks and address them in person.

“I will say that I believe democracy is extremely important and part of that is having participation,” she said.

Other supervisors cited Levin’s recommendation to prevent the possibility of COVID-19 transmission by keeping the meetings virtual, suggesting the policy be reviewed again after the holidays.

“I think we have to be very, very cautious because it is so much better to be safe than sorry,” Supervisor Carmen Ramirez said.