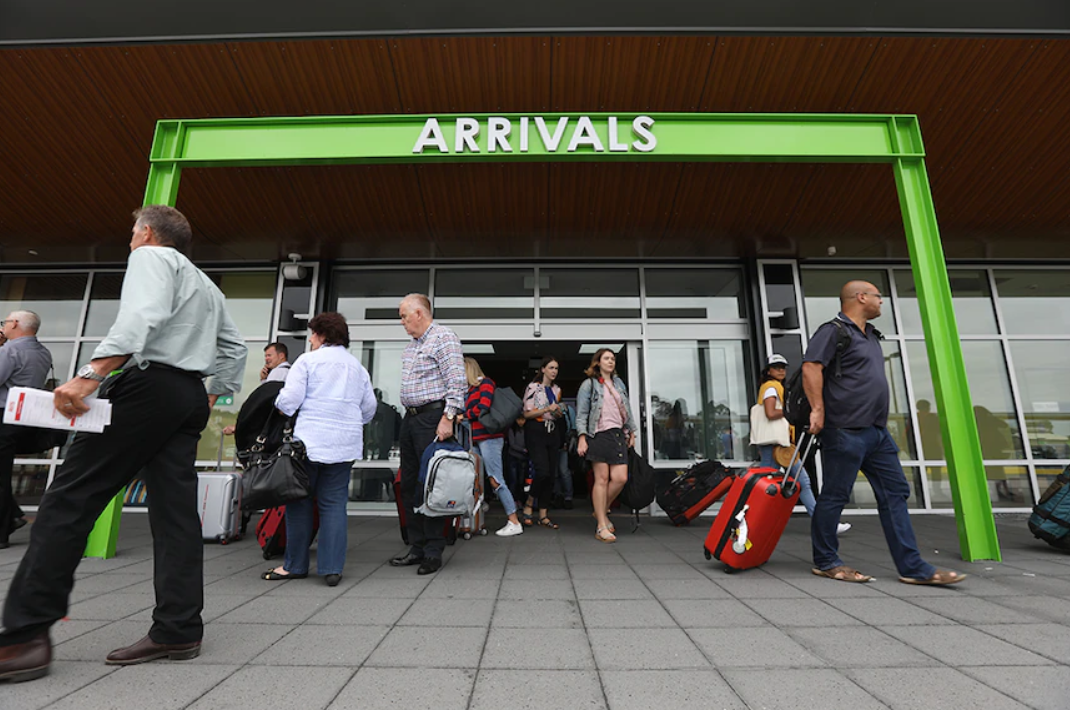 Tasmanian health authorities have identified 250 contacts of a COVID-positive man who flew into the state yesterday and was waiting for a connecting flight to Melbourne.

The Victorian man was in quarantine in Brisbane and was given permission to leave to return to Melbourne, but took a flight that went via Hobart.

While waiting at Hobart Airport, Queensland Health authorities told their Tasmanian counterparts at 2:10pm on Sunday that the man had returned a positive COVID test.

Public Health Tasmania said arrangements were immediately put in place to identify the man in the airport and isolate him.

He was then taken directly to the Fountainside quarantine facility in Hobart.

Premier Peter Gutwein said there were 100 contacts of the man from the Virgin flight and another 150 who were either airport staff or inside the terminal.

Mr Gutwein said Public Health was contacting those who needed to isolate.

The COVID-positive man was tested in Queensland but was able to leave despite not having his test result back at the time.

Mr Gutwein wants to know how that was allowed to happen.

So you want to travel this Christmas but what are the rules for each state and do I need a COVID test to go there and get back in?

“Obviously we’ll work with the Queensland government and obviously Queensland public health to understand exactly what has occurred here,” he said.

“It’s a situation obviously we would not like to see occur again and it seems a little strange that in this case that whilst he was in a quarantine hotel waiting on the result of a test he was put on a plane.”

Before travelling to Tasmania, the Victorian man was in a quarantine hotel facility.

“My understanding is he had travelled from Victoria to Queensland, was picked up at their border, was placed into a quarantine hotel, obviously had a test,” Mr Gutwein said.

“They released him, he didn’t flee quarantine, they released him to return to Victoria. Unfortunately, the flight that he chose came via Tasmania and that’s how we picked him up.

“He wasn’t looking to come to Tasmania.”

Passengers on Virgin flight VA702 from Brisbane to Hobart, which arrived around 12:15pm on Sunday, are listed as primary close contacts and being asked to isolate for 14 days effective immediately and phone the Public Health hotline.

Those who went to the male toilets in the departures lounge near gate 5 between 1:30-1:35pm and 1:55-2:05pm are primary close contacts and being asked to do the same.

People who were in the Hobart Airport terminal between 12:15-2:45pm are casual contacts.

They will have to stay in quarantine until they receive a negative test result, which must be after day five.

Public Health is in the process of contacting people on the flight and those who use the Check-In Tas app when entering the airport.

Only third positive case in state this year

Tasmania has had three positive cases of COVID-19 so far this year.

The last positive case was Tim Gunn, 31, who allegedly escaped Hobart’s Travelodge on the evening of October 11, spending almost 20 hours in the community before he was located by police in Bridgewater, in Hobart’s northern suburbs.

The case caused a snap three-day lockdown in southern Tasmania.

Mr Gunn has been charged with two counts of failing to comply with the lawful direction of an emergency management worker, two counts of knowingly providing false or misleading information, 16 counts of breaching a nationally recognised domestic violence order and one count of “possess thing used for the administration of a controlled drug”.

He has not yet pleaded to the charges and has been remanded in custody.