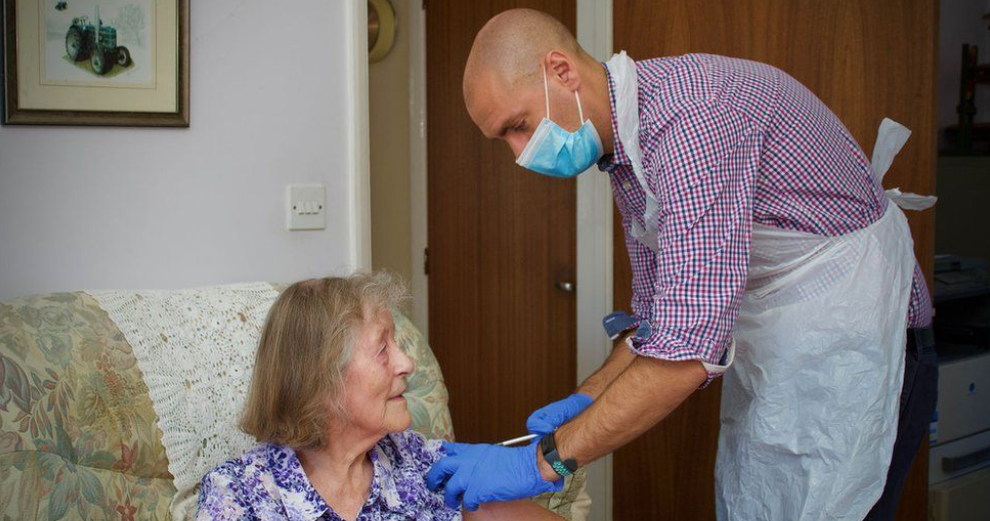 The government is calling on those eligible for their Covid booster jabs to take up the offer, saying it is key to tackling coronavirus.

Booster jabs are being offered to at-risk groups including the over-50s and frontline health and social care workers, while others call for Boris Johnson to take more restrictive measures as part of a ‘Plan B’.

The government hopes the booster programme will prevent the need for more restrictions, but what do those giving and receiving the jab think?

‘Pressure on GPs is substantial’

Dr Peter Smye works out of a GP practice in Bury St Edmunds, Suffolk, and has until 1 December to give booster vaccines to his most vulnerable housebound patients.

“It’s a challenging campaign because in contrast to the first wave of vaccinations we’ve got a whole load of backlog work coming at us, coupled with that we’ve got to do Pfizer instead of AstraZeneca,” he says.

The Pfizer vaccine requires Dr Smye to wait 15 minutes with the person after vaccinating, which is not needed with the Oxford-AstraZeneca jab.

Dr Smye says with the Pfizer vaccine he can do two patients an hour, compared with four an hour with Oxford-AstraZeneca.

He says: “At the moment as a surgery we are trying to vaccinate 100-150 housebound patients and we are about 20% of the way through that.”

The GP believes the rollout will “improve significantly once we can get people to the surgery”.

“The speed of the booster campaign is very necessary,” he says. “I do think we will get there and the pace will pick up as the population understand the need for the booster campaign and as we come in to the easier cohort, the more mobile, who can come down to the surgery.”

But there are some surgeries which are not doing the booster because they are “so overwhelmed”, he says.

“The pressure on general practice is substantial. The core workload has gone up but at the same time there are Covid vaccinations,” he adds.

Bernard Abrey, 77, has arthritis which means he can no longer walk. He and his wife Dianna had their flu jab and Covid booster at their home in Bury St Edmunds.

“I go to the farm shop, go to buy bread, go to church, so you meet people, so you need to protect them as well as myself,” she says.

The 80-year-old feels it is important to stay vaccinated, saying: “When we had both I felt protected, we could invite people in which was great.

“There’s been nothing like this before, ever, so we don’t know what the outcomes are likely to be.”

She thinks part of the reason for the slow booster jab rate is down to the rollout of vaccines to 12 to 15-year-olds.

“I think they’ve been a bit slow, but they’ve been trying to catch up with the children, so you can’t be doing both at the same time.

“They’ve got to sort that age group out because they haven’t had any,” she says.

But the Abreys had their booster six months to the day since the second jab, “so what more can you ask”, she adds.

‘The booster dose is essential’

According to the latest figures, up to the 15 October, across Bedfordshire, Luton and Milton Keynes, less than 13% of those invited have had their third jab.

Baljit Kaur Gosal, superintendent pharmacist at Smarta Healthcare in Bedford, says: “I think it’s important for people to realise we don’t take the foot off the gas.

“When the vaccine programme first rolled out there was a big demand, with back-to-back appointments, but the response for the booster programme hasn’t been as good.”

She says there has been no supply issues with the vaccine, but rather people are not taking up the offer.

“I don’t think people realise to have the booster dose is essential for that long-term protection,” she says.

The pharmacist says the booster jabs will mean “we can come back to some kind of normality of life so avoiding the situation of people working from home and the catastrophic effect on people’s mental health” experienced in lockdown.