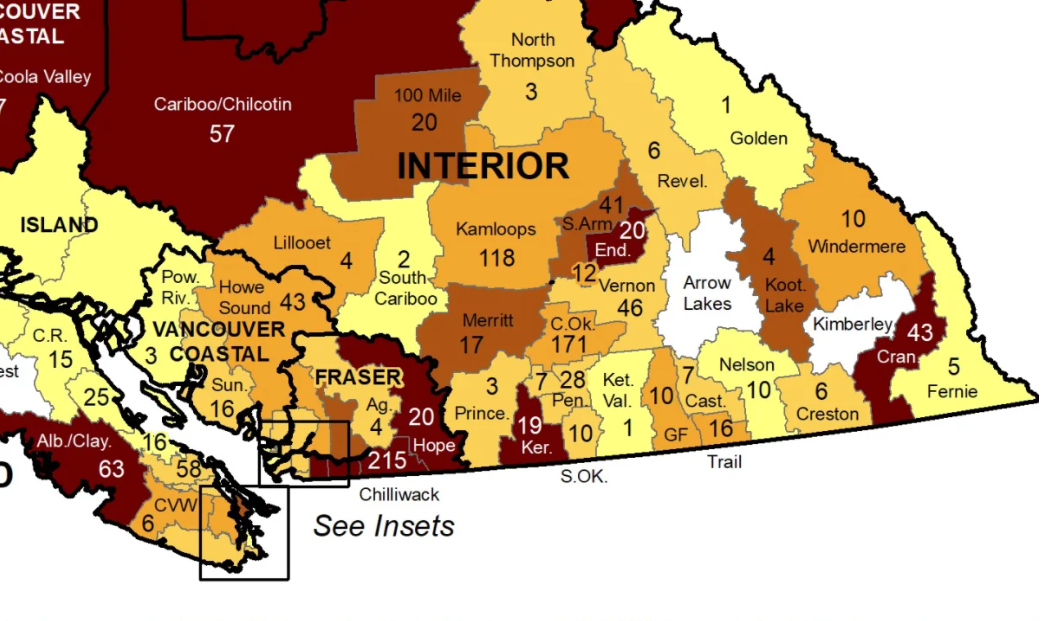 COVID-19 case numbers are continuing to fall and vaccination rates are on the rise across most of the Okanagan, according to the latest from the BC Centre for Disease Control.

The most recent figure is a 64 per cent drop from the first week of September when the greater Kelowna area had 478 cases.

COVID-19 conditions returned to calmer levels in Penticton, where 28 cases were reported from Oct. 10 to 16, compared to 63 the week earlier.

Vernon also saw improvement with only 46 cases in the most recent week of reporting. It had a 63 the week before.

And, as was the case last week, the map showed that all of the Okanagan moved out of the hot zone, as illustrated by the BCCDC local health area map, with the exception of Enderby, which still has a high proportion of cases.

The BCCDC’s vaccination report was also released Tuesday showing that Kelowna-area one-shot vaccination rates for people age 12 and up are starting to exceed the provincial average. Glenmore, for example, rose one point from last week to 91 per cent, according to data released Tuesday by the BCCDC.

The second-highest level, also up one point from last week, is Okanagan Mission at 89 per cent, while downtown Kelowna is 88 per cent, West Kelowna is 85 per cent, Rutland is 83 per cent and lake Country is at 82 per cent. The rural Central Okanagan, which is areas like Joe Rich and Peachland is at 80 per cent, which is the same as the week earlier.

The one-shot vaccination rate in Penticton is 87 per cent and 84 per cent in Vernon.

Despite weeks of improved case rates, the Central Okanagan was not included with a recent provincial announcement that capacity limits for indoor events will be lifted next week for large parts of the province.

The region’s omission has been questioned by the business community in the southern interior’s biggest urban centre, where fans of the Kelowna Rockets will still have to watch the team play in front of a half-capacity crowd.

“There needs to be an understanding by the public about why you are making the decisions, then people accept them and understand them,” Kelowna Chamber of Commerce executive director Dan Rogers said.

“Right now, people are just sitting there pondering, ‘Is a Canuck fan different than the fan of the Rockets?’”

Rogers said the business community wanted clearer communication from the province about why limits remain in place, particularly given that there has been widespread acceptance of the BC Vaccine Card, which was meant to help provide safety in indoor environments.