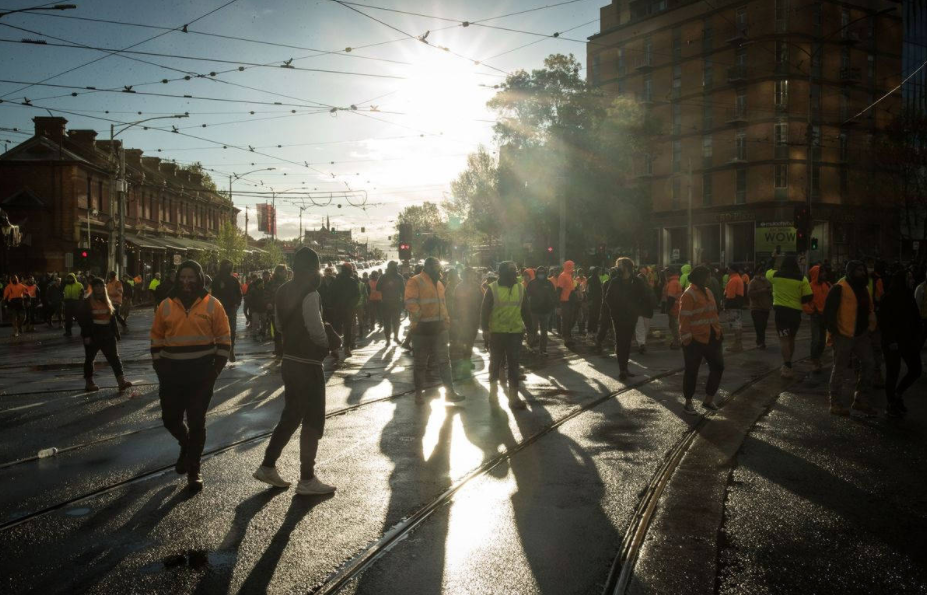 (Sept 21): Melbourne’s construction industry is shutting down for at least two weeks amid concerns that extremist groups who have infiltrated the union movement are behind violent anti-vaccination protests in Australia’s second-largest city.

“We have seen appalling behavior on site and on our streets, and now we’re acting decisively and without hesitation,” Victoria state Industrial Relations Minister Tim Pallas said in an emailed statement, announcing the closure from Tuesday. Concerns had been raised about the sector’s compliance with public health measures and directions.

Melbourne, which is in the midst of a sixth round of stay-at-home orders amid an outbreak of the delta variant of the coronavirus, saw violent anti-lockdown protests on Saturday in which young men were seen scuffling with police that led to more than 200 arrests.

Then on Monday, hundreds of construction workers protested against state government’s orders — backed by the union movement — to enforce mandatory Covid-19 vaccinations for people employed in the industry from Sept. 24. Bottles and crates were thrown at the union leaders.

In an interview on Monday, the head of Australia’s union movement said she was aware that construction unions had been targeted by “extremist groups” riled about the issue around vaccination mandates in the industry.

It “was absolutely disgusting, that attack on a union office, and that was led and orchestrated by those very same people” who protested at the weekend, Sally McManus, the secretary of the Australian Council of Trade Unions, said in a televised Australian Broadcasting Corp interview. “They want to get unions on their side with their conspiracy theories that will lead to people being sick and dying and I can tell you this: the union movement in this country will not be intimidated by them,” she added.

The Victorian government said the shutdown was due to concern about case numbers, transmission risk and reduced compliance. It added that this action would “reduce movement, minimize transmission and allow for the entire industry to appropriately adapt to the Chief Health Officer Directions, including increasing vaccination rates.”

On Tuesday, the state recorded 603 new infections — a record high for this outbreak.