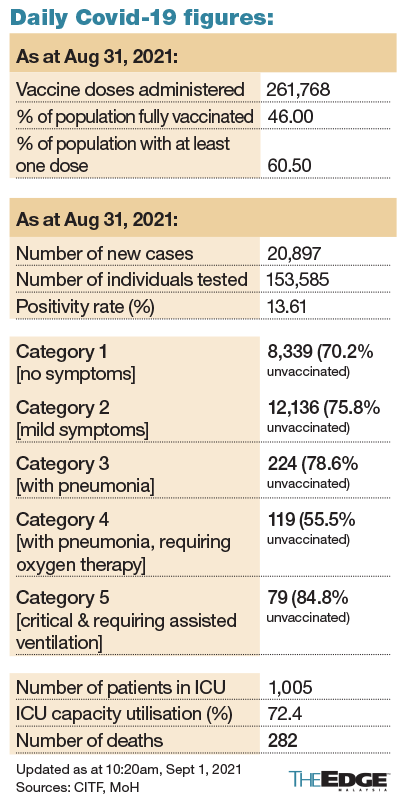 KUALA LUMPUR (Sept 1): Malaysia administered 13.6 million doses of the Covid-19 vaccine in August, compared with 12.33 million in July and 5.08 million in June.

As of yesterday (Aug 31), 15.03 million individuals at 18 years old and above were double-jabbed in the country, representing 46% of the population.

Meanwhile, 4.69 million people had received their first dose of the vaccine, while 3.75 million, who had registered for vaccination, were waiting for their first appointment.

A total of 19.74 million people had been given at least one jab over the past five months since March, representing 60.5% of the nation’s population.

Follow our Covid-19 vaccination tracker to see where we are in the race to herd immunity. In the Klang Valley, 5.7 million individuals were fully inoculated with two doses, representing 67.7% of the population of the most densely populated area in Malaysia.

Currently, 81.7% of the Klang Valley’s population or 6.88 million individuals had received at least one dose of the Covid-19 vaccine.

Meanwhile, a total of 261,768 doses were administered nationwide yesterday — the lowest daily vaccination rate in the month — compared with 361,381 the day before. Some 115,473 individuals received their first dose yesterday, while 146,295 took their second jab, according to the latest updates on Twitter today by the country’s Special Committee for Ensuring Access to Covid-19 Vaccine Supply (JKJAV), citing data from the Covid-19 Immunisation Task Force (CITF).