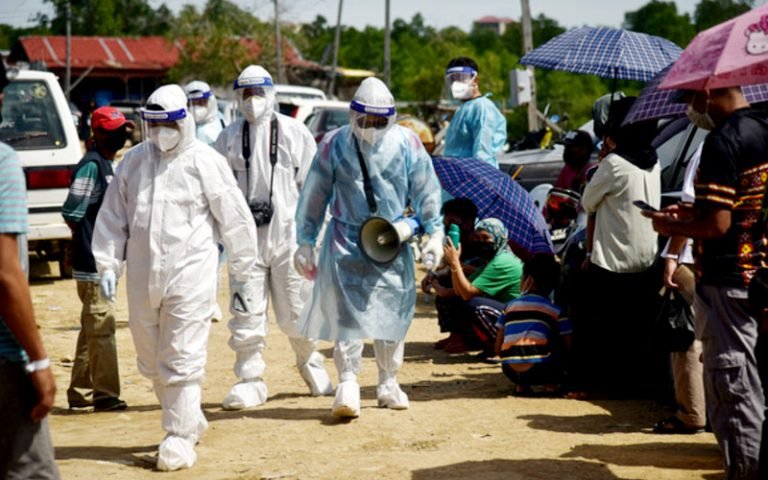 KOTA KINABALU: Things are looking better in Labuan today than a month ago, when fear and despair gripped the tiny but heavily populated federal territory.

With the vaccination rate picking up and daily Covid-19 infections going down, residents have a reason to heave a sigh of relief as they try to return to a semblance of normalcy in their lives.

Labuan resident Sherwan Salleh recalled how everything looked bleak towards the end of May when the R-naught (R0) in Labuan was the highest in the country.

“We were scared just to leave the house then, but it is improving now,” he told FMT.

“People are starting to go out and to work. Previously, you would think twice about going out because you just didn’t know if the people out there were close contacts because there were still stubborn individuals who didn’t think of others.”

The daily number of cases has gone down from three-digit figures previously to two digits this week and the government has allowed up to 60% working capacity under Phase One of the national recovery plan instead of the previously 10%.

The vaccination rate has been encouraging and the process smoother after the government flew in vaccines to the island, albeit only after the people started complaining about the delay.

Sherwan, a foreman with an oil and gas company, said he, his wife and 19-year-old daughter had already completed two doses while his eldest daughter and her husband were set to receive their vaccination soon.

“Labuan is a small island but the cases were very high,” he said. “That’s why we were pushing for the vaccine. That’s why people criticised the government any way they could, particularly through social media and the press. Only then did it send in the vaccines.

“But the reception has been tremendous. The first day they opened the walk-in PPV (vaccination centre) at Dewan Mutiara KML, I think the number of people who came exceeded the target of 2,000.

“Everyone wanted to grab the chance to be inoculated out of fear of the virus.”

Massive supplies of vaccines were then flown into the island in mid-June. Following a sudden increase in Covid-19 cases due to the spread of the more serious Delta variant, national Covid-19 immunisation programme coordinating minister Khairy Jamaluddin said the vaccination exercise in Labuan would no longer be carried out as originally planned.

He said he expected the vaccination process for 80% of the adult population in Labuan to be completed by mid-July or earlier.

“I think businesses are cautiously positive with the development because things appear to be going for the better although we’re not out of the woods yet,” he told FMT.

“The essential businesses are open. There are no more barricades and only a few roadblocks are mounted near the town area.”

Azhar, who is the Labuan BIMP-EAGA (Brunei-Indonesia-Malaysia-Philippines East Asean Growth Area) Business Council chairman, said the average number of daily vaccinations a month ago was about 750.

“However, the number of people vaccinated is confusing. From the numbers shared, it is already more than 70%, but in MySejahtera it is only recorded as 37%. This could be due to people not being registered with MySejahtera when they are vaccinated. Or maybe the system has not been updated yet.

“In any case, the numbers look promising and people are responding well. The R0 is now at 0.9, which was better than a month before, at 1.12.”

Azhar said there was a downward trend in new infections although it was still high for a small-sized island with a population of about 100,000. He said the island needed to register single-digit cases for the people to feel more comfortable.

He believes Khairy’s 80% vaccination target can be met only by mid-August at best.

“But the key to these are that the federal government has rendered assistance, residents are following SOPs, the leaders and people are distributing food to the needy, and the people’s representative council is working hard to help health authorities get people vaccinated.”

Labuan MP Rozman Isli said the vaccine supply had been consistent, adding that 55,572 people had received their first dose as of Monday. In the same period, 18,019 people have received their second jabs.

“Basically, the fear among Labuan residents is disappearing. People are calmer now, not like last time when they panicked and resorted to blaming each other,” he said.

Rozman said the authorities were nonetheless closely watching Kampung Air and the refugee community settlement scheme in Kiamsam, both of which are densely populated.

He said health authorities had conducted mass testing there and cases went up for a while before coming down again.

“But the reality has basically hit home among Labuan residents. Previously, some were not scared because they did not believe the virus could harm them. But now, people are staying home and following the SOPs because they have seen how many of their friends and family members have died.”