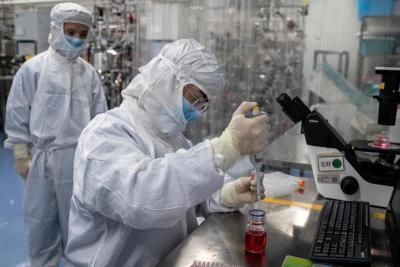 VIENTIANE (Vientiane Times/ANN): Health officials have asked everyone to redouble their efforts to take proper precautions against the spread of Covid-19 following the identification of three cases of the Delta variant of the virus, which has a much faster transmission rate than some other strains.

Out of the six new cases of Covid-19 reported in Champassak province, three people returning to Laos from Thailand tested positive for the Delta variant, the National Taskforce for Covid-19 Prevention and Control announced on Wednesday (June 30).

The Delta variant is of increasing global concern because of its rapid rate of transmission, which is thought to be at least 40 per cent faster compared to the Alpha variant.

Speaking on behalf of the taskforce, Deputy Director General of the Department of Communicable Diseases Control under the Ministry of Health, Dr Sisavath Soutthaniraxay, said the Delta variant of Covid-19 was detected in three of six imported cases in Champassak, with all of the new infections found among migrant labourers returning from Thailand.

The World Health Organization (WHO) first identified the Delta variant in India in October 2020. This strain of the virus has been held responsible for the high number of deaths recorded in many countries, including Thailand, Cambodia and the Philippines.

Dr Sisavath urged everyone to comply with measures to prevent the spread of Covid-19 and to get vaccinated as quickly as possible.

“We need to track Delta variant cases closely and carefully now that the first cases have been detected in Laos. If these people move from one place to another while carrying the virus, the risk of transmission is high, ” he said.

However, the Alpha variant of Covid-19 first identified in the United Kingdom in September 2020 is still the dominant strain in Laos and is responsible for 89.6 per cent of all infections, according to WHO.

In addition, the Beta variant was first identified in South Africa in May 2020.

The Gamma variant was first identified in Brazil in November 2020 and caused widespread infection in early 2021.

No new cases were recorded in Vientiane, while Vientiane province recorded four new locally-transmitted cases after Phonhong district was placed under lockdown earlier this week.

Some 3, 695 people have been admitted to 51 quarantine centres across the country and samples taken from them are being tested for the virus.