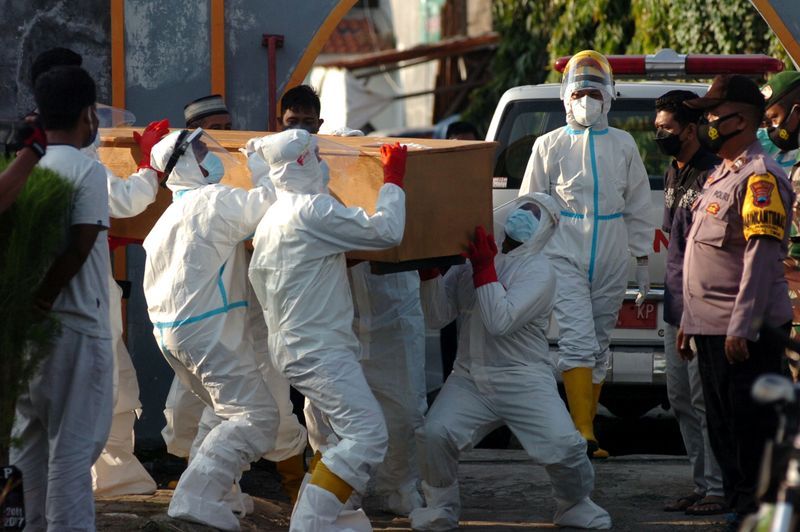 JAKARTA (Reuters) -President Joko Widodo said on Thursday that Indonesia will bring in emergency measures running until July 20 aimed at containing an exponential spike in coronavirus cases that has strained the country’s medical system.

There has been a near vertical climb in virus cases in the world’s fourth most populous nation in recent weeks, prompting health experts to warn that the outbreak could be as bad as India’s devastating second wave if tighter measures are not introduced.

“With cooperation from all of us and the grace of God, I’m certain that we can suppress COVID-19 transmission and restore people’s lives quickly,” said the president, who is usually known as Jokowi, as he announced the stricter measures.

The measures, which will start on Saturday, aim to halve the current number of daily virus cases to below 10,000, and include tighter restrictions on movement and air travel, a ban on restaurant dining and closure of non-essential offices, according to a government document.

They will be applied on the most populous island of Java and on the tourist island of Bali. Further details of the measures will be announced by Indonesia’s minister for maritime affairs and investment, Luhut Binsar Pandjaitan, later on Thursday, officials said.

Grappling with the worst outbreak in Southeast Asia, Indonesia has reported a series of record daily COVID-19 cases since mid-June, with the 21,807 new cases on Wednesday, its biggest daily increase.

Up to now, Jokowi has been reluctant to bring in measures that might hit the economy and news of the curbs wiped out gains on Indonesia’s main stock index that had earlier been up as much as 0.9%.

The highly transmissible Delta variant that caused a spike in cases in India in April and May, overwhelming healthcare facilities and swamping crematoriums, is spreading in Indonesia.

Hospitals across the crowded, main island of Java are being pushed to the brink. In Jakarta, some emergency wards have been moved to tents erected in hospital car parks to free up isolation rooms, while residents have formed queues to buy oxygen tanks for relatives being treated at home.

The bed occupancy rate in the city’s hospitals hit 93% this week, with hospitals across Java also edging toward full capacity.

‘EMERGENCY BY NAME ONLY’

But public health experts have questioned whether the proposed measures go far enough.

“The current proposals are ’emergency’ by name only, but they don’t respond to an emergency situation,” said Dr Dicky Budiman, an epidemiologist at Griffith University in Queensland.

From outside Java, others experts questioned how effective the selective emergency measures would be.

“If the government is half-hearted it will just remain the same,” said Defriman Djafri, an epidemiologist at Andalas University in Padang on Sumatra island.

What was needed, he said, was: “Two weeks total lockdown, no outside activities and no contact, people must stay at home.

Rather than implement a national lockdown, Indonesia has instead opted for localised restrictions in designated “red zones”, a move the president previously said was designed to avoid “killing” the economy.

As tougher restrictions are expected to be announced, Mercy Corps Indonesia has expressed concern over the already “dire situation”.

“Hospitals are overflowing, around one in five tests in Indonesia are reportedly coming back positive, and we’re experiencing more deaths now than at any point of the pandemic so far,” said Ade Soekadis, Mercy Corps’ country director for Indonesia.

“Worryingly, as we’ve seen in India and Nepal, we know it’s only going to get worse.”