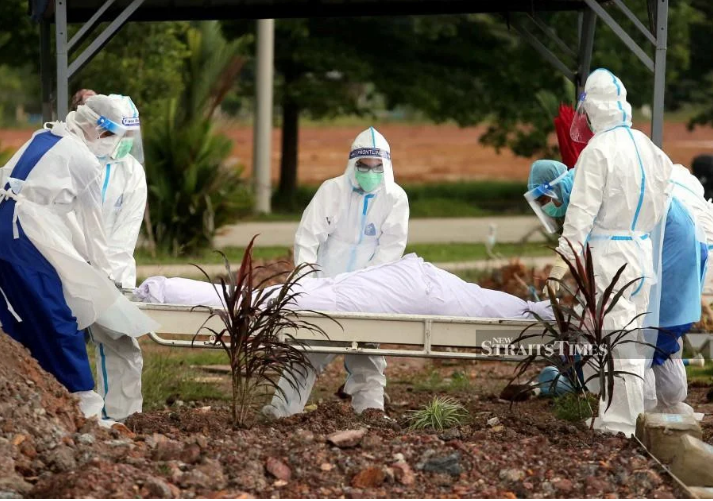 KUALA LUMPUR: Malaysia has now recorded more than 1,000 Covid-19-related fatalities in just under half a month, making June the deadliest month yet for the country since the pandemic began last year.

The 107 fatalities is the country’s third deadliest day to date. Malaysia recorded its highest single day fatalities on June 2 with 126 deaths, followed by 109 on June 5.

The 5,108 overall deaths also means that the country has now recorded more than 1,000 deaths within the span of two weeks.

He said 43 deaths were reported in Selangor, 16 in Negri Sembilan, 11 in Kuala Lumpur, seven each in Kedah and Melaka, six in Johor, four each in Sabah, Kelantan and Labuan, two each in Sarawak and Pahang, and one in Terengganu.

14 of them were brought in dead.

He said the oldest patient was a man who was brought in dead to the Sarikei Hospital in Sarawak. He had a history of high blood pressure and dyslipidemia.

The youngest patient, meanwhile, was a man who died at the Sultan Abdul Halim Hospital in Sungai Petani, Kedah. He had a history of diabetes.

Only 13 had no chronic ailments.

Dr Noor Hisham said 905 patients were currently being treated in the intensive care units, of whom 455 required ventilator support.

Selangor continued to contribute the highest number of new infections with 2,299 cases, followed by Kuala Lumpur with 1,361 and Negri Sembilan with 700.

Putrajaya and Terengganu reported double-digit tallies at 32 and 21, respectively, while Perlis had no new cases.

Malaysia also recorded 5,298 recoveries, bringing the total of individuals who have recovered to 677,751.

Meanwhile, 27 new clusters were recorded today, of which 13 were community clusters, 12 workplace-linked clusters, one high-risk group cluster, and one linked to a private educational institution registered under the Education Ministry.

These clusters have so far contributed 667 new cases.

He said Kelantan, Pahang, Selangor, Johor, and Perak contributed two community clusters each, while Sabah, Sarawak, and Putrajaya had one each.

“The Muhibbah Menggatal cluster contributed the biggest number of positive cases with 42,” he said.

He said the high-risk group cluster was unearthed in Jalan Pee Kang Hai in Johor, with 29 people testing positive.