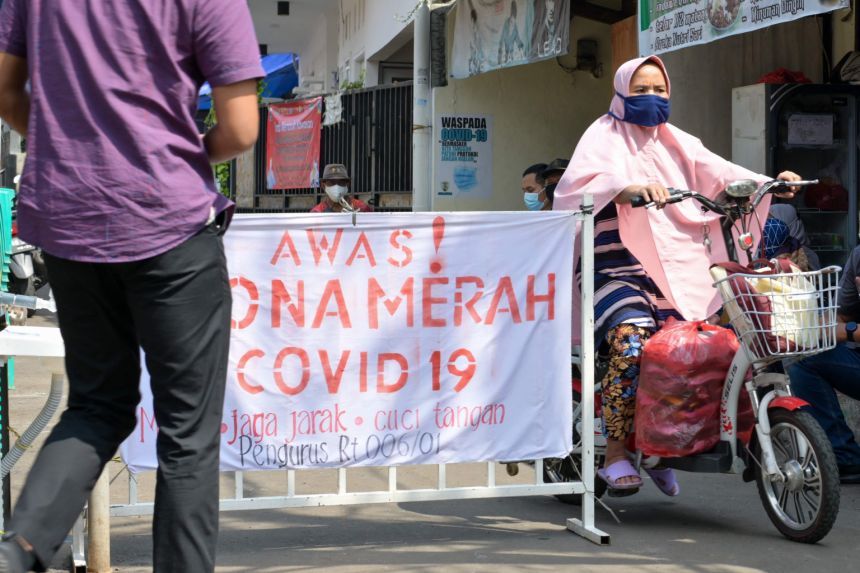 They called for a quick fix as the world’s largest archipelagic nation of 17, 500 sprawling islands saw Covid-19 cases surging past the two-million mark on Monday (June 21).

Instead of a large-scale lockdown, Indonesia has so far imposed only localised ones based on a colour-coded regime. Badly hit regions are labelled red zones and subject to tougher restrictions. Those with fewer Covid-19 cases are labelled either orange or yellow.

The country has 34 provinces that are made up of more than 500 cities and regencies.

The zoning system covers even small neighbourhoods, each having between 10 and 50 households. A neighbourhood is labelled a red zone if there are cases in at least 10 households in the past seven days. Green is for areas with no detected infection.

Cities and regencies are labelled based on factors such as hospital bed occupancy ratios (BOR), positivity rate and mortality rate.

Those with an average of above 80 per cent BOR are red zones, while those with 60 per cent to 80 per cent rate are labelled orange or yellow – depending on other parameters such as their total hospital bed capacity relative to the total suspected and confirmed cases.

A green zone is one with BOR of below 60 per cent.

But many believe the system and the “micro lockdowns” are not working well.

Dr Aman Bhakti Pulungan, chairman of Indonesian Paediatric Society, said: “We do not acknowledge those green, red zones because there are no borders.”

For example, it is not a standard measure to set up a checkpoint between regions labelled red and green that filters the number of people going in and out to contain the spread of the virus. The government does it only in certain emergency situations.

For instance, the local authorities set up a temporary checkpoint on the causeway between Madura island and the main Java island earlier this month to screen people coming from Bangkalan regency in Madura. This was after a surge in Covid-19 cases in Bangkalan, where many patients died within 48 hours of being hospitalised.

Dr Pandu Riono, from the University of Indonesia’s medical school, said another shortcoming of the colour-coded system is that no one knows how to label a region with a low testing rate.

In addition, the government has not monitored the implementation of measures or punished breaches adequately, Dr Pandu told The Straits Times.

“Whatever form of social restrictions we take, what is most important are implementation, evaluation and punishment,” he said. “We can use the ubiquitous CCTV to monitor. Next, we can take action to ensure there are penalties and incentives.”

The government encourages regions to punish residents who flout the mask-wearing rule. Those in Jakarta, for example, pay a fine of 250, 000 rupiah (S$23) or do an hour of community work such as sweeping pavements.

Experts are also concerned with the lack of whole-genome-sequencing equipment to detect new variants of the virus, and the non-disclosure of test results.

“Not every province has it… In some cases, it is equivalent to walking in the dark and blind-folded. We want to wage a war but we cannot see the enemy,” Dr Pulungan said.

Health Minister Budi Gunadi Sadikin has confirmed that based on genome sequencing tests, cases in Jakarta, Kudus in Central Java province, and Bangkalan are dominated by the Delta variant.

Dr Siti Nadia Tarmizi, a health ministry spokesman, told The Straits Times that there are 17 laboratories across Indonesia that have genome-sequencing equipment.

“We are planning to add between three and five,” she said.

Dr Pulungan also said there needs to be a system where hospitals or health departments of provinces and cities do sampling, regularly collect genome-sequencing data and share it with the public.

“This is what the WHO (World Health Organization) wants,” he added. – The Straits Times/Asia News