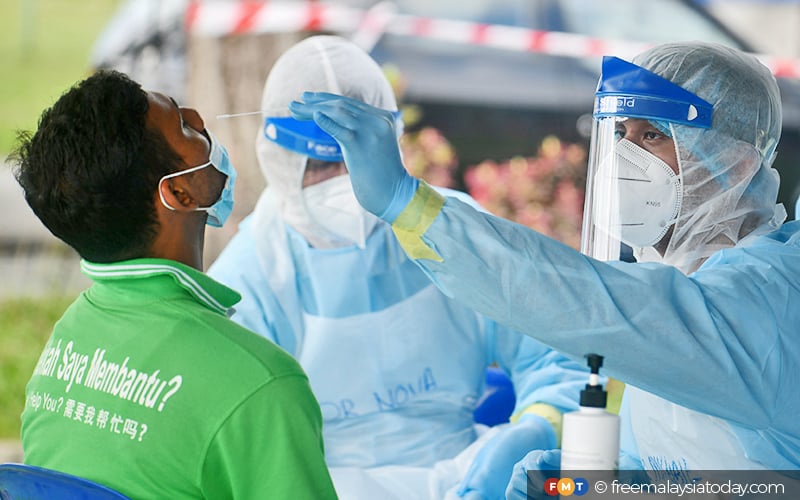 PETALING JAYA: Opposition leader Anwar Ibrahim has hit out at the government over the low number of Covid-19 tests being done, saying cases had doubled since April but daily screenings were still about the same.

Though 4,611 Covid-19 cases were reported yesterday, he said only 58,384 tests were conducted, which meant that there was a positivity rate of 7.9%.

He added that while there was a 52% drop in testing compared with May 29, when the record high of 9,020 cases were reported, the number of cases was lower by 48%.

“By way of comparison, in April 2021, Malaysia on average reported 2,107 new cases per day and conducted 58,277 tests per day. In other words, we now have more than double the cases but are conducting roughly the same amount of testing that we observed in April.

“Malaysia continues to have one of the highest rates of Covid-19 infection in the world and most cases are not tied to known clusters.

“By the World Health Organization’s (WHO) recommendation, Malaysia should be doing at least 138,000 tests and as many as 300,000 tests per day. If 138,000 tests were conducted today, we likely would have identified more than 9,000 new cases,” he said in a statement today.

The PKR president accused Perikatan Nasional (PN) leaders of incorrectly claiming that the decline in cases was due to the lockdown, when it was more likely linked to the drop in testing.

Anwar said the daily Covid-19 tests were also nowhere near the 200,000 target set by health director-general Dr Noor Hisham Abdullah in February, with the highest being 126,964 tests conducted on May 29.

“It is perplexing why testing capacity has not reached the projected target and why a government with emergency powers has to plead with the private sector to assist in this effort. This is yet another failure of the PN administration.”

Yeo said it was shocking that such facilities were not fully utilised when the pandemic was at its height in Malaysia, urging for the unused 70% capacity in private labs to be roped in to conduct mass screening.

“Most importantly, it was also reported that sporadic cases have shot up from 52% in late March to 84.3% in early June.

“The unlinked transmission is very alarming as the virus may already be spreading in the community widely without notice since most of the positive cases are asymptomatic,” she said in a statement today.

Yesterday, Noor Hisham said sporadic Covid-19 cases were still on the rise in the Klang Valley, making up 69% of the 578,105 infections reported in the past week.

He added that most of these sporadic cases did not exhibit symptoms but were still capable of infecting people around them if SOPs were not observed.

Meanwhile, Bandar Kuching MP Dr Kelvin Yii warned that the low testing rate would only be setting the nation up for a surge in new cases later when the lockdown is eased.