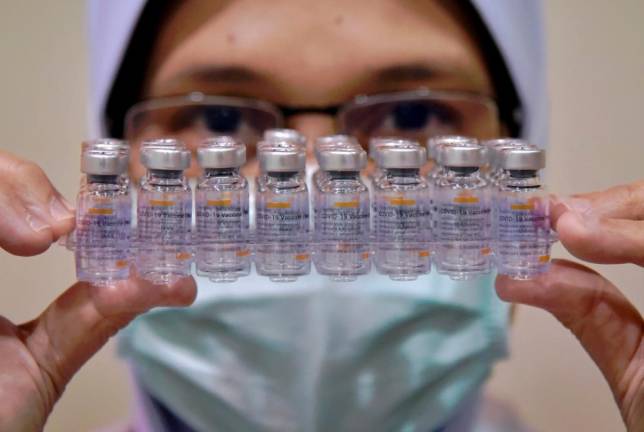 COMMON sense prevails at last with the announcement by Khairy Jamaluddin on Monday that workers in the economic sectors, beginning with the critical industries, would start getting their vaccination against the Covid-19 virus from today.

What a huge relief for the people who form the backbone of the country’s economy and livelihoods after waiting for so long for the government to get its priorities right in the National Immunisation Programme (NIP).

Phase one of the NIP is, of course, right when the thousands of frontliners from the healthcare sector were the first to get their vaccine jabs as they are directly exposed to dealing with patients who are Covid-19 positive.

Then came Phase two that began in April and this was where questions arose whether senior citizens, the disabled and those with comorbidities should get priority over those running and moving our economy, such as the thousands of workers in the manufacturing sector and the equally vital plantation industry.

In hindsight, why must senior citizens, who are mostly leading a sedentary lifestyle and who don’t actively contribute to the economy, be vaccinated earlier than the economic workers?

Phase three of the NIP was officiallly supposed to roll out last month but Khairy, the NIP coordinating minister, said the inequitable distribution of vaccines around the world hampered the process.

And the low priority given to workers in industries is reflected in them being categorised only in phase four of the pecking order.

It’s not a case of better late than never here, rather one of it being rather late.

To explain through simple logic, if factory workers had been vaccinated much earlier then there would have been no necessity for the Ministry of International Trade and Industry (Miti) to order so many industries to close during the lockdown period, or allow only the so-called essential industries to operate.

It is so doable and practical. All that Miti had to do was to request vaccination teams from the Health Ministry to go to these factories and jab their workers.

In this way, they could continue their operations without disruption as the workers would not be at risk of being infected with the virus or infecting others as well.

On Sunday itself, 11 new clusters linked to the workplace were reported.

“As such, we want to ensure vaccination for the industries will be rolled out as soon as possible to prevent more workplace clusters,” Khairy said.

And by the same token, had priority been given to vaccinating workers in the manufacturing sector, one of Malaysia’s key economic sectors, there would have been no need at all to order the so-called non-essential industries to stop their business during the movement control order period. In any case, who are we to call their business non-essential?

They, too, form the backbone of our massive network of small and medium enterprises (SMEs), a major contributor to our gross domestic product and equally importantly, one of the biggest job creators.

The products from these industries might be deemed by Miti and the people running the NIP as non-essential but to these industries, it’s a matter of survival as they too, have their supply chain obligations down the line to fulfil as well as the export market.

And what about the plantation industry?

Malaysia is the world’s second largest producer of palm oil after Indonesia and workers in this critical industry are only going to be vaccinated after those in the manufacturing sector.

Industry sources told theSun that with the prolonged MCO and plantation workers yet to be vaccinated, there is an acute shortage of oil palm fruit harvesters.

“Assuming just 10% or one million tonnes of palm oil cannot be produced due to the infection, at a current market price of RM3,800 per tonne, this means a loss of RM3.8 billion,” said an industry source.

So Khairy and his team of highly-placed colleagues should reset the priority on who should get vaccinated first, second and so on. It’s best to use common sense.