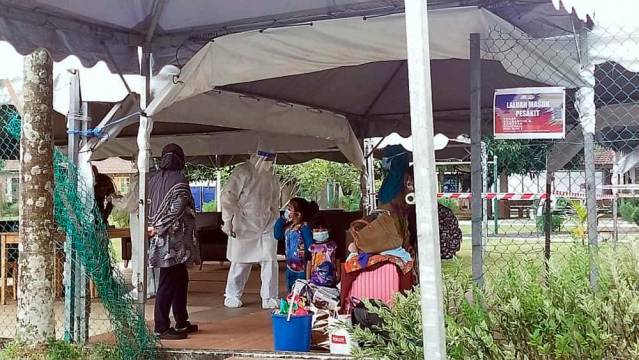 JOHOR BAHRU: The Covid-19 Quarantine and Low-Risk Treatment Centre (PKRC) at Olive B, Permai Hospital has become the first PKRC in the country to specifically accommodate women, pregnant mothers and children under the age of 12.

As of 2 pm yesterday, he said a total of eight patients had been placed at the centre.

“The Olive B block was selected based on the previous situation, as an initial and proactive step if the cases continue to rise and as an addition to the Pasir Gudang Municipal Council (MPPG) Indoor Stadium PKRC which reached a bed utilisation level of over 90 per cent on May 25.

“(However) the information I got from the MPPG Indoor Stadium PKRC, female patients who are still quarantined there will continue to be quarantined there until the date of discharge with the centre here available for new patients,“ he told reporters at Permai Hospital, here, yesterday.

According to him, the five-storey building has 40 rooms equipped with units to carry out leisure and recreational activities, breastfeeding area, rest area, prayer room while a hall on the ground floor can accommodate 60 patients.

Abdul Rahman, who is also the Johor Bahru district officer, said one of the advantages of Permai Hospital’s Olive B PKRC is that it can operate for a long period of time compared to the use of training institutes, thus reducing the capacity at MPPG Indoor Stadium PKRC

Meanwhile, he said, the committee was always ready to look at other locations to become the third public PKRC in Johor Bahru if the trend of daily infections in the state continues to increase.

“So far in Johor we have two public PKRCs involving the Pasir Gudang PKRC run by the Ministry of Health while the DB Complex PKRC in Iskandar Puteri is operated by the private sector.

“The current situation is stable but we need to be prepared to find a new public PKRC location in Johor if the increase in infection cases continues,“ he added. –Bernama