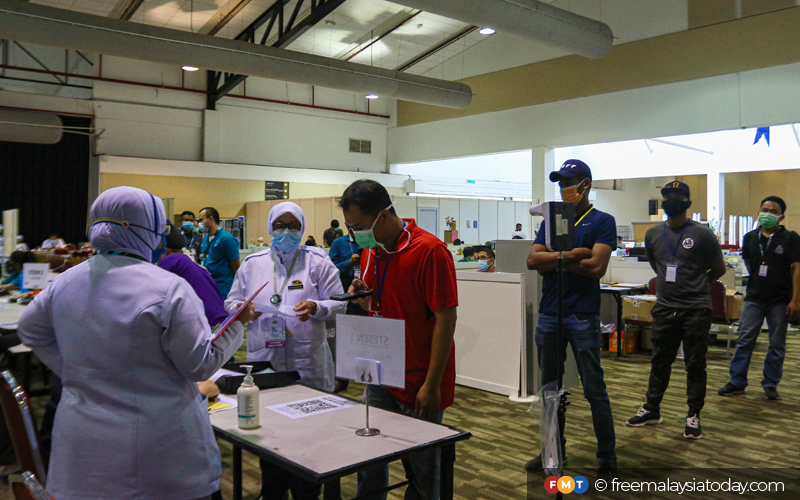 PETALING JAYA: With Covid-19 cases soaring last week, state governments and the private sector had no wish to wait for the slow federal government wagon and were in a rush to procure vaccines on their own.

But it’s easier said than done. They are not likely to get any vaccines any time soon.

Firstly, there is no guarantee that state governments or the private sector can get the supply when even the federal government is waiting for stock that it ordered a long time ago.

Even assuming that someone manages to strike a deal to get it in, preparing and submitting a dossier, getting it evaluated by the National Pharmaceutical Regulatory Agency (NPRA) and approved by the Drug Control Authority (DCA), and then placing orders may take at least seven months, said an industry source.

That is on the assumption that the NPRA/DCA expedite the approval process to 120 working days as announced earlier, from the usual one to two-year wait.

Umno vice-president Mohamed Khaled Nordin concurred. Former law minister Zaid Ibrahim went as far as saying that if the Emergency Ordinance was used, the government could suspend the powers and regulations governing the NPRA to speed up vaccine approvals.

He urged the government to grant conditional approval of vaccines which have been used widely in other countries such as Sinopharm (China), CanSino (China), Sputnik V (Russia), Covishield (India), Johnson & Johnson (US) and Moderna (US).

Can or should NPRA’s evaluation be bypassed for approving Covid-19 vaccines?

It sounds fine, but it could be dangerous. For a start, all drugs, which include vaccines, are required by law to be registered and evaluated by the NPRA, and approved by the DCA before they can be used in the country.

Governed by the Sale of Drugs Act 1952, the Control of Drugs and Cosmetics Regulations prohibits a person from manufacturing, selling, supplying, importing, possessing or administering drugs unless it is a registered product and the person holds the required licence.

Bypassing the NPRA and DCA would be tantamount to breaking the law, say industry experts.

Former pharmaceutical services programme director Dr Ramli Zainal felt that at the very best, the 120 working days for the NPRA to approve a vaccine could be shortened further if all documentation was complete.

“These documents will tell us everything about the medicine – the quality, side effects, stability and storage requirements,” he said.

For vaccines already approved in advanced countries, the NPRA does not need to do a full evaluation but only look into specific requirements such as labelling or if there was enough data on the Asian population for the country, he said.

The NPRA would do an inspection at the port to ensure that the cold chain would be maintained throughout the journey from the factory to Malaysia and that every vaccine consignment be accompanied by a lot release certificate.

Another legal requirement is the product must have a registration holder, and the company must submit all relevant documents pertaining to the vaccine and be responsible for all matters related to it.

Pharmacist and lecturer Mark Cheong said that even though the World Health Organization (WHO) had assessed certain vaccines and pre-qualified them, national regulatory agencies still needed to approve the vaccines.

“There is no such thing as rubber-stamping an FDA-approved vaccine because the manufacturer of the vaccine supplied to Malaysia may be different from the manufacturer that the FDA had evaluated,” he said.

Should the government order other Covid-19 vaccines to add to its current selection, or approve them for states and the private sector to procure to expedite vaccination?

Third World Network director Chee Yoke Ling said the government had ordered more than enough vaccines and was getting the suppliers to deliver the vaccines on time and fulfil the whole amount in the purchase agreements.

Moreover, National Covid-19 Immunisation Programme (PICK) coordinating minister Khairy Jamaluddin said that as at May 31, Sputnik V, CanSino and the Johnson & Johnson vaccines were being reviewed by the NPRA. Malaysia has approved Pfizer-BioNTech, AstraZeneca and Sinovac.

Prime Minister Muhyiddin Yassin has expressed confidence that the target of vaccinating 80% of the population was achievable by year end.

Chee also said the government cannot approve vaccines not in its list of purchases. If a company does not want to enter the Malaysian market and submit a dossier for approval for a particular vaccine, the NPRA cannot approve the vaccine unilaterally, she said.

Before that, Lee had said the federal government should approve Covid-19 vaccines that were not used under PICK for state governments or the private sector to buy from the open market.

However, after Khairy agreed that the government would facilitate the process for them, Association of Private Hospitals Malaysia (APHM) president Dr Kuljit Singh conceded that private procurement was not doable currently and the public should support PICK instead.

“Based on the scarcity of the vaccines and the processes involved in registration, there is a bleak chance of having private Covid-19 vaccines early as it’s only available around September or October,” he said on Friday.

Kuljit said private hospitals are now working with PICK to vaccinate the public.

On Monday, Penang chief minister Chow Kon Yeow had also said the state will not procure its own Covid-19 vaccines as Khairy had assured them the supply of vaccines will increase exponentially in the coming months.

It is in the interest of all parties to ensure that the programme runs smoothly and herd immunity is achieved so the people can regain some normalcy.

Massive amounts of pre-ordered vaccines for PICK are expected to arrive between now and the end of the year but not even half of the targeted 26 million population to be vaccinated have registered for the Covid-19 vaccination. That is the bigger concern.

What are state governments and the private sector doing about this to get the rest of the population to sign up? It’s time for Parliament to sit to address this question, among others.

The public’s lives and livelihoods are at stake.