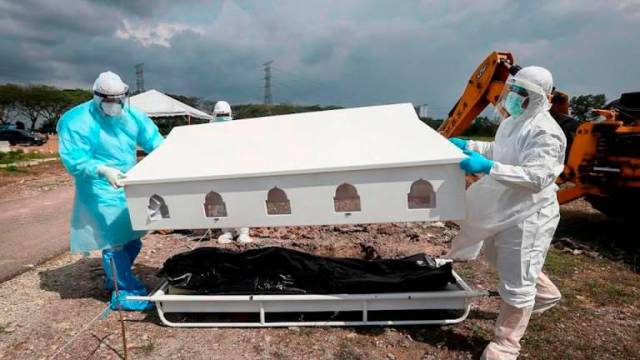 PORT DICKSON: Muhammad Haidir Rodzi still remembers his mother’s message clearly, that he should look after his four younger siblings, before being admitted to the Tuanku Ja’afar Hospital’s intensive care unit (ICU) due to Covid-19.

Muhammad Haidir, 23, said it never crossed his mind that the message via the video call was his mother’s last words to him as the eldest in the family to take over the responsibility of looking after his siblings, after both his parents succumbed to the virus, within a week of each other.

It was devastating for the siblings when their father, Rodzi Tahar, 55, breathed his last at the Tampin Hospital on May 31 and six days later, their mother Nazita Idris, 45, died at the Tuanku Ja’afar Hospital.

“We are completely heartbroken but we accept this is a will of Allah. The saddest thing was that we could not pay our last respect for our parents, to touch and kiss them for the last time but our prayers are always with them,” he said when contacted by Bernama.

Muhammad Haidir recalled that said his father had a mild fever on May 26 and decided to undergo a screening test at Port Dickson Hospital on May 29 before being confirmed positive the next day and sent to Tampin Hospital.

However, their family received devastating news when doctors informed them that their father had died at 4.30 am the next day.

“The saddest thing was when my late father did not have time to talk to us after being admitted to the hospital. My father has a history of high blood pressure, diabetes and kidney disease while my mother has high blood pressure. So they were both at risk.

“We still don’t know where the source of the infection came from or the close contact,” he said.

Muhammad Haidir said his late mother went for the screening test on May 30 after experiencing symptoms such as fever and cough and tested positive the next day.

He said the siblings also tested positive for Covid-19 and underwent quarantine at home, however did not experience severe symptoms and have now recovered from the infection.

Citing his family heartbreaking story as an example, Muhammad Haidir urged the public to always abide by the instructions issued by the government and not to underestimate the spread of the virus that can claim the lives of loved ones. –Bernama