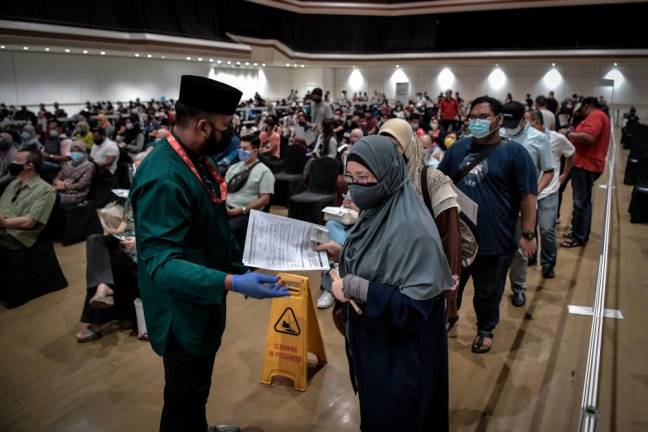 PETALING JAYA: The high rate of new infections and fatalities has become a major force in driving people to seek vaccination against Covid-19. This is evident from the quick take-up in the first round of the AstraZeneca opt-in initiative and the high volume of traffic to the registration site.

People are so desperate to stay safe that news of side effects of the vaccine, and even reports of fatalities caused by it, are no longer a cause for concern. The fact that the vaccine is still not a silver bullet for infections has had little to no impact on people’s enthusiasm for the jab.

“People have become desperate as they see the numbers (of new infections and fatalities) rising every day,” said Universiti Malaya head of social and preventive medicine Dr Victor Hoe.

He also noted that the success of countries like the United States and United Kingdom in reducing infection rates through vaccinations has also raised confidence in the vaccine.

“A combination of these factors may be the reason for the increased interest in getting vaccinated,” Hoe told theSun.

The number of new infections reported daily has been rising since the end of March, reaching a peak of 9,020 cases last Saturday. The total number of infections reached 579,462 yesterday, while fatalities has also been on an upward trajectory, bringing the death toll to 2,867.

Hoe also issued a reminder that a person can still be infected even after being vaccinated. However, those who have received the vaccine are unlikely to experience severe complications that lead to death.

“This clearly shows the importance of herd immunity. It is the same with other vaccines such as measles. A major outbreak can occur among a large group of people if many are not vaccinated.”

Hoe said the level of protection a vaccine can provide depends on several factors, such as a person’s immunity as well as the virulence of the virus and virus load the person has received.

He said those who have been vaccinated must continue to observe the standard operating procedures, including wearing face masks, practising social distancing and ensuring hand hygiene.

Universiti Malaya professor of epidemiology and public health Dr Sanjay Rampal said the knowledge that it is very difficult to avoid infection has prompted people to get vaccinated as soon as possible.

However, he warned that herd immunity against all strains of Covid remains elusive and new infections are likely to occur over the years. “On the bright side, with vaccination, the novelty of the virus will disappear and it may end up being no more than a common and less severe seasonal infection.”

He also warned that the rising rate of community transmission has raised the risk of infections, even for those who have been vaccinated. “Stay home, at least for the next four to six weeks (after vaccination).”