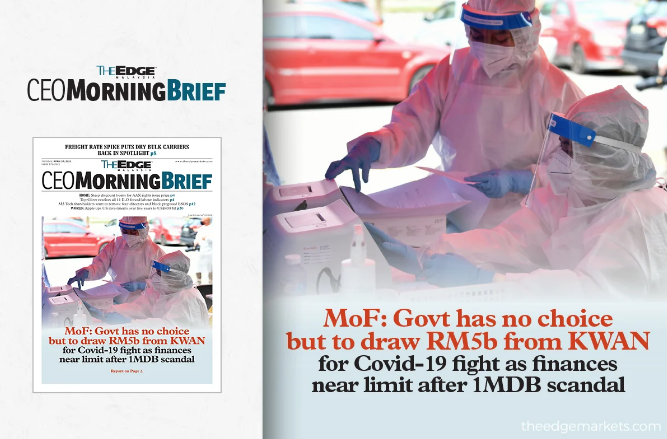 PUTRAJAYA (April 26): The Ministry of Finance (MoF) said the government will be using RM5 billion from the National Trust Fund (KWAN) for the fight against the Covid-19 pandemic, as well as for the country’s immunisation plan, as it had no choice but to do so as its finances are nearing its limit after the 1Malaysia Development Bhd (1MDB) scandal.

“The government has inherited high levels of debt, with a lower capacity to pay off commitments.

“Besides federal government debt, the government has commitments from guarantees, such as for 1MDB, SRC, GovCo and SSER, as these projects cannot generate income to finance their principal. These projects have zero multiplier on GDP and contribute zero revenue to the government,” he told a press briefing today.

The government would have been able to foot the bill for the financial needs in the current crisis if it was not for 1MDB, said the minister, adding that there is no other choice but to optimise funds such as KWAN in the fight against Covid-19.

He also said that Malaysia would likely miss its 6% budget deficit target if it does not tap into KWAN’s funds, and would likely reach 6.2% in 2021.

Of the RM5 billion of KWAN’s funds, Tengku Zafrul explained that RM3.5 billion will go towards the purchase of Covid-19 vaccines, while RM1.5 billion is earmarked for the National Covid-19 Immunisation Plan.

As at Dec 31, 2020, the fund had an asset value amounting to RM19.5 billion, comprising RM10.4 billion from Petroliam Nasional Bhd (Petronas) and RM9.1 billion in return on the investment put in by the oil and gas (O&G) major.

The minister said the RM5 billion funds will only be taken from the RM9.1 billion returns made on the investment, with the amount to be replenished later.

On the replenishment of KWAN, he did not give a clear answer but hinted that Petronas should not be the only contributor to the fund.

“Hopefully, other groups that are supposed to contribute will contribute to the fund, namely those that benefited from the country’s natural resources. I shouldn’t name them,” he said.

Asked why this amount was not included in Budget 2021, he said the government had no idea back then how much would be needed to cover expenses for the vaccines and the immunisation plan.

Furthermore, Tengku Zafrul said the government’s move to expedite the completion of the Covid-19 immunisation plan by December 2021, versus the previous February 2022, as well as the widening of the programme to ensure a stable supply of Covid-19 vaccines had resulted in higher costs.

Asked why the government did not request for higher dividends from Petronas in view of the rebound in crude oil prices, Tengku Zafrul said that is not the way as the company had to be run professionally.

“KWAN was established to ensure the optimum, stable usage of the country’s natural resources for the benefit of the nation and future generations. The fund was established in 1988, and we are the future. If we don’t tap into this fund, and the following generation does not either, what will become of the fund?” he asked.