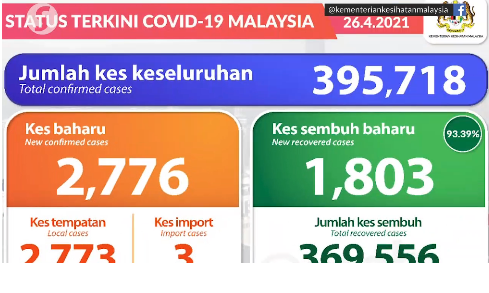 PETALING JAYA: There were 2,776 new Covid-19 cases detected in the country, including three which were imported, says Tan Sri Dr Noor Hisham Abdullah.

The Health director-general noted 762 cases were recorded in Selangor, with 557 detected from existing clusters and screening of close contacts.

He also said 17 cases were from the prison and the detention clusters involving the Kampung Selamat (16 cases) and Pagar Sri Lalang (one case) clusters.

Meanwhile 12 new clusters had been detected.

These clusters include four workplace, four community, two education, a religious and a detention centre.

Currently, 300 patients are in intensive care, with 133 requiring ventilator support.

Six fatalities were in Sarawak, followed by Selangor (three), Sabah (two), and one case each in Kelantan and Johor.