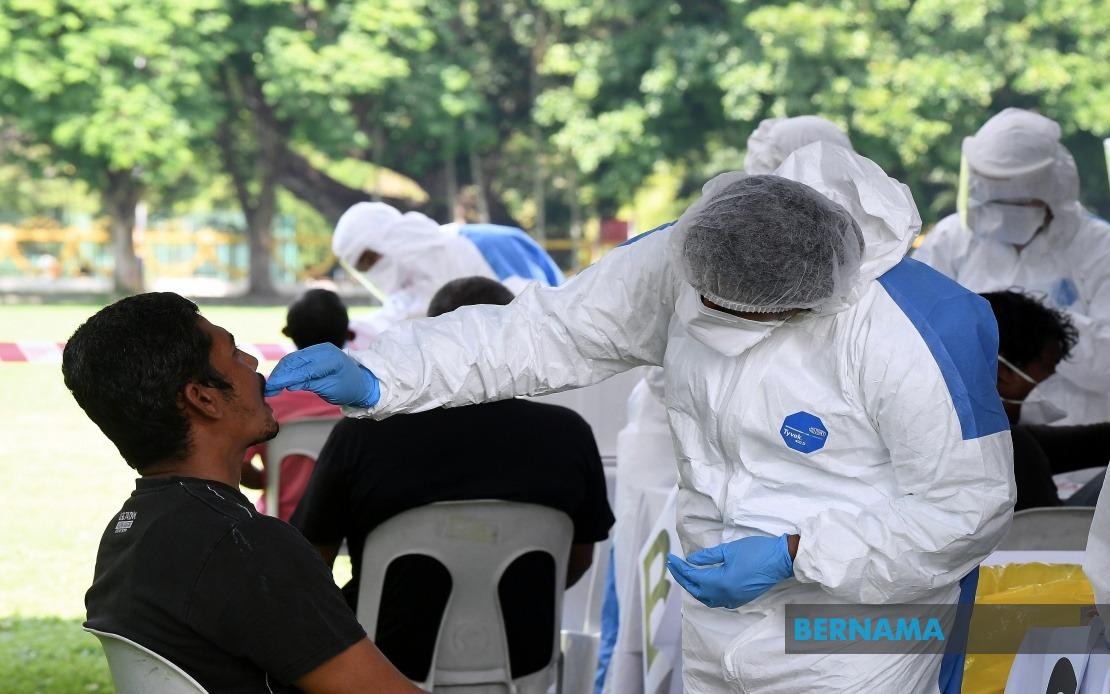 However, it said there were also four deaths where one is from Kanowit and three from Sibu, bringing the state’s total Covid-19 death tally in the state to 145.

“Seven districts recorded only one case and they are Pusa, Serian, Dalat, Saratok, Beluru, Belaga and Bau,” it said in a statement.

Sarawak’s total active cases has now increased to 25,558 cases.On the fatalities, the committee said the 142nd case involved a 72-year-old Sarawakian man who sought treatment at Kanowit Hospital after he had trouble breathing.

“He was referred to Sibu Hospital for further treatment. His health condition started to deteriorate and he passed away on April 19.

“He also had a history of comorbidity namely hypertension,” it said, adding that the victim’s Covid-19 screening using the rT-PCR test was found positive on April 20.

It said the 143rd death case involved a 73-year-old Sarawakian man who sought emergency treatment at Sibu Hospital after he had difficulty breathing.

“He also had symptoms of cough, fever, loss of taste and smell a few days prior.

“He was screened for Covid-19 using the Rapid Test Kit Antigen and rT-PCR test which returned positive on April 9.

“His health condition deteriorated and he died on April 19. The victim had a history of comorbidities namely chronic obstructive pulmonary disease and heart disease,” it said.

A 61-year-old Sarawakian man was the state’s 144th Covid-19 fatality, said the committee.

“The victim received treatment at Sibu Hospital as he was the close contact to a Covid-19 positive case among family members.

“This case was categorised as a high-risk patient due to his comorbidities that included diabetes, dyslipidemia and end-stage renal disease,” it said.

It also said that the victim was asymptomatic prior to his hospitalisation.

“However, his rT-PCR test was found positive on March 19. He passed away on April 20 after his health condition deteriorated,” it added.

It said the 145th fatality fell to an 82-year-old Sarawakian man who was also admitted to Sibu Hospital due to his close contact with a positive case among family members.

“The victim, who was also asymptomatic prior to hospitalisation, was found positive through the rT-PCR test on March 30.

“His health condition deteriorated and he died on April 20,” it said, noting that the victim had a history of comorbidities namely hypertension, gout and required assistance in his daily activities.

It added that this case is also linked to the Tanjung Genting Cluster.

On the new cases, SDMC said only 64 individuals out of the 429 cases had shown signs and symptoms of Covid-19 infection when screenings were conducted.

“There were also 374 cases detected from individuals who were instructed to be quarantined at quarantine centres,” it said.

Kuching recorded 36 cases from screenings of contacts to positive cases and nine each from the Jalan Puncak Borneo Cluster and other screenings.

Sarikei had eight cases traced from screenings of contacts to positive cases, two from other screenings and one from the Jalan Baji Cluster.

In Samarahan, two cases were from screenings of contacts to positive cases, one each from the Jalan Puncak Borneo Cluster, Taman Mesra Bako Cluster, Tarat Tani Cluster and from other screenings.

All of Matu’s cases were from other screenings while Marudi recorded three cases from the Jalan Kapitan Cluster and one from screenings of contacts to positive cases.

The sole case in Saratok and Serian were linked to the Disso Cluster and Duranda Emas Cluster respectively while Dalat had one case detected from other screenings.

All cases recorded in Bukit Mabong, Kapit, Song, Sri Aman, Beluru, Bau and Pusa were traced from screenings of contacts to positive cases.

“The total number of recoveries in the state have now increased to 19,641 or 76.85 per cent out of the overall cases,” it said.

A total of 428 new person under investigation (PUI) cases were also reported with none pending lab test result.