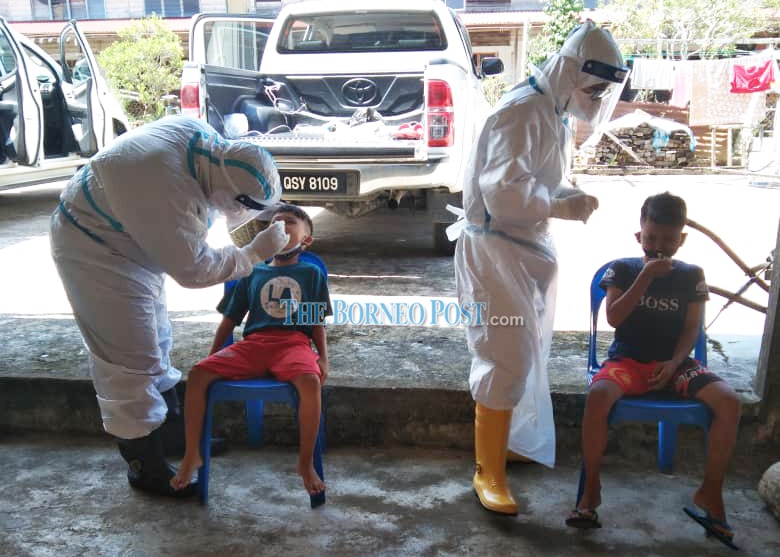 KANOWIT (April 21): It was an experience that former Covid-19 patient Rosnah Renggan would never wish upon anyone.

The 36-year-old is among the residents of Rumah Sali Kirak at Nanga Ngungun here, which is currently under 14-day Enhanced Movement Control Order (EMCO), which began last Sunday.

Yesterday, over 60 residents of the 30-door longhouse underwent their first round of Covid-19 screening, following the detection of four positive cases from a family there.

One of them was Rosnah’s son Ignatius, aged five.

“My mind went blank for a few seconds when a health worker conducted swab-test on my son.

“I only realised it when the health worker told me it was done.

“I was shaking – I was so terrified of getting infected again,” she said, adding that she was still traumatised from her past experience of being tested positive for the virus.

It was the second time that Rumah Sali was ordered to be under lockdown.

Rosnah recalled being admitted to Kanowit Hospital on Jan 30 for hypokalaemia and acute gastritis.

Her antigen RTK Antigen test, administered prior to admission, came out negative.

“On Feb 1, I underwent the rT-PCR test as a procedure for discharge from hospital.

“The result came back positive on Feb 4.

“I almost fainted upon being told the bad news. I was worried for my son and my ailing mother,” she said.

The first round of swab-tests conducted on over 60 longhouse residents on Feb 6, all turned out negative – except one that registered inconclusive result, which was re-tested later where the case, a woman in her late 60s, was confirmed positive for Covid-19.

The second swab-test exercise conducted on Feb 23 also yielded negative results; thus, the longhouse was released from lockdown on Feb 26.

Then, Rosnah was diagnosed with Level 2 Covid-19 and from the hospital, she was transferred to Covid-19 Quarantine and Low-Risk Treatment Centre (PKRC) set up at Kanowit Indoor Stadium.

She was sent home after spending 13 days at the centre.