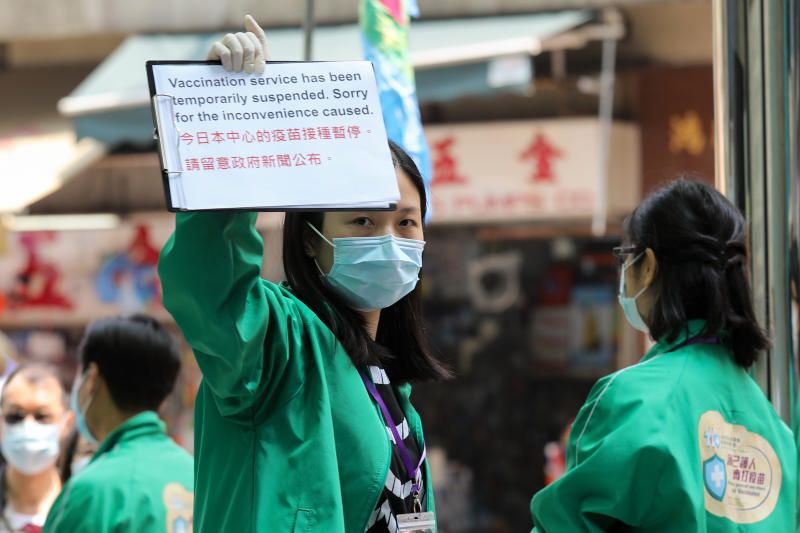 The suspension comes as the Asian financial hub has faced a sluggish take-up of vaccines due to dwindling confidence in China’s Sinovac Biotech Ltd vaccine and fears of adverse reactions.

The city began vaccinating residents with doses from Sinovac in February and began offering the one developed by Pfizer and its partner, BioNTech, in March.

The Pfizer/BioNTech vaccine has shown greater take-up since its launch with the number of residents booking that shot more than double those booking Sinovac over the past week, according to government figures.

The city government said in a statement on Tuesday that it had received notice from Fosun Industrial (Hong Kong), the distributor of the Pfizer/BioNTech vaccine in Hong Kong and Macau, that packaging defects had been found in a vaccine batch – numbered 210102 – related to the closure of bottles.

“BioNTech and Fosun Pharma have not found any reason to believe that product safety is at risk,” the government said.

It was not immediately clear how many shots would be affected but the government said use of batch 210102 would be suspended, as would that of another batch, numbered 210104, until further notice.

Fosun Pharma did not immediately respond to requests for comment.

On Wednesday, city authorities told several vaccination centres to stop using the Pfizer/BioNTech vaccine, according to notices seen by residents.

Macau said on Wednesday it was suspending the Pfizer/BioNTech vaccine after discovering a packaging flaw. In a separate incident, Hong Kong’s government said it shut a private clinic that administered Covid-19 vaccines after a doctor surnamed Lau “violated an agreement” under the city’s inoculation programme.

Broadcaster RTHK reported that Lau recommended people take the Pfizer/BioNTech shot rather than the Sinovac one due to a better international reputation for the former.

Lau did not immediately respond to requests for comment. His clinic had been providing Sinovac vaccines and not the Pfizer/BioNTech ones, which are only available at larger public sector facilities.

Distrust of the mainland has intensified among residents in recent years with months of anti-government and anti-China protests driven by a perception that Beijing is pushing the semi-autonomous city onto a more authoritarian path.

Media reports of several deaths after vaccinations have also kept some people jittery even though the government has said there was no direct link between the shots and the deaths.

With low levels of infection in the city, many people are opting to wait and see before getting a shot.

“I won’t get vaccinated yet, I’m going to wait until more people get it,” said one 40-year-old man who gave his name as just.

“I have more confidence in BioNTech. It’s a foreign one after all … the quality is guaranteed.”

Only about 5% of Hong Kong’s 7.5 million residents have been vaccinated.

For 67-year-old resident surnamed Lau there was no question as to which vaccine he was going for on Tuesday – the Pfizer/BioNTech one.

“It has better data, there are more people getting it internationally. The other one, the data is not clear.”

City leader Carrie Lam has repeated called for people to get vaccinated.

“When many places all over the world are scrambling for vaccines, we have a pretty assured supply,” she said on Tuesday. – Reuters