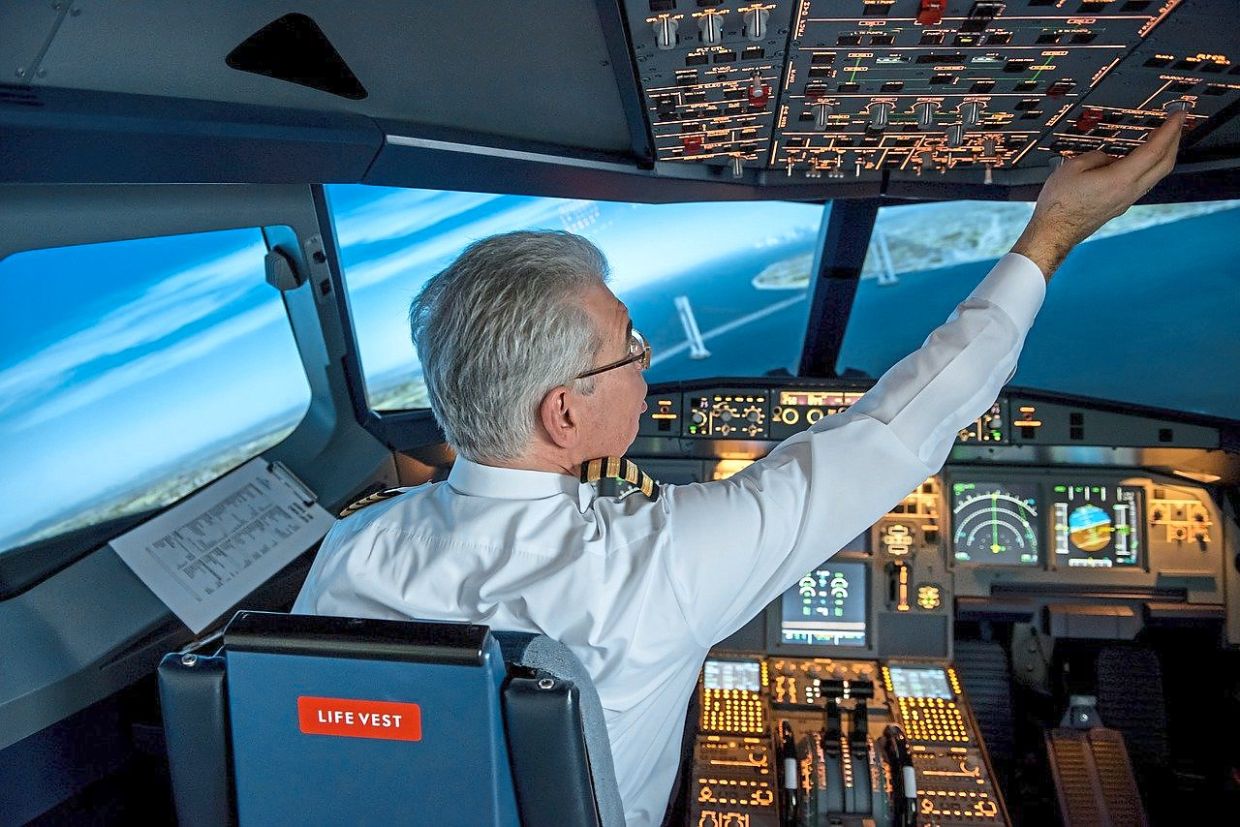 Aviation experts acknowledge that when pilots are inactive for several months, their skills and proficiency deteriorate. — THOMAS FENGLER/Pixabay

A pilot preparing to pull a passenger jet away from an airport gate forgot to disengage the parking brake, damaging a part of a towing vehicle that was trying to pull the plane to the runway.

Another pilot had so much trouble landing a passenger jet on a windy day that it took three tries before the plane touched down successfully.

In another incident, the first officer forgot to turn on the anti-icing mechanism that ensures the altitude and airspeed sensors on the outside of the plane are not blocked by ice. Luckily for the passengers, the plane completed its flight without problems.

These incidents are among at least a dozen flying errors and mishaps since May that pilots and first officers have attributed, at least in part, to being out of practice because the Covid-19 pandemic – which pushed air travel demand to the lowest levels in decades – had kept them away from flying for a while. Since planes are carrying lighter loads these days, pilots can miscalculate the speed and thrust needed for a landing. — The Pixelman/Pixabay

“Because I had not flown in a few months I was rusty, ” the first officer who forgot to activate the anti-icing mechanism said in an anonymous report to a safety reporting system run by Nasa.

“I felt that my recollection was strong enough, but in reality I should have taken some time to review” the standard operating procedures, he added.

Aviation experts and airline representatives acknowledge that when pilots are inactive for several months, their skills and proficiency deteriorate. Among the most common errors are coming in too fast or too high during a landing or forgetting to get clearance from the air traffic control tower before descending to a lower altitude.

“The key to flying safely is frequency, ” said Richard G. McSpadden Jr, senior vice president at the Aircraft Owners and Pilots Association’s Air Safety Institute in the United States. “You are not as sharp if you haven’t flown for a while.”

Since the start of the Covid-19 pandemic, airlines have dramatically reduced the number of daily flights on some routes and, in some cases, eliminated service to low-demand destinations.

As a result, some pilots have been brought back to work after being away for up to four months. Delta Air Lines announced recently that it planned to bring back about 400 pilots by summer in hopes that the distribution of Covid-19 vaccines will boost demand for travel.

So far, there have been no reported incidents of out-of-practice pilots causing accidents that have injured passengers. Aviation experts say there are enough backup systems in modern passenger jets to prevent minor oversights from becoming serious accidents. Since March last year, many airlines around the world have had to ground their planes due to border closures and lack of flight demands. — JUSTIN TALLIS/AFP

However, an Airbus 330 passenger jet trying to land at Kualanamu International Airport in Indonesia on Sept 15 last year veered off the runway and onto the adjoining dirt and weeds. None of the passengers were injured.

Indonesia’s transportation safety agency, known as the KNKT, concluded that “during the Covid-19 pandemic the operation department had difficulties (trying) to maintain pilot proficiency”.

To ensure pilots in the US maintain proficiency even when they are not scheduled to work for long stretches of time, the Federal Aviation Administration bars pilots from flying a commercial jet unless they have performed at least three take-offs and three landings – either on a plane or in a simulator – in the previous 90 days.

In federal documents, the FAA defended the grace periods, saying that putting pilots into cockpits or simulators to practice flying increases the risk of spreading Covid-19. The FAA noted that the grace periods were requested by several aviation industry groups, including Airlines For America, the trade group for the nation’s largest airlines, and the Regional Airline Association, a trade group for regional carriers in the US.

No public hearings were held on the changes because the FAA concluded that that pandemic emergency required the new rules take effect immediately.

James Belton, a captain of Boeing 767 planes and spokesman for the union that represents United Airlines pilots, said United pilots have met the FAA’s 90-day proficiency policy before going back to work and have not used the grace periods.

“Our pilots only leave our training centre when they are fully trained, comfortable and ready to fly, ” he said.

Representatives of the Air Line Pilots Association complained in July that several Delta pilots were denied access to simulators so they could practice before flying again and were penalised for making such requests, according to an article in Forbes. Delta denied the accusations, and an Air Line Pilots Association representative said recently that the concern over access to simulators has since been been resolved.

There is other evidence that out-of-practice pilots have been a problem.

The International Air Transport Association, a trade group for the world’s airlines, reported a steep increase last spring in the rate of planes making “unstable approaches”, which typically occur when pilots try to land at too high a speed or without enough thrust and have to make last-minute adjustments.

The airlines group reported that the rate of unstable approaches jumped from about 13 or 14 for every 1,000 flights before the pandemic to more than 35 per 1,000 in May last year. The problem of unstable approaches increased in airports around the world in the spring and summer of 2020, the group said, but the rate returned to pre-pandemic levels in the last few months.

“Extended absence of a significant number of flight deck crew can lead to diminished skills, less effective situational awareness and can lead to deviation” from standard operating procedures, the group said in a memo to its members in August.

“I’m comfortable with the safety requirements, ” Byrnes said. “I don’t think there is an imminent danger.”A weighty problem

The Aircraft Owners and Pilots Association recently offered a video series on its website to help out-of-practice pilots sharpen their flying skills. The series includes tutorials on using the radio to communicate with an air traffic control tower and tips on making a smoother landing.

American Airlines, one of the world’s largest carriers, was also worried about pilots being out of practice, so it began more frequent reviews of its data on pilot performances.

The pilot data from 2020 showed no loss in proficiency, said Kimball Stone, American Airlines’ senior vice president of flight operations. “There has been no degradation of skills, ” he said.

It is not just the lack of practice that can lead pilots to make errors.

During the pandemic, planes have been carrying fewer passengers – an average of 10% of the seats on US flights were filled in April, down from 80% before the pandemic – which means a much lighter load, said Mark Searle, global director for safety at the International Air Transport Association.

If pilots erroneously assume the plane they are flying is as heavy as it was before the pandemic, they can miscalculate the speed and thrust needed for a landing, he said.

In addition, Searle said the drop in demand for air travel has led to less crowded skies, so there’s less need for planes to take circuitous paths in order to steer clear of one another. The shorter, more direct routes could confuse a pilot who arrives at a destination sooner than expected, he said.

But Searle said he has faith that pilots are keeping tabs on such changes.

“If they adhere to standard operation procedures that we practice, I don’t think there is much of an issue, ” he said.

Still, there have been mistakes, as shown in Nasa’s Aviation Safety Reporting System. The system was developed so that pilots and other airline crew members could anonymously report mechanical glitches and human errors without fear of reprisal from air plane manufacturers or airline management.

In one report, a pilot erroneously lined up to land on the wrong runway. Another pilot accidentally pushed the button to disengage the autopilot. The first officer on another flight made an unusually steep bank after misreading the instruments in the cockpit.

In each case, the pilots and first officers blamed the errors on being out of practice.

In September, the first officer on a commercial jet reported having misjudged the distance to the runway during a landing and causing the plane to descend too low. Instead of aborting the landing and circling the airport for another try – the safest option – the first officer made last-minute adjustments to land.

“Contributing factors included light turbulence requiring constant power adjustments, ” the first officer said. “Also, lack of recent flight time due to taking leave – this was my first approach/landing in a number of weeks on top of very limited flight time in the past six months.”

During the October incident in which a passenger plane tried to pull away from a gate with the parking brake still engaged, the pilot and the first officer said in a Nasa report that they’d even discussed the risks of being out of practice before the flight.

“In my case, it had been 40 calendar days since my last flight, ” the first officer said.

The captain added: “We are flying less, so we need to be even more attentive. Better attention to detail.” – Los Angeles Times/dpa