KUALA LUMPUR (March 16): Wild swings were seen today in shares of IT company Dataprep Holdings Bhd, which has been in the limelight over its share price’s meteoric rise in the past one-month period.

On March 12, Dataprep said its subsidiary Dataprep (M) Sdn Bhd had signed a Memorandum of Collaboration (MoC) with an IT consulting and services provider company Asia Coding Centre Sdn Bhd for the provision of integrated solution technology for Covid-19 screening.

Two days earlier, Bursa Malaysia Securities advised investors to exercise caution in the trading of Dataprep shares, which had skyrocketed to RM3.15, from barely 18 sen in early January.

It currently has a market capitalisation of RM2.1 billion. This also means the loss-making company had just gained RM2 billion worth of market cap in just a mere month, from when it was barely worth RM100 million prior to the recent surge. 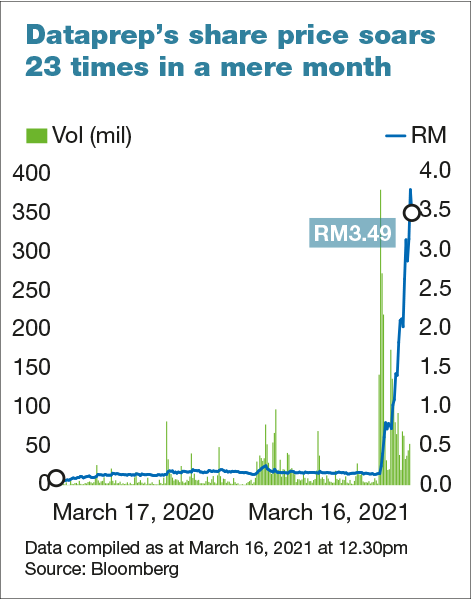 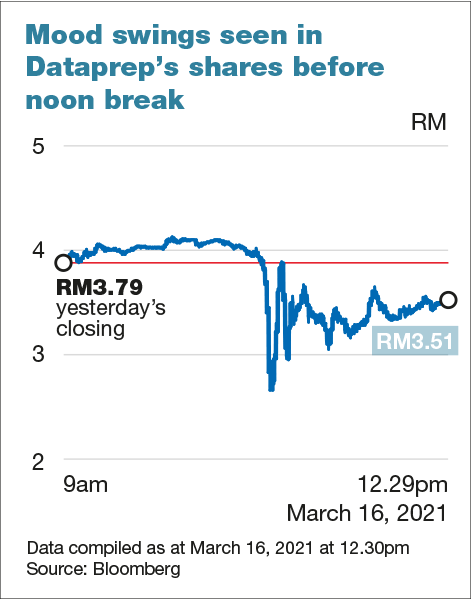 This little-known counter had been, for most of the time, trading below 50 sen since 2005.

The crazy surge in share price had even gotten the stock exchange regulator to warn investors, advising them to exercise caution and make informed decisions in the trading of Dataprep shares.

The exchange regulator had also said it would not hesitate to take appropriate regulatory action to ensure fair and orderly trading of Dataprep shares.