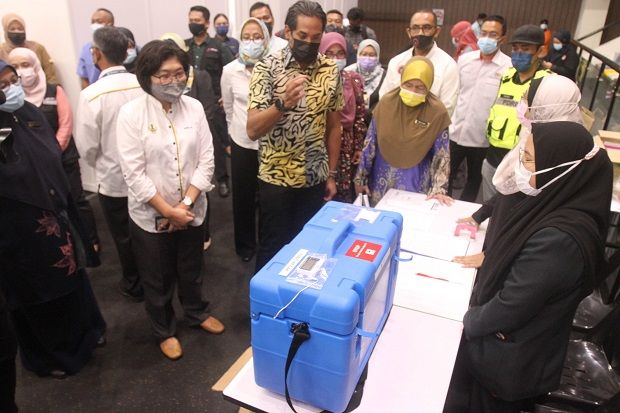 IPOH: Malaysia is in consultation with India in the procurement of the Novavax vaccine, says Khairy Jamaluddin.

The coordinating minister for the National Covid-19 Immunisation Programme said he has been negotiating with the Indian High Commissioner over the matter.

He said talks were being conducted not only with the Indian government, but also with a few companies including with the Serum Institute of India.

“India has certain terms in the sales of the Novavax vaccine that we must take into consideration as well.

“The country has also offered to sell us their homegrown vaccine made by Bharat Biotech, but that vaccine has yet to go through its phase three clinical trials, ” he told reporters after visiting the vaccination centre at Indera Mulia Stadium here Tuesday (March 16).

The Science, Technology and Innovation Minister was replying to a statement by PKR president Datuk Seri Anwar Ibrahim questioning if Malaysia was among the countries eligible for the free vaccines that India was offering, and if Malaysia was considering to purchase other vaccines which were cheaper and more effective.

Khairy added that Malaysia does not qualify as a lower income country, where a lot of such countries had received free vaccines from China, India and Russia.

“We are categorised as an upper middle income country, where we don’t get discounts and neither do we get free vaccines.

“Unfortunately we are a fully paying country, we purchase all vaccines and don’t get anything for free, ” he added.

On another matter, Khairy said when phase three of the vaccination programmes starts for the general population, bigger centres must be allocated.

He said they were hoping that the vaccination programme would be completed by this year itself.

“For example, Stadium Indera Mulia can accommodate 1,400 vaccinations per day, but for phase three, we will need an area where some 5,000 people can be vaccinated daily.

“For example in Kuala Lumpur we will find a place that would be able to vaccinate about 8,000 people daily, ” he added.

In several states, especially in the East Coast and Sabah, where registration for the vaccination programme is low, Khairy said community engagement in rural and interior areas was being carried out.

“I have also met MPs from several states, for instance, those in Kelantan and Terengganu to ask them to encourage their constituents to register for the programme, ” he added.