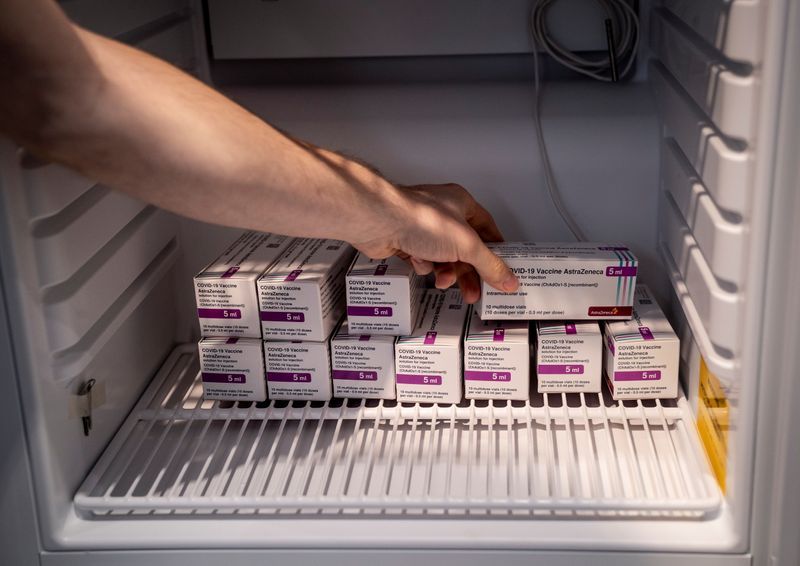 COPENHAGEN (Reuters) – Health authorities in Denmark, Norway and Iceland on Thursday suspended the use of AstraZeneca’s COVID-19 vaccine following reports of the formation of blood clots in some people who had been vaccinated.

Austria earlier stopped using a batch of AstraZeneca shots while investigating a death from coagulation disorders and an illness from a pulmonary embolism.Still, the European medicine regulator EMA said the vaccine’s benefits outweighed its risks and could continue to be administered.

Europe is struggling to speed up a vaccine rollout after delivery delays from Pfizer and AstraZeneca, even as a spike in cases amid a more contagious virus variant has triggered fresh lockdowns in countries like Italy and France.
Denmark suspended the shots for two weeks after a 60-year-old woman, who was given an AstraZeneca shot from the same batch used in Austria, formed a blood clot and died, Danish health authorities said.

Their response was also prompted by reports “of possible serious side effects” from other European countries.

“It is currently not possible to conclude whether there is a link. We are acting early, it needs to be thoroughly investigated,” Health Minister Magnus Heunicke said on Twitter.

The vaccine would be suspended for 14 days in Denmark.

“This is a cautionary decision,” Geir Bukholm, director of infection prevention and control at the Norwegian Institute of Public Health (FHI), told a news conference.

FHI did not say how long the suspension would last.

“We … await information to see if there is a link between the vaccination and this case with a blood clot,” Bukholm said.

Iceland on Thursday suspended jabs with the vaccine as it awaited the results of an investigation by the EMA. Italy, also on Thursday, said it would suspend use of an AstraZeneca batch different to the one used in Austria.

Some health experts said there was little evidence to suggest the AstraZeneca vaccine should not be administered and that the cases of blood clots corresponded with the rate of such cases in the general population.

“The problem with spontaneous reports of suspected adverse reactions to a vaccine are the enormous difficulty of distinguishing a causal effect from a coincidence,” Stephen Evans, professor of pharmacoepidemiology at the London School of Hygiene & Tropical Medicine, told Reuters.

Evans added that the COVID-19 disease was very strongly associated with blood clotting.

Phil Bryan, head of the UK Medicines and Healthcare Products Regulatory Agency (MHRA) said reports of blood clots so far didn’t exceed what would have occurred naturally in the vaccinated population.

“Available evidence does not confirm that the vaccine is the cause,” he said.

More than 11 million doses of AstraZeneca’s vaccine have so far been administered across the UK.

In a statement, AstraZeneca said it had found no evidence of an increased risk of pulmonary embolism or deep vein thrombosis in safety data of more than 10 million records, even when considering subgroups based on age, gender, production batch or country of use.

“In fact, the observed number of these types of events are significantly lower in those vaccinated than what would be expected among the general population,” it added.

The drugmaker said this week there had been “no confirmed serious adverse events associated with the vaccine”. It said it was in contact with Austrian authorities and would fully support their investigation.

The European Union’s drug regulator, the EMA, said on Wednesday there was no evidence so far linking AstraZeneca to the two cases in Austria.

EMA said it understood the decision by Denmark and Norway was taken as a precaution.

Four other countries – Estonia, Lithuania, Luxembourg and Latvia – have stopped inoculations from the batch while investigations continue, the EMA said.

The batch of 1 million doses went to 17 EU countries.

Swedish authorities said they did not find sufficient evidence to stop vaccination with AstraZeneca’s jab.

“There is nothing to indicate that the vaccine causes this type of blood clots,” Veronica Arthurson, head of drug safety at the Swedish Medical Products Agency, told a news conference.

The Danish Medicines Agency said it had launched an investigation into the vaccine together with corresponding agencies in other EU countries and the EMA.

So far, 138,148 Danes have received a shot with AstraZeneca’s vaccine in a country of 5.8 million. The Nordic country, which also uses vaccines from Pfizer-BioNTech and Moderna, is set to receive 2.6 million doses from AstraZeneca over the coming months.

Denmark’s Health Authority said the final date for when it expects all Danes to have been fully vaccinated would be pushed back by four weeks to Aug. 15.

Spain on Thursday said it had not registered any cases of blood clots related to AstraZeneca’s vaccine so far and would continue administering the shots.

(Reporting by Nikolaj Skydsgaard and Jacob Gronholt-Pedersen in Copenhagen, and Victoria Klesty in Oslo; Additional reporting by Ludwig Burger in Frankfurt, Johan Ahlander in Stockholm, Crispian Balmer in Rome and Kate Kelland in London. Editing by Alex Richardson, Nick Macfie and Bernadette Baum)