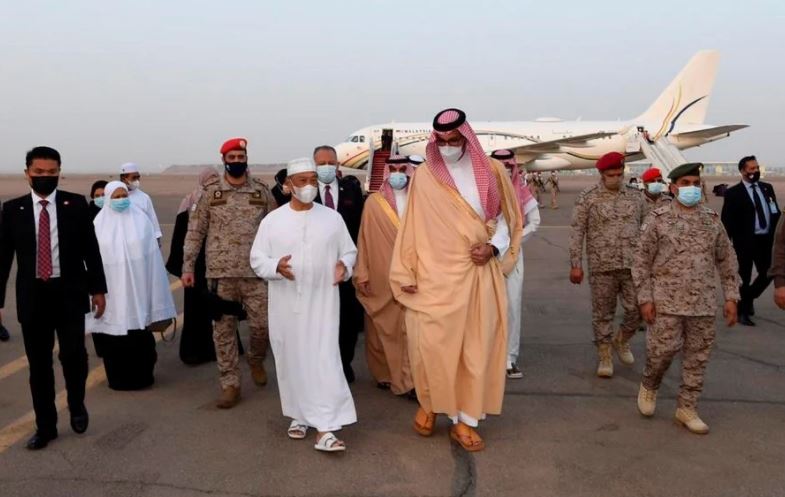 Foreign Minister Datuk Seri Hishammuddin Hussein said the visit would enable both countries to resume their good relationship and build on the momentum to move forward post Covid-19 and beyond.

“What we see happening today is symbolic of a lot of hard work that has been done for over a year now, since the change of government.

“We hope to maintain this momentum, not only with Saudi Arabia but other countries in the region too,” he told reporters after his arrival here yesterday.

He said the bilateral relationship between the two countries is important on many levels, including matters such as haj.

“To make sure that the relationship is on a sound foundation is one thing, but to move that level of confidence to another level, I hope the visit by the prime minister will be able to do that,” he said.

He said Muhyiddin’s visit signified Malaysia’s commitment to the importance of the relationship between the two nation.

Hishammuddin said the relationship between both countries had suffered a blow in the past.

“The relationship was not at a level that we had hoped for, but both parties have shown willingness to fix it,” he said, adding efforts to renew and rebuild the relationship began a year ago.

Hishammuddin said this was also the first time that a head of government was accorded an official visit to the kingdom following the historic Al Ula Conference on Jan 5.

“It was not in the original itinerary. His Royal Highness the Crown Prince has made the decision himself.

“The whole airport will be closed as HRH the Crown Prince wants to welcome the prime minister there,” he said.

Hishammuddin said several substantive matters have already been agreed upon ahead of the official programme at Al-Yamamah Palace tomorrow.

On the official welcoming ceremony at Al-Yamamah Palace tomorrow, with Muhyiddin having a virtual audience with King Salman Abdulaziz Al-Saud, he explained that since the start of the pandemic, King Salman had not granted any physical audience with any government leader.

“As far as I know, even virtual meetings have not been done before (with King Salman). If the meeting proceeds tomorrow in a virtual manner, then that in itself is incredible in the current landscape with Covid-19.

“This shows the close relationship we have with the highest leadership in Saudi Arabia. For King Salman to have requested the Crown Prince to represent him to receive and hold discussions with the prime minister, that in itself is something that I am very thankful for.”

Muhyiddin’s visit to Saudi Arabia from March 6 to Thursday is at the invitation of King Salman. Prior to his arrival in Riyadh tonight, for the official programme tomorrow, Muhyiddin, accompanied by wife Puan Sri Noorainee Abdul Rahman, had performed the umrah in Makkah and visited Madinah, the two holy cities.

In Makkah, Muhyiddin was granted access inside the Kaabah.