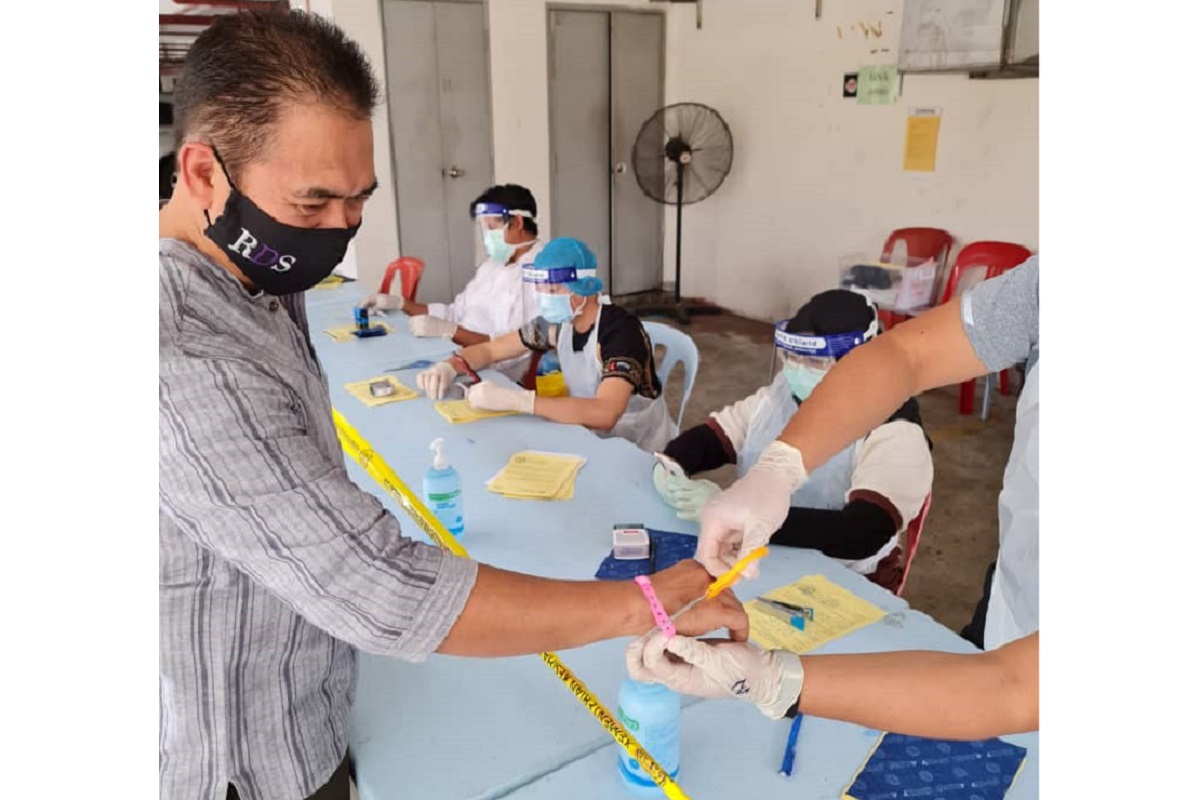 KUALA LUMPUR (Feb 11): Prominent lawyer Rosli Dahlan, who was the 33rd confirmed Covid-19 patient in Malaysia — also known as Patient #33 — spoke to The Edge last year about his experience under quarantine at the Sungai Buloh Hospital.

Today, a year after the disease was first detected in the country, the ex-Covid-19 patient shared more about his personal experience, and why he thinks Malaysians should not be influenced by fake news or second-guess the health authorities in their decisions.

Below is his message, reproduced in full:

One year ago when Covid-19 struck our shores, I wrote a “Big Thank You” note to express my deepest appreciation to our front liners from Kementerian Kesihatan Malaysia (KKM).

Fear had gripped the heart of our nation and all sorts of sensational stories were spun which caused greater panic. As one of the “infected pioneers”, I felt society needed to be calmed and for us to come together as great citizens of this blessed country to stand united as patriots in fighting this new war — the Covid-19 pandemic.

The government’s timely lockdown saved our country from the ravages of this pandemic that saw many countries across the globe, particularly Europe, crippled by the hundreds of thousands of deaths, witnessing approximately 92,000 deaths recorded in Italy and over 63,000 deaths in Spain. Today, the United States had suffered 479,772 deaths and the new US President Joseph Biden is still struggling to make amends for former President Donald Trump’s reckless and irresponsible policy on Covid-19. Malaysia did admirably well and evaded the second wave successfully.

The whole world is now facing the third wave. Malaysia is not excluded. The Sabah State elections and the New Year celebrations illustrated time and again that our society forgets easily — Malaysians mudah lupa. We are now paying heavily for our callousness.

A segment of our society that had become tired of the lockdown displayed a cavalier attitude on compliance with the SOP. This caused a spike in the Covid-19 infections and deaths. Last month, Malaysians were alarmed that we recorded the highest daily fatalities of 24, with 5,728 new infections.

We had prided ourselves with our earlier successes in facing the first and second waves of the pandemic. Then disaster struck? What happened? How did our success become undone so easily? Where did we go wrong? We all knew the answer yet we still asked because we were in denial and will never accept our own faults.

Then began the blame game, the finger-pointing and the circus of accusations started again. Things became explosively messy when the politicians jumped in with all their political schemings passing off as pragmatic solutions.

The most recent political issue is the SOP on quarantine. This is where I want to share with you my experience.

As a professional, very recently, I had to travel overseas on work. Before leaving, I had to comply with the SOP by having a prior 72 hour PCR swab test. It was negative and I was allowed to travel. While overseas, my host country required that I must have a swab test before every meeting. This was a short trip and yet I had a total of five PCR swab tests there over two days which were all negative and I was allowed to board the aircraft to return home.

While I was there, I read about the controversy that had erupted back home over the shorter quarantine period for specific classes of travellers. Accusations were hurled at the government, specifically against the Ministry of Health, for devising an allegedly discriminatory policy following a government gazette that allowed for a three-day quarantine period whereas it was generally stipulated to be 10 days. Victims of these political assaults were the government leaders. Things became politicised as everything else is in Malaysia.

I also read an article of comments by several lawyers who had given unsolicited public advice that the shortened quarantine is illegal and discriminatory, citing the Federal Constitution (see: 3-day Covid-19 rule for ministers illegal, say lawyers). Quite apart from the fact that I think they conveniently misconstrued section 15 of Act 342, it dawned on me that I may be walking into a political storm if I was planning to seek an exemption or reduction of the quarantine that may be imposed on me.

My plan was to make this request when I touch down in KL. Upon landing, our gallant front liners from KKM took my temperature, which was normal, and did the swab on my throat and pink-tagged my wrist. I was told that I have to wait a few days for the result. Pending that, I was served with a Home Surveillance Order (HSO) under section 15 of Act 342 which empowered an authorised KKM officer to impose such order. I was politely told by the nurses to make my enquiry on exemption/reduction of quarantine to the Pejabat Kesihatan Daerah (PKD).

I had already informed my wife to prepare my isolation room as required by the HSO. On the way home from the airport, I called the PKD who advised that the pink tag will remain on my wrist until my test results are known to be negative. Realising that the result of the earlier airport swab test would take some time, I detoured to do another PCR test at a medical facility where the result can be known in under three hours.

To my mind the issue is simple. I am an ex-Covid-19 patient with high antibody based on previous test results as I was also one of the pioneer plasma donor program (see: COVID-19: Bekas pesakit derma plasma darah). I have had many and deep discussions with doctor friends as well as experts in this area.

To simplify this issue, my position as an ex-Covid patient is akin to those who have been vaccinated. It would make nonsense of the need to vaccinate if one is still imposed with quarantine requirements. As such, I would not need to be subjected to any quarantine or to a shorter quarantine once all the test protocols are complied with.

I would like to share with you my discussion with the PKD so that you will understand that the decisions made by PKD/KKM under section 15 are scientific based and not on sentiments, whimsical or arbitrary.

Essentially, the PKD agreed that my request for a waiver or reduction of the quarantine period would be considered favourably because they say I have immunity. Further, the PKD noted that for my two-day stay there, I had been swabbed 2-3 times a day as per the requirement of the host country. Thus, the PKD would be agreeable to discharge the HSO once my test result upon returning to KL is negative. This is the significant part of the PKD’s findings:

“PKD: We have your medical history as Covid-19 patient in 2020 and we consider you have immunity. We note you swabbed negative before departure. We also note you had 5 swab tests while in that country. We do not think its a problem to discharge you. By right it should not be an issue if RTK-Ag is negative. Ag = Antigen. It’s a swab test but result is instant. In your case, you did 1 full PCR before departure and 5 full PCRs there before every meeting. You would be entitled to the minimum quarantine of 3 days as announced by Health Minister Dr Adam Baba. We also note that you were proactive in doing an additional test other than the KKM test upon landing in KL which result is again negative. This means that:

“In total you had tested negative 7 times over 4 days other than the fact that you abided by the limited contact/exposure protocol.

“For the good news, yes please come to PKD today and we will issue you a discharge order and cut off your pink tag.”

I was simply elated! I WA my wife to tell her that she doesn’t have to isolate me to another room but I would still do so if she feels more comfortable. You see, my wife and I are both Covid-19 veterans from February to March 2020.  Thus, we are very familiar and take these things very seriously.

The PKD also shared with me that my discharge would also save KKM personnel from being wasted on having to monitor me. They could be released to do other things and this would also allow me to be economically productive for the country.

I was particularly pleased because this shows that KKM is very logical and reasonable. This would also help clarify to the lay public that common people like us could also have a shortened quarantine period once there is compliance with the SOPs and our test results are consistently negative. This is not a privilege of the elite class.

I wanted to share this for the public to understand that KKM’s decisions are based on law and science and not because of discrimination, prejudice or granting of privilege to certain classes. The public, including lawyers, need to understand that under section 15 of Act 342, KKM officers who are empowered to impose the HSO are equally empowered to issue an earlier discharge. In my case, my discharge was even faster and earlier than some government leaders based on my own medical history and facts. So, this issue of discrimination had been wrongly fanned to mislead the public.

I wanted to share this experience as I did one year ago so that we as Malaysians can think clearly and not be influenced by fake news. This could help lighten the burden of our frontliners particularly the KKM officials — from the Minister, the DG, the PKDs right down to the nurses who are in direct contact with the public. We should support and encourage them to do their job professionally and not to second guess them. We should not put them on a defensive over their operational decisions and policies crafted to manage these resources.

I am not a politician, MP nor part of the government, certainly far from being a minister. I am just like you and the general public, just another professional seeking to earn a livelihood in these difficult times. Part of my job is to advise and accompany clients mostly business people in negotiations for trade and business deals.

Trade and commerce is central to the country’s economic life just as governing the country is central to being the government of the day. The proper discharge of our respective roles will ensure that the country’s economic recovery can be successfully achieved post-pandemic. To facilitate trade, commerce and governmental relationships, at times, direct personal engagements are inevitable. There is so much that Zoom, Teams or Internet conferencing can achieve. Man is by nature an interactive social animal. Thus, our systems and policies must facilitate the growth of international trade and commerce which necessitate international travels.

The King has already advised that there should be less politicking and concentrate more on rebuilding the country’s economy that had been badly battered.

One year ago at the dawn of this pandemic, it was about saving individual lives. Today, there is the added burden on our nation’s government to balance the need to save Iives and also save livelihood. Life without the means to live it, would be catastrophic for the country and the people.