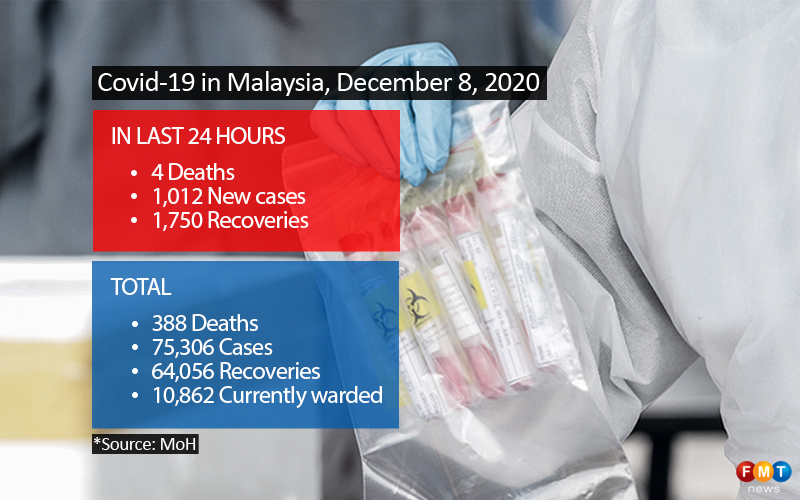 PETALING JAYA: The health ministry has reported 1,012 Covid-19 cases and four deaths in the past 24 hours.

Health director-general Dr Noor Hisham Abdullah said there were 1,750 recoveries, bringing the total number of those discharged to 64,056.

In a statement, Noor Hisham said the 1,012 cases bring the total number of infections in the country to 75,306.

Meanwhile, the four deaths raises the toll to 388.

There are currently 10,862 active cases with 126 receiving intensive care, of which 62 require respiratory assistance.

Selangor recorded the highest number of cases today with 417, of which 115 were from existing clusters. A total of 116 cases were from close contact screenings, 185 from other screenings and one was imported. Selangor’s cases made up 41.2% of today’s overall total.

Sabah had the second-highest number of cases with 271, of which 121 were from close contact screenings. Seventy cases were from existing clusters and 80 from other screenings. Sabah’s cases made up 26.8% of today’s overall total.

Johor had 108 cases, with 63 were from existing clusters, 22 from close contact screenings and another 23 from other screenings. Johor’s cases made up 10.7% of today’s overall total.

Kuala Lumpur had 98 cases, 48 of them linked to clusters, including three from today’s newly-detected Darul construction site cluster. Thirty-three cases were from other screenings, 12 from close contact screenings and five were imported cases.

Other states and federal territories with new cases reported today were Pahang (33), Perak (29), Negeri Sembilan (23), Penang (18) and Kedah (10). Sarawak and Kelantan each recorded two cases while Putrajaya had one.

Of today’s cases, 44 came from prison and temporary detention centre clusters, the bulk of which were from the Tembok prison cluster (24 cases) in Kedah.

All four deaths today occurred in Sabah. Noor Hisham said they were three Malaysians and one foreigner aged between 33 and 92. Three of them had a history of chronic illnesses.