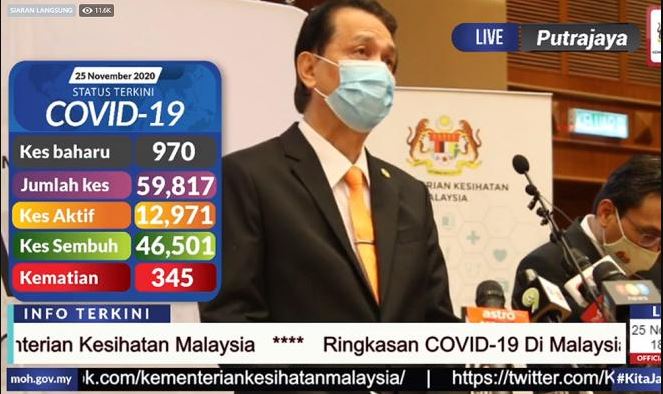 Most of the new cases were reported in Negeri Sembilan (32.8 percent of new cases), followed by Sabah (30.2 percent) and Selangor (11.9 percent).

In Negeri Sembilan, nearly all the new cases (94.7 percent) were from the Bakti cluster, which involves a prison.

The cluster with the next biggest increase was the new D’Bajaru cluster in Sabah (56) and the Pengkalan Barat cluster in Penang (40).

The Teratai cluster, which currently has the largest active cluster, saw 17 new cases. This cluster involves a Top Glove factory in Selangor.

Two of the four new deaths were reported in Sabah. The cumulative Covid-19 death toll for Sabah stands at 199, or 57.1 percent of the national total (345).

Details of the four casualties – all female – are as follows:

‘Patient 56,682’ – Malaysian female, 68, passed away at the Duchess of Kent Hospital in Sandakan, Sabah.

‘Patient 56,891’ – Malaysian female, 54, passed away also at the Duchess of Kent Hospital in Sandakan, Sabah and;

‘Patient 58.707’ – Foreign female, 77, passed away at the Labuan Hospital with no comorbidity.

Perlis was the only territory which did not report new cases. A breakdown of new cases are as follows:

As of yesterday, the country’s laboratories had the capacity to perform 59,485 RT-PCR tests of which 24,386 were performed (41 percent of capacity).

In Sabah, there are four laboratories capable of performing a total of 2,750 tests daily. Yesterday, 2,312 tests were processed.

The D’Bajaru cluster has 90 cases involving the Lahad Datu district in Sabah. The index case was identified during part of a targeted screening of two villages.

The Gangsa cluster has 30 cases involving the Kuala Langat district in Selangor. The index case was identified during workplace screening. Only one case involves a Malaysian citizen.

The Batu Tujuk cluster has 144 cases involving the Batu Pahat and Johor Bahru districts in Johor. The index case suffered from a severe acute respiratory infection and tested positive for Covid-19 on Nov 22.

The Tanjung Bunga cluster has 11 cases involving the Johor Bahru district in Johor. The index case suffered from a severe acute respiratory infection and tested positive for Covid-19 on Nov 21.

The Kerengge cluster has six cases involving the Marang district in Terengganu. The index case reported symptoms and tested positive on Nov 17.