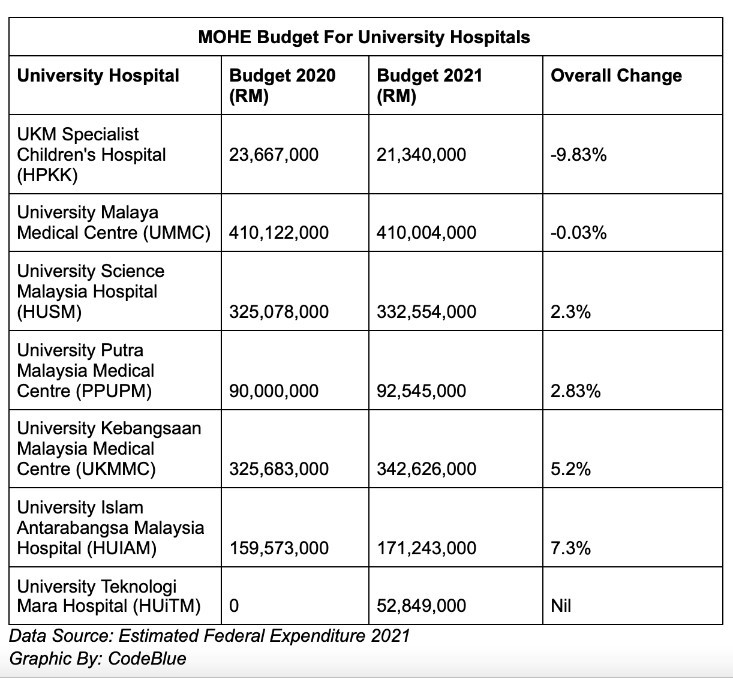 KUALA LUMPUR, Nov 25 — The allocation for Universiti Malaya Medical Centre (UMMC), a Covid-19 treatment hospital, was reduced by RM118,000 under Budget 2021, while the medicines allocation for all teaching hospitals was cut by RM5 million.

Under the Estimated Federal Expenditure 2021, it was noted that the allocation for UMMC was cut by 0.03 per cent from RM410.122 million to RM410.004 million. University hospitals fall under the Ministry of Higher Education (MOHE). The total allocation for teaching hospitals under MOHE has been increased by 6.67 per cent from RM1.334 billion this year to RM1.423 billion next year.

The UKM Specialist Children’s Hospital (HPKK), which is under University Kebangsaan Malaysia Medical Centre (UKMMC), had a budget cut of 9.83 per cent, from RM23.67 million for the year 2020 to RM21.34 million for the year 2021. However, UKMMC received an increase in allocation for next year by 5.2 per cent from RM325.68 million to RM342.63 million.

Moreover, a new university hospital, University Teknologi Mara Hospital, received an allocation of RM52.85 million for 2021. All other teaching hospitals, except UMMC and HPKK, received increased allocations under Budget 2021.

UMMC is one of the Covid-19 treatment hospitals listed under MOH for Kuala Lumpur. Under Budget 2021, an additional RM1 billion has been allocated to fight the third wave of the Covid-19 epidemic in Malaysia.

From this RM1 billion, RM475 million is allocated to purchase reagents, test-kits, and consumables for MOH hospitals, as well as RM318 million for personal protective equipment (PPE) and hand sanitisers for MOH frontliners.

Under the same RM1 billion for Covid-19, a total of RM50 million has been allocated for the purchase of equipment, laboratory test supplies, and medicine for university teaching hospitals. The finance minister’s budget speech did not provide an exact breakdown for these items, nor state which ministries exactly the RM1 billion allocation is going towards, as this sum is not listed in the Estimated Federal Expenditure 2021 document.

CodeBlue also noted that under the federal government’s Budget 2021 that was tabled in Parliament on November 6, there has been a cut by five per cent under medications for teaching hospitals from RM100 million in 2020 to RM95 million next year.

Under MOH, the allocation for pharmacy and supplies was also cut by 73.58 per cent. However, the Ministry of Finance (MOF) said that these allocations were not cut, but reclassified to different allocations that are under specific programmes.

Hence, it is unclear why there is a cut in the allocation for medications for teaching hospitals and it’s unlikely it has been reclassified to specific programmes, considering there’s a clear breakdown for specific programmes under MOHE. It is also unclear if the allocation for drugs for university hospitals, announced under the special RM1 billion sum for Covid-19, makes up for the RM5 million cut in the MOHE budget.

University hospitals like UMMC provide advanced cancer treatment that may not be available in government hospitals like immunotherapy, which is not offered in MOH hospitals.

Head of the Galen Centre for Health and Social Policy, Azrul Mohd Khalib, said that the budget for university hospitals comes from both the government and from the revenue gained from fees and charges imposed on patients.

“Unlike the MOH hospitals where around 97 per cent of the actual cost of a medical procedure is subsidised by public funds, university hospitals need to partially recover their costs to ensure sustainable operations and cannot solely depend on the federal budget,” Azrul said.

Charges which include room rates, surgery, and mediations are still partially subsidised by these hospitals, Azrul said.

“Three years ago, a caesarean section for example, would be charged RM1,200 at a MOH hospital, around RM10,000 at a private hospital, and RM8,000 at the UMMC, a teaching hospital.”