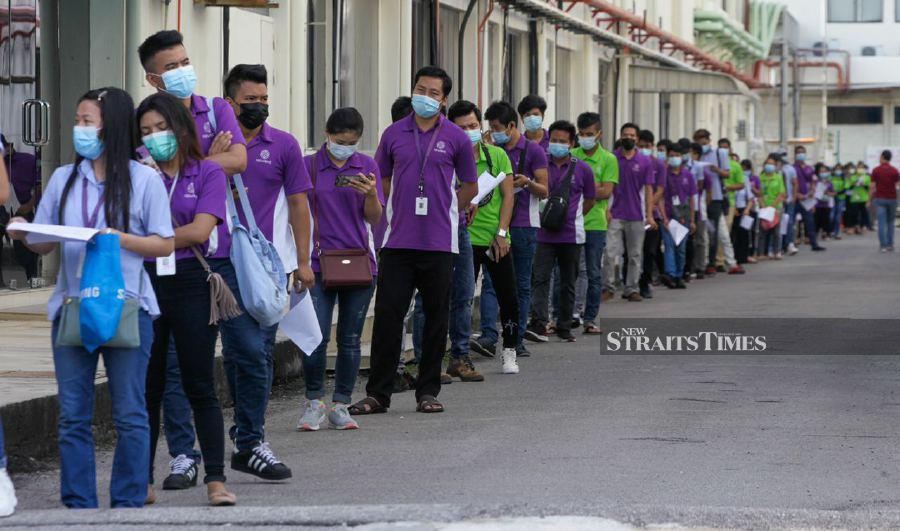 GEORGE TOWN: Operations at a manufacturing facility in Bayan Lepas here was partly affected today after some 600 employees were told to undergo screening for Covid-19.

The New Straits Times learnt that the factory had reported several positive Covid-19 cases recently, believed to be among its foreign workers.

An Indonesian factory operator, who identified herself as Seri, in her 20s, said when they arrived for work this morning, they were told that health workers would carry out swab tests.

She said prior to the tests, the health workers had interviewed them and taken down their particulars.

She added that the pink wristband was then affixed on them (she and her friend) before they were sent home on buses after the swab tests.

“We were then told that we are now under home quarantine.

“I am very worried. I hope my test result will come back negative,” she said when approached.

Seri is staying at the workers’ hostel in Relau, where many positive Covid-19 cases were reported since last week, believed to be linked to the Intan cluster.

Besides Relau, the factory also has other hostels in Bayan Lepas.

“Where I am staying (Relau), I was told there were many positive Covid-19 cases reported since last week,” she added.

Asked if any of her friends had been tested positive, Seri said she was unsure.

“But I know there are active cases reported in the factory, involving the workers,” she said.

Meanwhile, checks by the NST at the factory today showed mass screening being carried out inside the facility.

As of yesterday, the Intan cluster had logged 154 active cases.

Prior to the Intan cluster was the Bayan cluster, which first reported several positive Covid-19 cases among workers in a factory in Bayan Lepas.

To date, the cluster has logged a total 153 active cases.