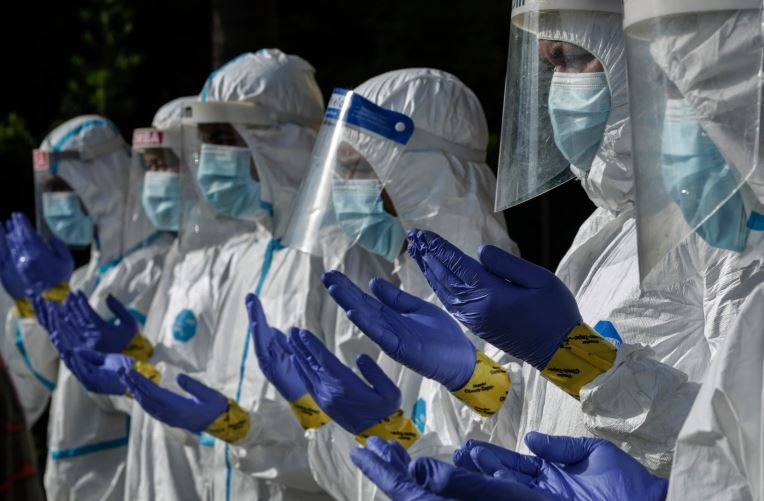 Kuala Lumpur, Malaysia – As Malaysia celebrated its national day at the end of August, it appeared to have brought COVID-19 to heel.

But two months later, the Southeast Asian nation of 30 million people finds itself confronted with a brutal resurgence of the virus centred mostly on Sabah on the Malaysian part of Borneo.

Malaysia’s poorest state, like the rest of the country, has been shaken by political manoeuvring since a power grab within the ruling coalition led to the collapse of the federal government and the emergence of a new political alliance under Prime Minister Muhyiddin Yassin.

After politicians linked to Muhyiddin tried to topple Sabah’s state government, an election was called for September 26. But as politicians and their entourages travelled across the mountainous state canvassing for votes, COVID-19 was also spreading.

“Some estimates show that about a third of the population are not citizens with limited access to healthcare and every incentive to avoid it for fear of arrest. Against that backdrop, the recent elections involving multiple gatherings, a lack of compliance with SOPs (protocols) and extensive travel probably fuelled the current wave of COVID-19.”

Daily cases across Malaysia have topped 1,000 for the past three days, more than three times higher than the peaks during the second wave of the outbreak in June. More than half the cases have been in Sabah, where people have been dying from the disease on an almost daily basis.

Movement restrictions have been imposed not only in the Borneo state but also in Kuala Lumpur and the surrounding state of Selangor as well as a number of other districts in Peninsular Malaysia.

Dr Noor Hisham Abdullah, the Director-General of the Ministry of Health, said on Wednesday it would probably be three more weeks before the curve would be flattened and urged people to stay at home as much as possible and comply with protocols if they did go out.

“That is the way to control COVID-19 and break the chain of infection,” he said at his daily media conference.

The outbreak has now emerged as a considerable headache for Muhyiddin, who broke with the previous administration to work with parties that were defeated in the last general election in May 2018.

With a majority of just two in the 222-seat parliament, the prime minister has been buffeted in recent weeks by forces from within his own camp and in the opposition, raising the prospect that his government’s first Budget – due to be tabled on Friday afternoon – would instead become a vote of confidence in its ability to lead the country.

Last month, in a move that shocked many Malaysians, Muhyiddin proposed a state of emergency that would have allowed him to bypass parliament and avoid the vote.

The move was rejected by the king who instead urged Malaysia’s bickering politicians to work together for the sake of the country.

The government has already said the economy could contract by as much as 5.5 percent this year. Recovery in 2021 will depend partly on how the pandemic plays out – not only in Malaysia but elsewhere in the world.

They told him the government would get their backing if the spending plans included six measures – among them more money for the health ministry to fight the pandemic, enhanced social protection and an extended loan moratorium.

Lower-income Malaysians were already suffering as a result of the lockdown that was imposed from March until June and effectively closed down all but the most essential sectors of the economy.

Families on the Edge, a study of low-income urban families commissioned by UNICEF (United Nations Children’s Fund) and UNFPA (United Nations Population Fund), found that cash assistance provided by the government in an earlier relief package, had eased some of the pressure on Malaysia’s poorest, but it also found high levels of vulnerability, particularly among households headed by single mothers, the disabled people and the elderly.

“Many Malaysians were already vulnerable prior to the pandemic,” said Muhammed Abdul Khalid, head of public policy group DM Analytics Malaysia, who worked on the study. “Between 2016 and 2019 despite the economy growing and GDP [gross domestic product] per capita increasing, relative poverty in Malaysia increased to 17 percent.” A family with a monthly income of 3,000 Malaysian ringgit ($724) is considered to be in relative poverty.

The report found one in three adults in low-income families were unemployed and 68 percent had no savings, slightly better than during the initial lockdown but worse than in 2019. Many had also cut spending on more nutritious food as they struggled to pay rent and bills.

“The families in these households they are really trying their best to find a way out of this,” said Stephen Barrett, chief of social policy at UNICEF Malaysia. “They have demonstrated a lot of resilience and a lot of dignity, and they want to get back to work.”

Experts say with millions of people now back in a partial lockdown and no indication that the pandemic will end anytime soon, the cash payments are crucial.

She also believes a more comprehensive social protection system is necessary to ensure that the poorest Malaysians do not fall through the cracks. “We must stop the perpetuation of poverty and break the cycle,” she said.

Experts also say the government needs to pour more funding into healthcare – currently at about 4 percent of GDP and split roughly equally between public and private – and ensure more medical staff are given permanent positions rather than left on a contract.

The needs are most acute in Sabah.

The health ministry has deployed medical teams from other parts of the country, as well as army medics, to support the state’s health system and tackle COVID-19, which has been most severe around the coastal areas in the east and in the state capital Kota Kinabalu.

(Translation: An RMAF Airbus 400 took off this morning from Subang to Tawau carrying equipment and a field hospital team. The hospital will be set up in the Tawau Sports Complex. It will be used to treat non-COVID patients especially for medical, surgery and O&G services).

Civil society groups and everyday Malaysians have also stepped up to help the state’s most vulnerable groups, including the large number of undocumented people – many of whom are from the Philippines which lies not too far from Sabah’s eastern coast.

“More resources need to be channelled to Sabah to fight COVID,” said political analyst Oh Ei Sun who is from the state. “The numbers there compared with everywhere else are quite staggering.”

Beyond the budget, analysts say Malaysia must also improve data sharing and cooperation between federal and state governments, including those, like Selangor, that are not controlled by Muhyiddin’s allies. The election in Sabah brought to power a Muhyiddin-friendly administration.

“Governments should err on the side of more transparency – not less – because more transparency will build public trust during a pandemic and allow better analysis from multiple stakeholders who may be able to dispassionately review the information because they are not on the front-lines,” noted Dr Khor.

That trust has been tested not only by the political manoeuvring but also a perception that the rules are not enforced as strictly for ministers and politicians as they are for everyone else.

Last month, police said they would not be taking any action against Plantation Industries and Commodities Minister Khairuddin Aman Razali who went on a trip to Turkey in early July and did not complete a compulsory 14-day quarantine on his return. The health ministry fined him 1,000 Malaysian ringgit ($241) for the breach in August.

During the Sabah election, politicians and their entourages were also seen campaigning across the state sometimes without adhering to guidelines on masks, social distancing and other measures. It was not until the day after the election had taken place that people returning to the peninsula from Sabah were required to take a COVID-19 test on arrival. A 14-day quarantine was recommended, but not made compulsory for those who tested negative.

Meanwhile, every day Senior Minister Ismail Sabri announces the hundreds of arrests of people found breaching protocols on mask-wearing, physical distancing and other measures designed to reduce the spread of COVID-19.

“It’s not so much about the fact that the state election took place but that there was seen to be unequal treatment,” Yeoh said. “This has been a theme throughout the year; the inconsistent application of the rule of law and politicians being let off the hook compared with ordinary people. Things like that have definitely caused anger.”

Muhyiddin might have stepped back from the emergency, but the virus continues to spread and there is no guarantee that the jostling for position among the political class that has plagued Malaysia this year is about to disappear.

The collaboration on the budget suggests some differences might have been bottled, but as long as Muhyiddin’s majority remains razor-thin, analysts say it will be tested.

“The passage of the budget does not preclude future efforts to unseat the government,” said Oh. “It’s a one-time special deal. I don’t think you will see a substantive lull. I think the politicking will continue almost immediately.”