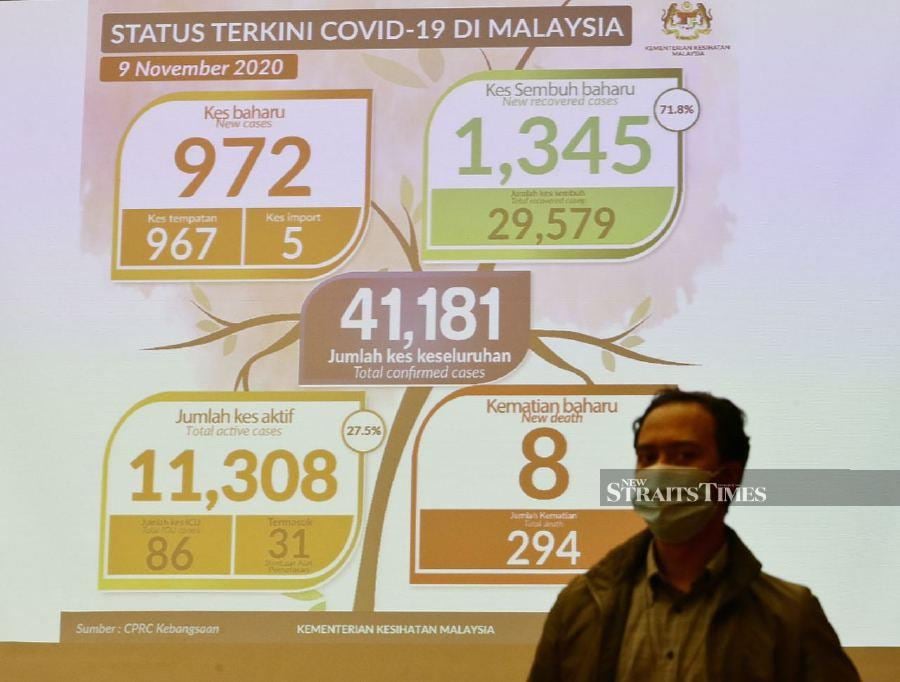 PUTRAJAYA: On a day when the authorities should have been happy with the fact that the country saw a record number of recoveries, Health director-general Tan Sri Dr Noor Hisham Abdullah was instead worried about something else.

The past 24 hours ending noon saw 1,345 recoveries, by far the largest number to date since the Covid-19 pandemic hit our shores.

What caught Dr Noor Hisham’s eye, however, was one small little fact that most may have overlooked.

In his daily press briefing yesterday, he highlighted the fact that the number of new daily Covid-19 cases in the Klang Valley and Negri Sembilan today, when viewed collectively, surpassed that of Sabah, raising fresh concerns over the situation in the affected states.

From the nationwide total of 972 cases, the Klang Valley and Negri Sembilan recorded a combined 425 cases. From that total, 260 were from Negri Sembilan, 138 from Selangor, 22 from Kuala Lumpur and five in Putrajaya.

True, Sabah had 370 new cases, which if compared to each individual state, was still the highest. But, that combination of Selangor, KL, Putrajaya and Negri Sembilan, geographically close, was a worry to Dr Noor Hisham.

Announcing this today, Dr Noor Hisham said Negri Sembilan alone had 10 active clusters, which contributed to the rise in numbers.

Of the new cases, Dr Noor Hisham said five are imported while the others were local transmissions.

“A total of 86 cases are in intensive care, with 31 requiring ventilator support,” he said.