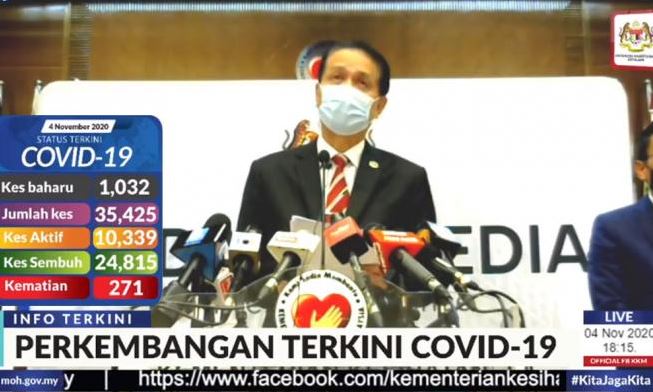 The Covid-19 death toll in Sabah has now exceeded the number of deaths reported in all other regions of the country combined.

The Health Ministry said that seven deaths were reported in Sabah while Perak reported one. The cumulative death toll for Sabah stood at 138.

Sabah accounted for 50.9 percent of the country’s total Covid-19 death toll, which stood at 271.

Of the seven victims in Sabah, two were foreigners. The victims’ age ranged from 56 to 83, with the median age being 63.

The one death reported in Perak involved a citizen, aged 79. All victims have comorbidities.

Sabah continued to report the highest number of cases (62.6 percent) followed by the Klang Valley region (23.6 percent), which saw a spike in new cases from existing clusters.

Of the 1,032 new cases reported today, only three did not involve imported cases. A breakdown of the new cases is as follows:

The largest was the Sandakan Prison cluster. Prisoners there were tested on Oct 27 which revealed 39 were positive so far with 254 results still pending.

The Dialisis cluster, meanwhile, involves the Sandakan and Lahad Datu districts in Sabah where the index cases were detected upon the screening of health workers on Oct 23.

A total of 19 cases have been attributed to this cluster.

The Sepanggar cluster involves the Kota Kinabalu district in Sabah where the index case reported symptoms on Oct 24. Eight cases have been attributed to this cluster so far.

The Aero cluster, meanwhile, involves the Petaling district in Selangor. The index case was detected after close contact screening on Nov 3. Further tests yielded a total of 11 cases from this cluster.

The Lengkuk cluster involves the Sepang district in Selangor and the Port Dickson and Rembau districts in Negeri Sembilan.

The index case reported symptoms on Oct 28. So far, 24 cases have been attributed to this cluster.

The Gading cluster involved the territory of Putrajaya and the Seremban district in Negeri Sembilan. The index case was detected during close contact screening.

Seven cases have been attributed to this cluster so far.